For near strangers, that was way too much fun!!

It is a sheer wonder that this meeting ever actually took place. That it happened in Lalita’s house was also not something I would have guessed. For all that, the four hours somehow went away without us realizing much at all. Let me see if I can unentangle the whole thing.

First there is Lalita. Last year, I had located her to be in Pune. She and I went to the same school in nursery grade (that is pre-kindergarten). After that year, I had met her twice in my life. On Saraswati pujo day in 1980 (in Raja, Tata and Mithudi’s house) and then on Saraswati pujo day in 1984. When I found her out last year, I had called her up and she promptly let me know that she had no recollection of our meetings or having gone to school together for a year but admitted that while she had heard my name. She was gracious enough not to put the phone down immediately. Instead we talked for a long time about our common batchmates.

The next is Jayita. Again, I had met her only twice in my life. But I have distinct memories of both those meetings. Nishi, I believe, had given me her number last uear. And when I had called her up, she too had no recollection of me. At least, she too, admitted that she had heard my name.

Before coming to Pune, I had asked if Lalita would have an hour to meet up. She, not only jumped at that (did I mention she did not know much about me? 🙂 ) but insisted that I came over for lunch at her place. I threw all my arguments of time being too precious to be wasted on hosting duties and all that at her and somehow convinced her we would meet outside.

She suggested that she call two of her batchmates from Durgapur too. Jayita was one of them. Since I knew her, I called her too and let her know that I was hoping she could join us. Well, I am not sure what happened but I think I got arm twisted into meeting at Lalita’s house anyways and all my protestations were summarily dismissed. Lalita was going to call another batchmate – Manvir.

When it came to Manvir, we were true strangers. Neither one of us had ever met or talked to each other. To the best of our combined knowledge.

The fourth person there Lalita’s husband – Bidyut-da. This is where the real twist comes. Bidyut-da and I are again complete strangers. Unlike Manvir, he was not even my batchmate. And yet, among all of the folks there, he was the one who somehow knew most about me! And he was the one excitedly waiting to meet me. So much so, he took a day off from work so that we could meet!!

Over hours of meeting and some incredible Bengali and Punjabi cooking – thanks to all the three ladies – we found out that these four seemingly strangers were interconnected by an uncanny set of intersection points that. Strange, how the rich tapestry of life can be so unpredictably familiar.

I will skip Lalita and Jayita’s connections with me – since we were batchmates, we were bound to have a lot of common friends from the batch. Also, since I had talked to them before, I had established as many of those connections as I could.

Bidyut-da had heard a lot about me from a gentleman called Swarup-da who was his fellow batch mate in REC, Durgapur. Swarup-da, as it turns out, helped me prepare for NTSE exam during 1981-1983. That was the starting point. And then as we traced down our lives, there were way too many of those connecting points. Of course, Lalita, herself is an intersection point for both of us. Then I found out that his sister lives bang opposite Sharmila’s parents’ place. Who I had visited just a couple of days back.

Bidyut-da talked about another classmate of his – whose brother lives very close to where we were meeting that day. And that gentleman is none other than Ranjan Ghosh – my classmate from fifth grade to tenth grade! I wish I had some time in the evening to go meet him but I needed to head out for Mumbai. I further found out that Bidyut-da and Lalita were particularly close to our next door neighbor from the early 1980s and I had absolutely no idea of that! Got a good update on that family from them. I had lost touch around the early nineties.

Coming to Manvir, other than our common batchmates (although we were in different schools), I could not think of any possible connections I might have with her. Turns out I could not have been any more mistaken. She and I have some strong intersection points that brings us all the way back to Atlanta. Manvir is married to a Bengali. She talked about a couple from US she knows thru her sister in law and how she has met them many times when they have visited Kolkata. She further talked about how she has accompanied the husband for shopping and helped him pick sarees for his wife. And a few more minutes later, I discovered that the said couple is none other than our own good old friends Swapan and Jaba in Atlanta!!!

Speaking of connections in Atlanta, there is of course another Manbir (similarly pronounced but differently spelt). A quick pointer here. For Punjabis it is pretty common to have the same first name be used for boys and girls. Well, Manbir used to live in Atlanta and is now in south Georgia. He and I go back to 1977 – we were classmates for 6 years. And I found out that the two Manbirs’ (or Manvirs, if you will) dads are brothers!!!

Like I said, we were having so much fun finding out all these connections that we completely forgot that we were supposedly strangers. In fact, we were so excited that somewhere, Lalita’s two daughters joined in to observe all the fun we were having.

Eventually, I had to take leave. I do not think we had finished learning about our life journeys yet. Hopefully, we will get to meet again. 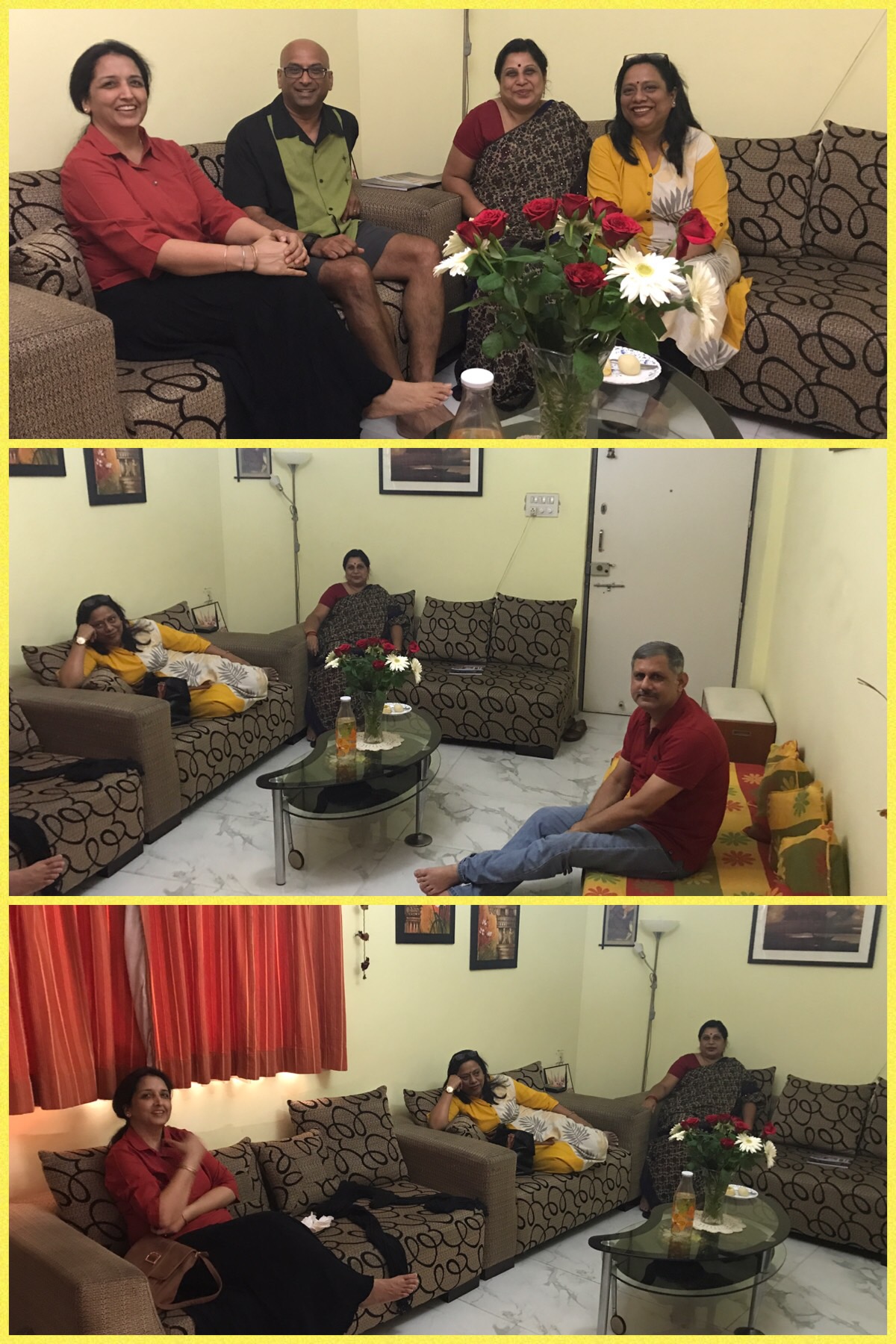