Another disappointment leads to a new intersection point

Remember how I went to see Lavern at Phoenix – missed her – but landed up meeting Mikey after so many years? A somewhat similar thing happened again before I wrapped up my business trip last week.

The last meeting for the last day was over around 5PM. Dinner with office folks were set around 7PM. I had 2 hours. Of course, the first instinct was to check out another Gin distillery. The one that I had my mind on was Aviation. It is one of the original gin distilleries in Portland and is a pioneer of what is called American style gin. This style is lower on the juniper side and higher on the citrus front.

Google maps said they were open till 6 PM. Managed to convince Anand to drive us there. We probably reached around 5:20 or so. And they were closed!! With a big “Private Party” sign on it! I could see that there was nobody inside but there was no way to go in.

Totally disheartened, I was wondering what to do. I still had time. Anand suggested that we check out some other distillery. Instead, I suddenly remembered something. I asked him – “Isn’t the Doubletree nearby here?”. He confirmed that it was. (He has moved to Portland a few months back). “Let’s go. I will introduce you to a friend there”.

And that friend is somebody I had met about three years back. Joel was the bartender at The Den in the Marriott downtown hotel. One lonely evening when virtually no one was there, we got to know each other. I wrote up about him back in 2014. I still remember he teaching me a few new cocktails and I winning the contest of who could name the strangest vodka. (I said Sriracha vodka. Yes, there exists such a thing).

Presently, both Anand and I walked up into the Doubletree bar which was extremely crowded but we managed to get near the bar. The barman looked at us and asked “How can I help you?”. And the next thing he said was “Hey, it is you”!! He recognized me in one shot.

He even managed to get us two empty chairs at the bar. In between all the running around he was doing, we managed to catch up on each others’ lives. I had gotten to know his story about early childhood before. Now I found out that he has gotten married a few months back and more excitedly, is looking forward to his first European trip ever in a few more weeks.

I told him about my research on gins. In the meanwhile, he had my favorite evening drink made for me and Anand – an Old Fashioned. He taught me a different way of making it that he had learnt from two famous bartenders. Basically, you do not muddle the orange peel or the cherry – you just add them as garnish. The syrup and bittesr were in perfect proportions. Anand declared that it was the best old fashioned he ever had. It was certainly one of the best I have had.

In the end, he was getting busy and I had a dinner to go to. Joel lined up all the gin bottles he had to mark my research on gins and then Anand took a picture of both of us!!

That was a great time had meeting a person I had accidentally met and made friends with three years back. This meeting was far more deliberate (although luck was involved) and renewed our friendship!! 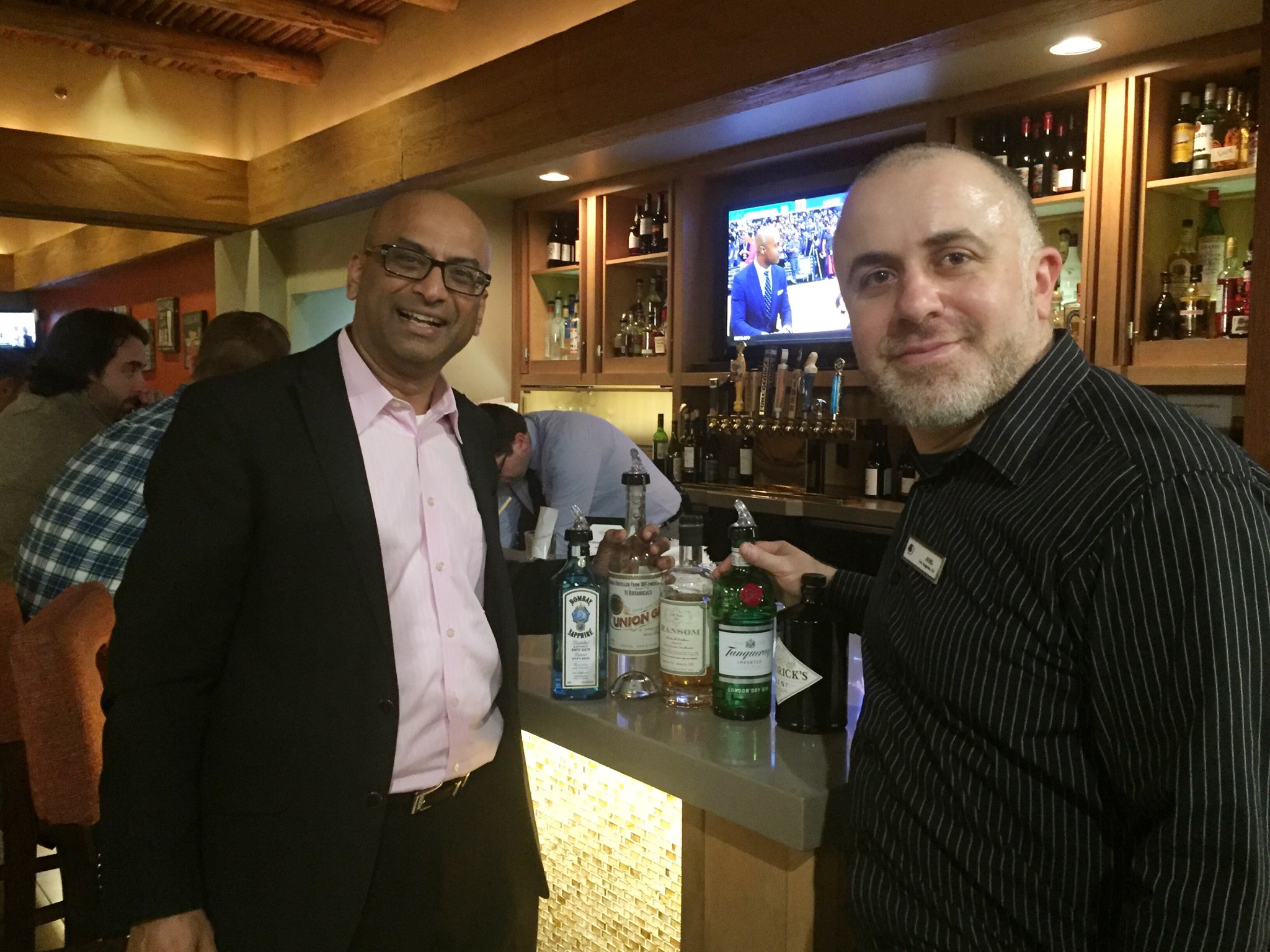