The countdown never stops. You just reset the clock.

There are few things that qualify as being more “American” than being a new house owner. With a mighty mortgage interest to pay, I might add. It was barely five minutes that I had walked into my first house in Texas than when an elderly lady (turned out later I found out she was my dad’s age) came to introduce herself. That was my first meeting with our the-then-neighbor Lavern. Later, we got to know her daughter Melanye who was my age and Sharmila and Melanye had kids almost at the same time and we just became great neighbors. Lavern bought a Maltese dog. Natasha got so attached to it that eventually we had to get our own Maltese.

Unfortunately, life has a way to tear you apart. First, we left Dallas. But I kept up with Lavern. Never missed going by our house when business would take me to Dallas. Never missed talking to her on her birthday.

Then the walk thru the darkness started. She called me up one day to let me know that Melanye had met an untimely death. Frankly, I still block myself off from that and have not processed it totally. Jim – Lavern’s husband, had taken a turn for the worse. They moved to Phoenix. Then he passed away. She made me promise to her that I will visit her when I come to Phoenix.

The phone calls continued. And then one fine December 2nd, the call said that the number was not valid no more. No problem, I said… she has new numbers. So, I sent her an email. I know by rote her email id. I had helped her set up the AOL account. Mail bounced back!! I was helpless. I had no ability now to reach out to Lavern. In USA!!! I tried a few usual tricks – checked Facebook etc for her or her other daughter (I got to know her too). No luck!

For about three years, I continued to search the internet for property records and white pages to look for her. I had narrowed it down to one address but no phone number. And three years later, I was in Phoenix airport to drive to Tucson this week.  I had my math worked out. I would dash to the address – surprise her and in 45 minutes start screaming down I-10 for the Board member meeting in Tucson.

Except that she did not live in that address!! However – and there is a long story about who I met there – I will write about it later – but, I did find Lavern’s new address and that was all I needed. Presently, I pulled into a complex that has been built for seniors. After going thru security, my biggest problem was finding the house. I was going around in my car all over looking for house number 322. Stopped three people in the complex. Very old folks. But very helpful folks. Nevertheless, of no help to me since they did not know or remember how the numbering scheme worked in their place. One even had to yell at her husband to remind her what their own house number was. [Some day, I want to sit with that couple – you know – just to spend a little time with them]

In my frustration, I was going from street to street and one point, in my desperation, I backed out so hard, the wheel of my rental car hit something. I came out to check the damage. Fortunately, it was only the tires and rim that were scraped. Thanking my luck, I came back and sat down in the car. Looked up – and there it was – house #322. Hallelujah!!! Heaven knows, I needed that break!

Parked the car – not so legally, I think – there and ran in thru the gate.

Pressed the bell. No response.

“Lavern?”, I yelled again hoping to wake her up from her afternoon sleep,

There was a muffled “Yes?”. Somebody was desperately trying to wake up from sleep.

Good news – somebody was there! Bad news – nobody that sounded like Lavern.

Very afraid that I had hit a wall, I bleated out “Lavern, this is Rajib here”.

You can imagine me. Here is a brown stranger barging into an Arizona house with a small but finite possibility of getting shot for mistaken identity. I had to quickly establish that I was not a burglar or anything. So, I put my office jacket on that I was carrying in my hand. Like that was going to help me against the bullet 🙂

“Lavern?”, was my next – and completely unthought thru step.

“Huh?”. This time the voice was clearer. And was certainly in the process of waking up.

Wait a minute, Rajib, I said to myself. You know that voice! Wait… Wait…Wait… and then I yelled

“Mikey, this is Natasha’s dad. Your next door neighbor from Coppell”.

“REALLY???” was the yell that came out from inside. He recognized me in on shot. A lot of noises inside the house later, out came a sleepy guy in sleeping clothes. And the only think I could recognize was his face.

We hugged each other for what seemed like ages.

Over the next 15 minutes or so, we reconstructed her lives back. Turns out he moved from Texas to join a community college in Phoenix and live with his grandmother. He has plans of going back to Texas (Texas Tech to be precise) soon. Lavern, unfortunately, was at a bible study at that time. I missed her. But I got to see Mikey.

I apologize, I forgot to mention to you – the kids that Sharmila and Melanye had around the same time? – they are Natasha and Mikey. You can see why we were close. Thru the whole time, he kept saying – “I can’t believe you came to see us”. And I was like “I can’t believe I am with you”.

“I have something to show you”, I told him.

You see the night before I started my weeklong business trip, I had searched my photo database and saved out a few pictures of Lavern from nearly 20 years back, hoping to show them to her when I met her. For whatever reasons, I found and saved some pictures of Mikey too! And the dog that inspired us to get Princess!!

I showed him the picture!

He is the guy in the red sweater with that Maltese dog, by the way!!!

I had to take leave soon. Else I would be late. But not before I had taken down Lavern’s new contacts.

“Lavern, if I could keep my promise the first time after so many years, I certainly can do it the second time. You just keep yourself healthy. I will be back”.

And the countdown started….clocks had been reset….. again…. 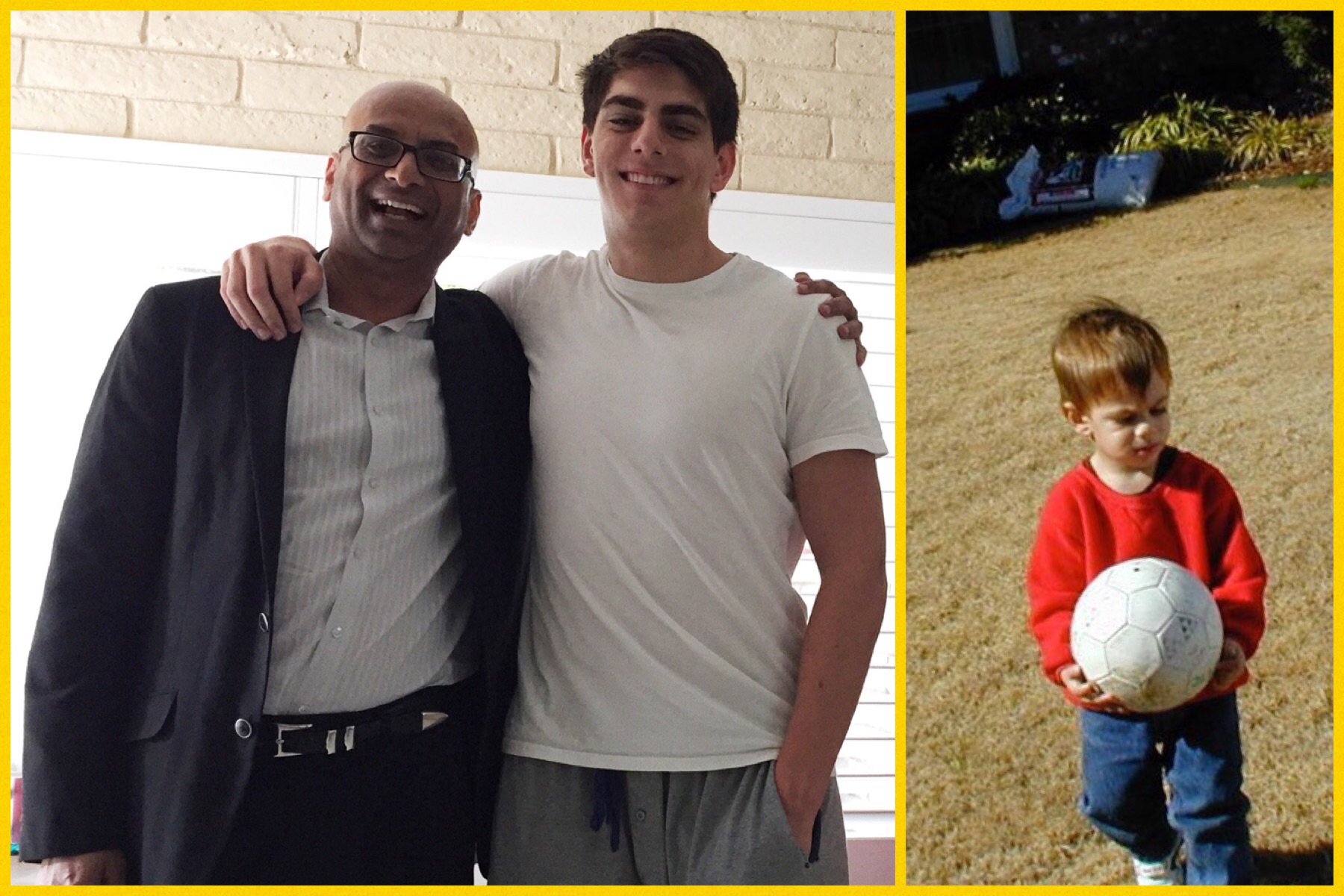