Second half marathon of the year

Technically it was a rest day for me today after the 10 mile run in the hills yesterday that entailed a total climb of 80 floors. Last evening though, I got a crazy idea. I am going to hit 51 soon. I started wondering how much can I push my body to endure at this age. Ergo, decided to join the Chalupa group for a run this morning instead of taking rest. At any point, if the body started complaining too much, I was going to pull over and walk back.

The first few miles were pretty enjoyable. Partially because I was distracted as Samaresh, Sanjib and Arup who were ahead of the pack with me kept talking and cracking jokes. By the time we came back to our starting point, we had already completed four miles. Went back to the trail to meet up Mrinal-da who was bringing up the rear guard of the group and gave him company all the way back. That made it five miles. But I sensed that I could push the body some more.

So, after the mandatory Chalupa group picture, instead of going for Starbucks with the rest of the team, I dove back into the trails. And that is when the “walk thru the desert” started. Without any company and the trail being near desolate on a cold and cloudy morning, I started losing tempo and motivation soon. The sixth mile was getting boring. The seventh one was very slow. On the eighth I could hear my feet dragging. And the left knee, occasionally, would sting a little.

Stopped at the end of the eighth mile. I was still two miles away from the starting point. Needed to do something to get motivated. Started stretching the left leg – especially the calf, quad and the hips. And waited for a runner to come by who I could then run along with. Not a single one came by after waiting two full minutes. So, tried a different approach. I do not like listening to music while running. I feel one should always be very alert while running in trails. But I got the iPhone out and started a Noorani sisters’ song.

The booming voice of Jyoti started with the “Chan kithey gujaari aayi”. Not that I was too sure myself where I had gone but the quick beats of the song got me back to a faster pace. And as I ran faster, I realized that the muscles were complaining lesser. I guess the repetitive stress points had shifted to other parts of the muscles. And just like that, very soon, I was back to the starting point. 10 miles down.

My stupidity usually is boundless. Having done 10 miles, the next idea came – how about a half marathon (13.1 miles)? While I was energized by the last two miles mentally, physically I was starving. My entire food intake in the morning was a cup of coffee. Thought for a second and then went back to the car, retrieved the apple that I had kept for post-run recovery and post-run be darned, quickly devoured the apple. Almost immediately regretted it. I started feeling the cramps as a penalty for eating too quickly and not keeping myself hydrated adequately.

If I sat down, the cramps would increase. My best shot was to try and power it thru by staying distracted. All I needed to do is get to the one and a half mile marker somehow. If I could do that, regardless of how I came back – limping, dragging the left foot or even walking, it would be a half marathon distance. I went for negative splits. First half at 10 min/mile. Second one I speeded up to 9:30 and the third half went for a 9:00 min/mile. Good news? I was so breathless that I never once worried about the cramps.

Slowed down on the return journey and just the thought that I was a few minutes away from a half marathon run was enough motivation to finish up the rest of it. That 13 miles and change makes it 31 miles for this month. The math oriented ones probably realize this already – 13 and 31 are not only reverses of each other – their squares are reverses of themselves too!!

Now, one problem though: Everywhere I go, all the local Atlantans are greeting me and each other with a big “Rise Up” scream. And I am, like, “Dude! I can barely sit down now. What do yo mean Rise Up”? 🙂 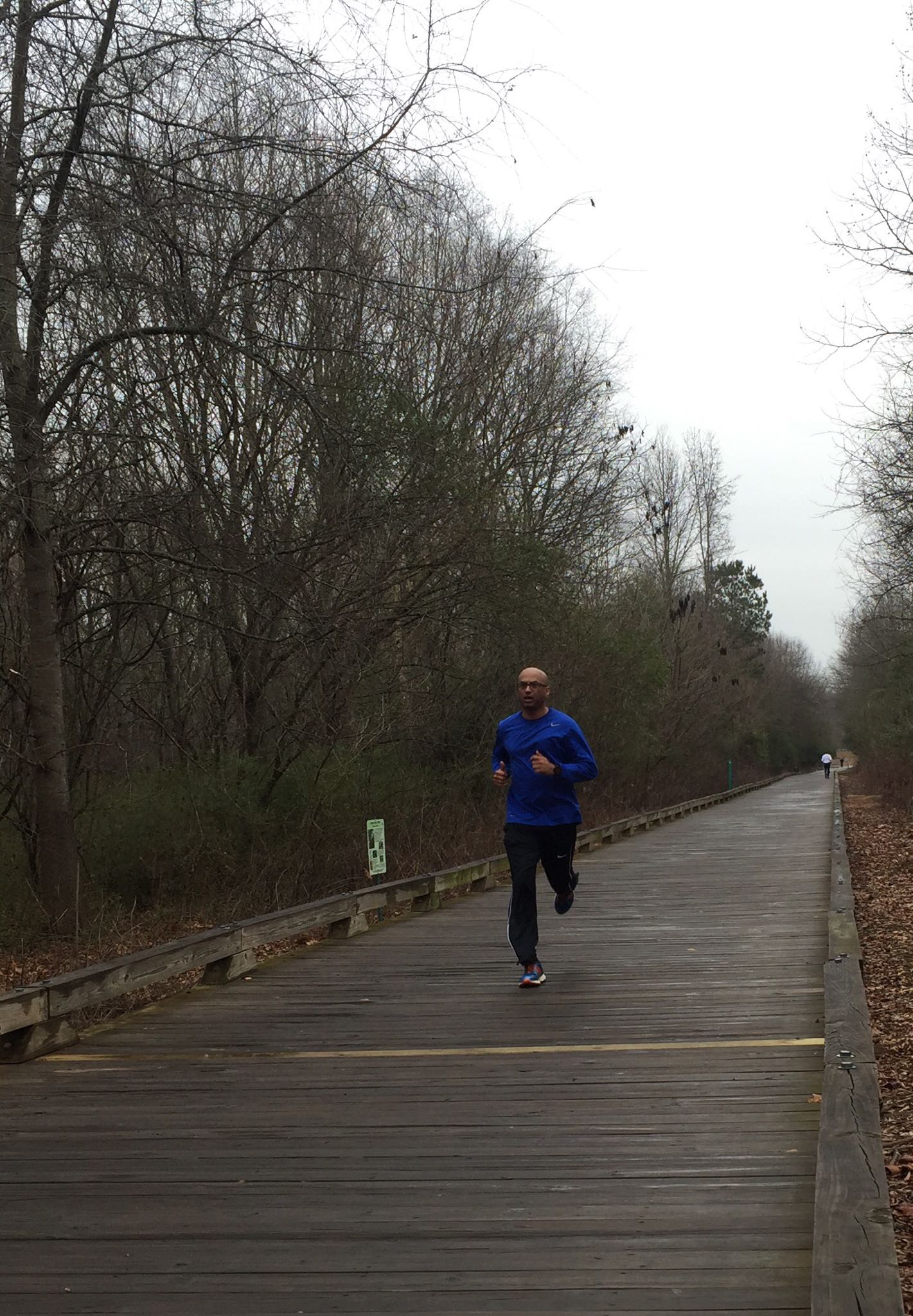