The CFO, who had come to check on the ruckus, just shook his head and went back at this office. What he thought upon seeing Miriam convulsing with laughter almost on the floor and then myself, sitting on one of those big round plastic balls that people often keep in office, with a silly grin on my face – only he will know.

As a brief background, Miriam was the HR head of our department and I had strolled into her office – as I often did – and was fabricating a story – which I also often did. The end goal was to tell her a joke. But she had not a clue of that as I spun a yarn about some fictitious Catholic girl called Mary Rose who I had met in Mumbai when I was working in the SEEPZ area. As Miriam kept on taking in the story – hook, line and sinker, I proceeded to expound on the topic of my heart being stolen by this Mary and how that drove me to great heights of poetry. Except that I was terrible in writing poems. But that never dissuaded me from expressing my fondness for this lady with some choice placements of even more choice words. I gave an example to Miriam…

One Mississippi. Two Mississippi…. And then it hit her!! The suddenness of the ending and the ultimate realization that she had been totally taken in for a ride made Miriam guffaw out so loudly that the aforementioned CFO – who was a few offices away – had to come and inspect for himself! I am sure he went away thinking I must have asked for a raise and that was Miriam’s reaction!!!

Nearly 17 years later, I caught up with Miriam in DC area last week! She was waiting patiently for me at the restaurant after my flight got delayed. I am glad she did. I would have killed myself for missing an opportunity to meet this wonderful person after having missed her a couple of time earlier already.

Of course, no meeting with Miriam is ever complete without we talking about Mary Rose. On the other end of the spectrum, she reminded me how I had made her intensely furious once. I think this story is best told by her. But as she recollected – we were in a meeting – my manager, my peer group and she from HR. She had just finished laying out some HR transformational change (Miriam thought it was Banding) that she wanted to do. At the end, our manager looked at us. One by one, everybody gave a thumbs up after some engaging discussions with Miriam. Finally, it was my turn.

As Miriam explained, it was apparently a scene out of a movie called “Twelve Angry Men”. I do not watch movies at all, so I cannot vouch for it. But in essence, when Miriam thought she had wrapped up everything, I piped up for ten fifteen minutes and must have said something completely incoherent, but at the end of my talk, one by one each one of the peers retracted their thumbs up. Finally, our manager concluded – well, it was a consensus. We would not move forward.

Consensus, if you discount Miriam that is. That evening, at our watering hole in the Omni hotel bar, the two of us had to sit in a corner far away from our compatriots, with me getting yelled at by a much red-faced Miriam. I kept sipping my Oban 14. I can take a lot of yelling with a Oban 14. She is the one who did not drink 🙂

Like we reflected last week, we grew up so much together thru those laughters and those fights. I have always admired Miriam as one of those rare HR persons with an incredible sense of business and I would not be what I am today without some of those shoulder rubbings I had to do with her earlier in my career.

The one person I bitterly missed during dinner is her husband Waleed who I have never met but have quote a few common interests. Both of us play the tabla, are runners and mix cocktails. There are not too many people with whom I can discuss singers like Ahmad Wali, Komal Rizvi, Akhtar Chanal and so on. There was a point of time when Miriam got into another argument with me over dinner. She thought Gul Panra was from Afghanistan (where Miriam is from) and I was sure she was from Iran (I love the rendition of one of her Farsi song s- Man Ahmad E Am). At one point, I left the dinner table, walked out in the rain to the parking lot – much to the wonderment of the restaurant staff – grabbed my iPad from my car and came back to the table. Then I looked up the singer’s history.

Turns out Gul Panra is from Pakistan!!

You see, through all those laughter and fights, sometimes, we used to be both wrong!!!

May your tribe increase Miriam!! 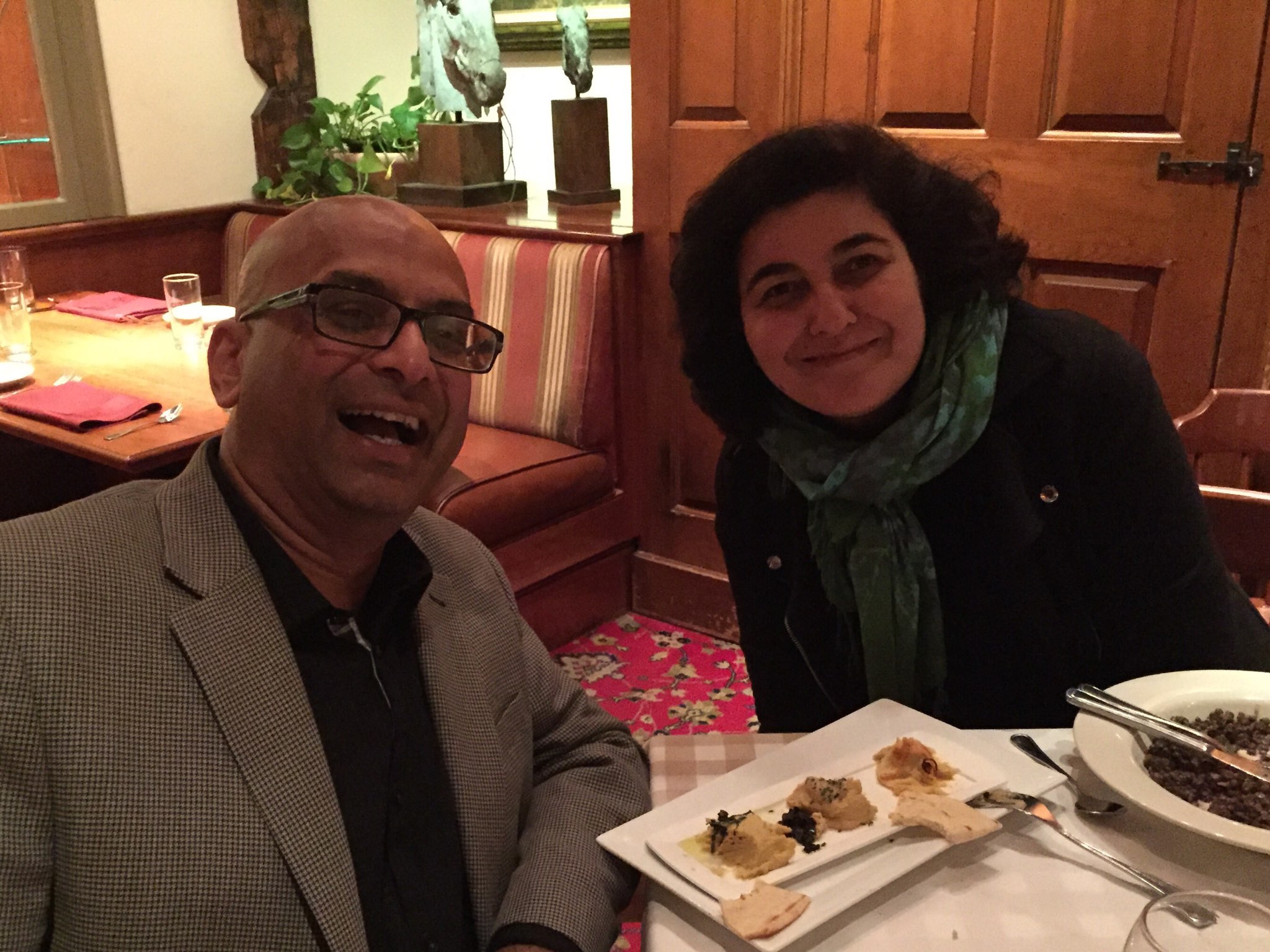