I think she has figured me out quite well.

As many of you know, I enjoy going to a grocery store with roughly the same level of fervor as I enjoy having a hole in my head. I guess today was one of those “you gotta have a hole in your head” kind of day since Sharmila asked me to pick up something from an Indian grocery store which was close to where I was meeting a friend.

Now, let me tell you something. If there is one thing that confuses me more than a grocery store, it is an Indian grocery store. At least in a normal grocery store, I can wander around listlessly with not a clue where to find the stuff but nobody would be any the wiser since they are big stores and I usually do not run into anybody I know. In an Indian grocery store, somehow, there will always be somebody who will walk up to me and address me by my first name. Which, experience has taught me, is a strong indicator that I have met them before and ought to be addressing them back by their first names too. Except that, for the life of me, I would not remember where I had met them, what their names were and why do I even know them. In the bargain, I would also forget which aisles I had already visited and eliminated as possibilities and would have to start from square one (which is usually the lane left of the entrance door) again!

But I was impressed this time with the precision of Sharmila’s instructions. Absolutely no room for doubts or errors. As a result, most of those people who would have otherwise recognized me did not do so today since I was walking around like a zombie with my head down staring at the iPhone. I am fairly sure they thought I was some idiot playing Pokemon Go in the Indian grocery store.

On the upside though, that was an well executed shopping exercise for me. Kept following step by step and after I bounced off a couple of counters – muck like a snooker ball bouncing off the edges – I was quickly shot out of the store into the parking lot with a couple of fresh chicken tikka masala boxes in tow!

Like I said, I am very impressed with the precision of her instructions. I think she is about a few parentheses and a couple of well placed comments away from writing out some good computer code!! 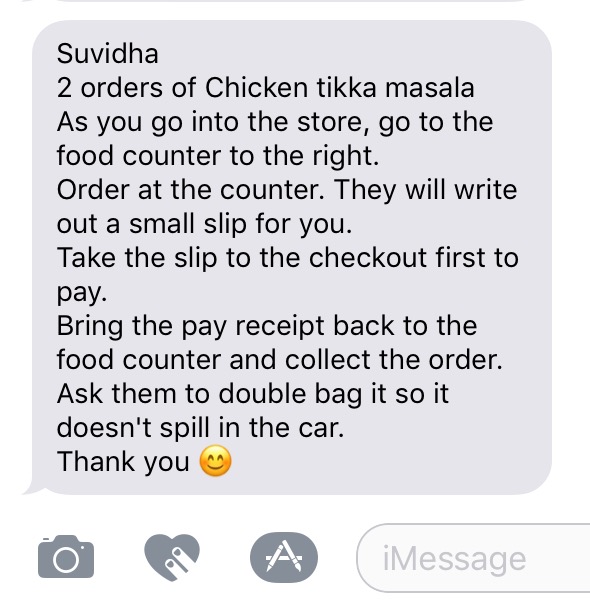