Seventeen minutes of delay… a life time of learning.

The flight from Chicago was to leave at 6:45 pm. I had thirty minutes at hand and I was casually strolling along the sprawling airport just observing people. It was not normal for me to be on the road on a Friday evening and I had switched myself off from work. I had only a backpack with me and I was planning the reach the gate around 6:30 and be one of the last persons to get in.

As I casually shuffled towards my gate, suddenly a gentleman asked me “Are you from Illinois?”. I looked towards him and realized he was one of those folks that you will find at an airport often selling from a kiosk. In Atlanta, I have seen a few of them trying to sell Delta Amex cards. I assumed he was selling American Airlines credit cards. Usually, I would give a polite “Sorry, but I have enough cards” and move on. This time, I stopped and told him “No”. He asked me where I lived and I said Atlanta.

“Yeah, I have a few minutes at hand. Anyways, there is going to be a crowd at the gate”, I said.

We said Bye to each other and I started walking to the gate again.

It was at that point I started getting some pangs of regret. He was a very nice guy, Why did he talk to me? He did not try selling anything to me. What was he selling anyways? I had a lot of questions. Halfway to the gate, I looked back and then looked at the watch. I had no chance of going back and talking to him again.

I guess Lady Luck was with me today. Upon reaching my gate, I noticed that my flight was delayed to 7:02. Seventeen extra minutes. I figured that was a sign. I walked back to the gentleman and his kiosk. He was busy doing something in his kiosk when I walked up to him and said “My flight is delayed. Would you have some time to spare for me?”.

And that is how we struck up a friendship. Found out that Doug is from Chicago and has spent all his life in a southern suburb of Chicago. He is between jobs and is doing this to bridge him through. Before this, he was in graphics printing. Very soft spoken, he came across as a very nice person.

I also realized that he was not selling credit cards. He was actually trying to convert customers to move to NRG – an energy company. I did the math quickly. Once he realized I was from Atlanta, I was not a potential customer for him. (NRG is not there in Atlanta). So, he had remarked about my apparent lack of hurriedness instead of trying to sell me NRG.

I was intrigued how effective was that method of selling that product.

“Ten on a good day, two to three on a bad day”. That surprised me quite a bit.

It was at that point we talked about his previous job and how this is a temporary thing for him till he lands on his feet firmly again.

“Why did you come back to talk to me?”, he suddenly asked.

“Oh! I like making new friends. And I thought you were nice to me and I did not get to know you that time”.

“You are a very nice person too. I can see you are not from Chicago”

“Chicago people are very rude.”, he said, somewhat surprising me.

And then he went on to explain the worst part of his job. “I hate the way people treat my like ####. You will be amazed how people will show me the hand and walk away. I know they are in a hurry. But why treat me like I am below them? I am just trying to do my job”.

I was not sure what to say. “I am sorry to hear that”, is all I could come up with. And a couple of exchanges later, I told him I had better gotten back to my plane. And managed to get a passerby to take a picture of us.

“I hope to meet you down the road again”, I said, as I waved him good bye for the second time.

As I slowly started my walk back to the gate, my mind flashed back to the numerous times I would be irritated by the sight of those credit card hawking folks at Atlanta airport and do everything to avoid eye contact. Even pretend to be on a call.

“I am just trying to do my job”…. those words of Doug kept coming back to haunt me. I realized that out of my fear of having to deal with an uncomfortable situation, how I have fallen terribly short in acknowledging another person as a human being just trying to earn a livelihood. Repeatedly so. How would I have felt if I was in their shoes?

In almost any encounters with a human being – any human being, we are not required to show grace and class. And that is the one good reason why I should be showing both. Every single time.

With very mixed feelings of regret in my own behavior but elated that I now have one more nice friend in my life, I finally walked into the plane. With the hope that I will be a better person next time when I see them.

And if any of you had nothing better to do than make  a new friend in Chicago O’Hare airport, swing by near Gate K7 or so and say Hi (and one from me too) to this gentleman in the picture. As he will tell you, his name is Douglas Smith. 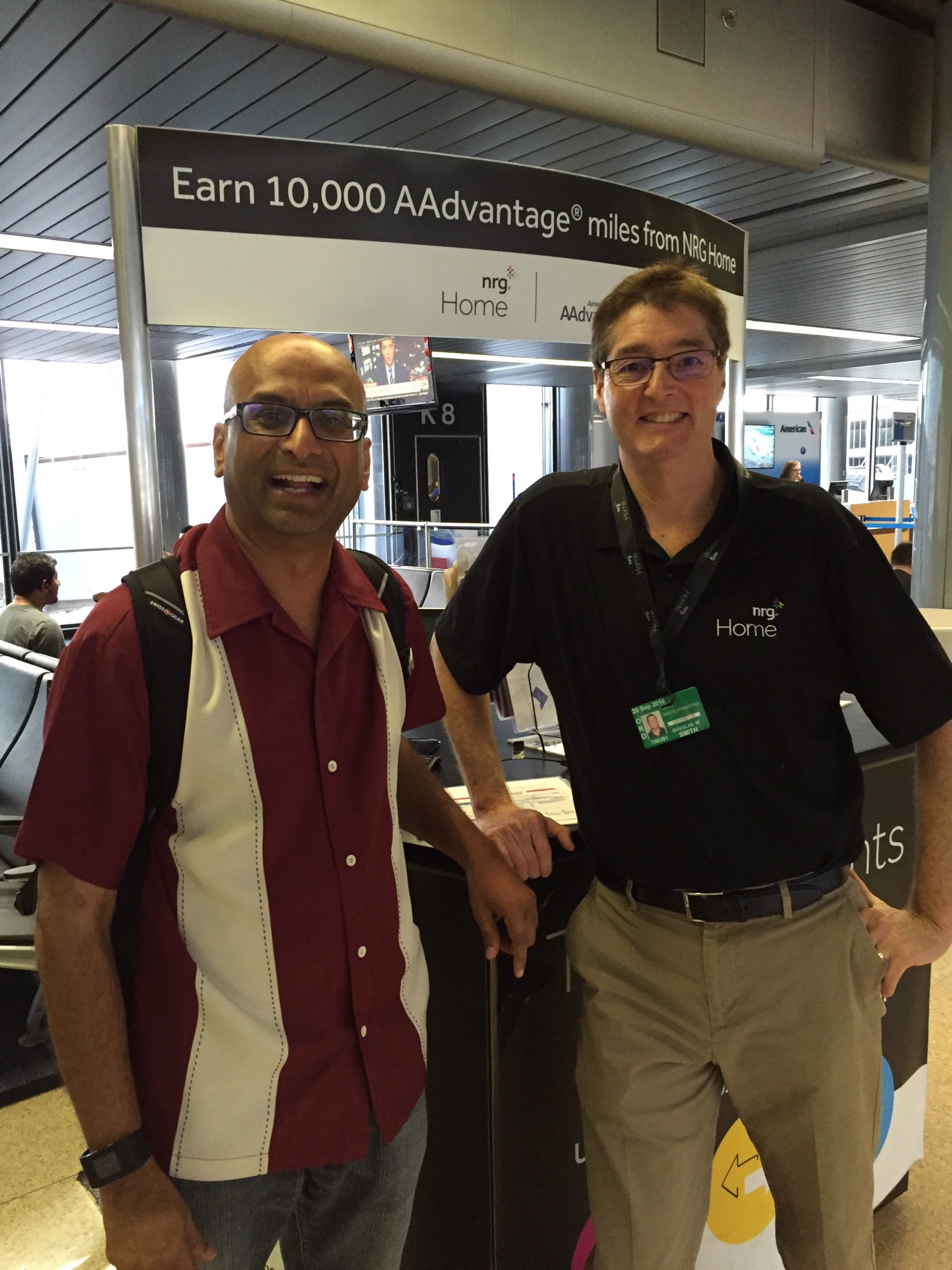