That was a scary run…

Well, the day was filled with meetings in Philly (PA), then Lanham (MD), Chevy Chase (DC) and then finally Dulles (VA). I figured I had earned myself a nice run by the Potomac river at the end of the day. I wanted a new spot instead of the usual places I have run from before. Decided to try the Potomac-Heritage Trail which has a lot of historic importance from the Civil War. After changing into running clothes at a nearby Subway, I drove to the trail head at Seneca.

It was still hot – mid nineties – and sunny when I hit the Seneca Connector Trail. The first 0.7 miles was shaded and easy since it kept going downhill. Then I joined the Potomac-Heritage Trail. After running for another mile or so in merciless sun, it suddenly occurred to me that I had not seen any trace of a river. Stopped to check Google map on my iPhone and realized that I had taken the wrong turn when I entered the trail. Given that I wanted to see the river and certainly wanted shade, I turned around and headed back.

It was a little confusing when I came to the original point where I took a left turn instead of a right. The trail very quickly turned technical on me – barely one person could pass. It was continuous ups and downs and a lot of roots sticking out. I was literally jumping up and down as if I was running on a very hot surface. But I could start hearing the water on my left and that meant I was on the right track.

You can see from the first picture that the trail was steep and worse it ran along the hill – which meant my left and right foot were on different heights on the ground. (see pic) It was very painful. And then just when I thought I was close to the river, things turned real ugly. The trail moved straight up and away from the river. I could not see the river – just a small trail in front of me. But I pressed on.

After a few minutes, I was quite sure I was getting lost. First and foremost, I had not yet seen anybody on the trails except for a couple and two dogs at the very starting point. For a trail to have been on Google maps, I was expecting a much wider trail. Then the trees became dense. And it became dark. And I realized a terrible decision I had made. I had my sunglasses on. I could barely see anything. At one point, I saw a dark something on the ground. It probably was a branch but fear had started taking over my mind. I thought I saw a snake. I cleared it by a foot and a half and just kept going – did not even want to look back.

As I plodded thru the dark – partly out of determination and partly out of fear, I suddenly got some hope – the trail started going down. Which turned out to be worse – because now, with every step, I was slipping an inch or two (it had rained here in the DC area). And then the worst happened. The trail stopped. Whatever little trodden over bushes was guiding me as a trail simply vanished. I had a couple of tall trees ahead of me. I took off my glasses. That did not help.

Long before, I had lost GPS connection. My Garmin had started beeping letting me know that it could not measure my pace since it could not find GPS. My Google maps – in a desperate bid to help me – showed my current position to be in an island in the middle of the river a clear half mile away from where I must have been.

I am not sure what got into me – must be the snake – which I am still not sure it was a snake – but instead of retracing my path, I decided to go downhill and get closer to the water level and walk back along the water. At this point, I had stopped running. If anyone of you have never tried walking thru a forest with no trails – you should try it once. That should dissuade you from ever doing it again. That was a steep hill. I was losing my balance fairly regularly. I tried all the things I could remember from physics – aligned my steps along the slope, crouched to keep the center of gravity low but most of the time I was grabbing onto one or the other tree to not lose balance. Sometimes those trees were nothing but a small sapling – but by now, I was in a different zone. I was willing to take any help. What I missed most was my pair of glasses. And I was hoping against hopes that I was not trespassing on anybody’s property. Yelling was out of the question – first, I had not seen anybody and second, I did not want to warn the owner of the property, in case I had trespassed.

Finally, the trees and bushes started to thin out a little – enough for some light to come in. And I could hear flowing water below me. I looked up and for once, luck favored me. Way up, I spotted a dead tree that I recollected I had kept my phone on to take my first picture. That was the best thing I had seen the whole day. So, I started climbing back up to that spot. I learnt something – climbing up a hill forest is far more difficult that climbing down. I could not even stop to take rest – it was too steep for me to balance myself. My best bet was to keep keep moving and anytime I found a tree, I used it to pull myself up.

Once I reached that photo spot, the rest was easy. I was back on the trail and I was going to go down. The only thing I had to watch out for were the roots. And it was getting brighter and brighter – so the sunglass was not a problem anymore.

Eventually, I got back on the connector trail. And then I remembered that I had climbed downhill in the beginning. Which meant I had to climb back up. But I was very very relieved that I was on a proper trail. Reached the rental car and grabbed my bottle of water and then just lay down sprawled out on the ground. A few minutes later, I heard a car coming. I was thinking – “Hey! Another runner. Would be interesting to see where he/she goes”. I got up to see there was a cop looking at me rather amused from inside his car. I took the initiative – “Does nobody run in this trail?”. “Not in this temperature. No, sir!!”. We exchanged some pleasantries and he went away.

I was a little bummed that the Garmin showed only 4.7 miles. It obviously had missed some distance. The Fitbit had increased the count by a full 10,500 steps. Which means I surely cleared 6 miles. But I wanted to see 6 miles (10K) on my GPS. So, I did something that common sense will tell you not to do – I decided to go down the trail for another 1.3 miles!!

Funny thing – this time as I started going downhill on the connector trail, I saw a trail on my right about 0.4 miles in. I also recollected that it was at this turn, I lost the only two people and the two dogs I had seen on the trail. I figured that it was a legitimate trail since they probably took it and decided to finish my run on that.

And then it hit me like the broad daylight!! After all that drama, I was finally on the right trail!!! In fact that was the real Potomac-Heritage trail! I had taken – not one – but two wrong turns. This one was wide, with proper dirt cover and far less steep slope. I kept laughing at my stupidity and kept pressing till I finally got to see the river (see pics). That was one of the branches of the river that skirts around the island; to see the full river, I would have had to run another couple of miles. It was getting too late for me to do that. I had to check in to my hotel, take a shower and go for a dinner meeting.

One funny incident – as I was running on this proper trail, I came across a cleanly laid tree across it (see pic). For a second I could not figure out whether the tree had just fallen or if it was put down to block the trail. You will be amazed how fear can come back in a hurry. My mind was going – “Why did they put up that obstacle? Could there be a bear?”. That is when I had to slap myself and say “Idiot! You spent way too much time in Alaska”.

After taking in the river for a few minutes and a few pictures, I ran back quickly. I was exhausted by the time I came back to the rental car but I did feel very satisfied. Plus my GPS finally showed 7 miles!!! 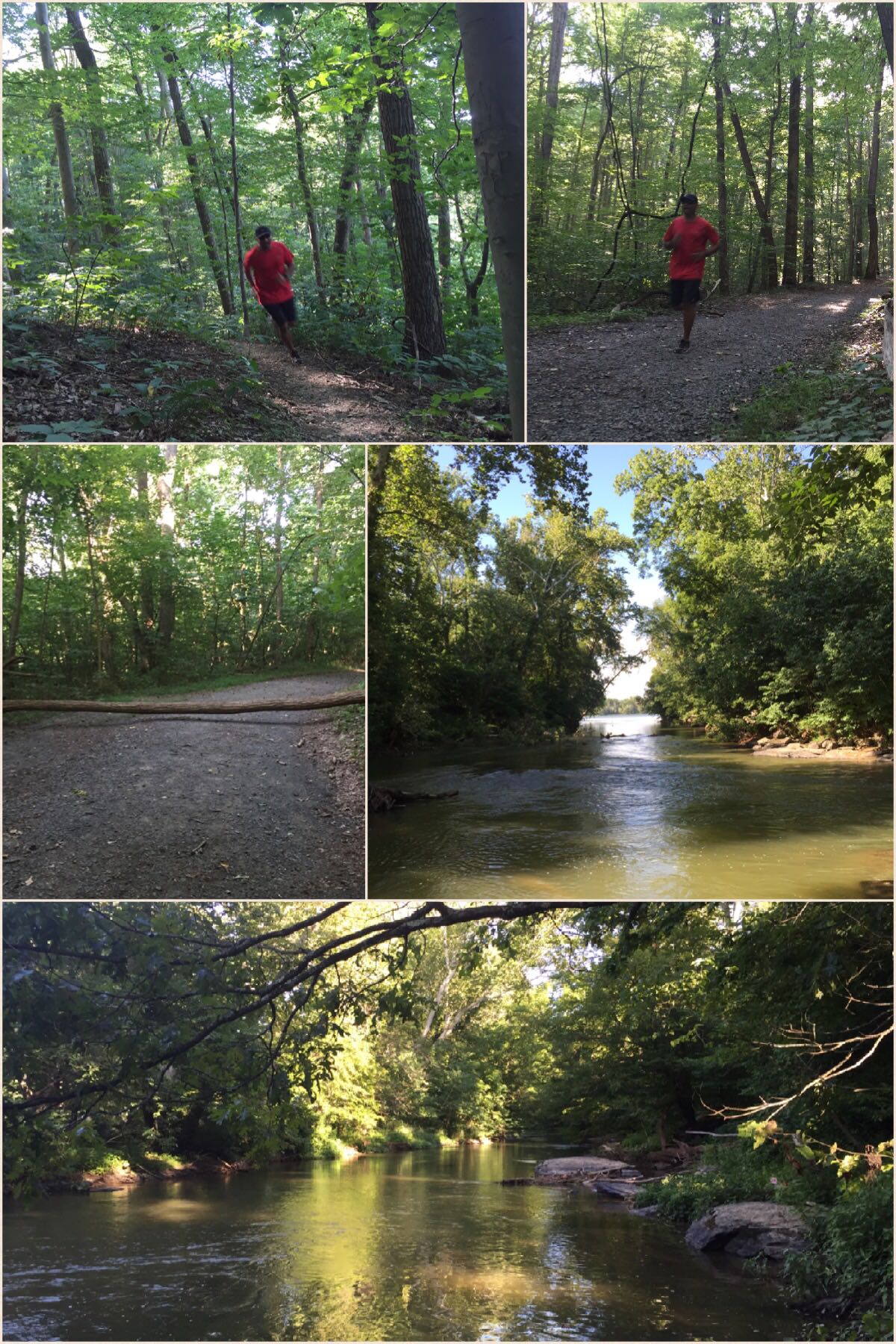