The three siblings – we got up early this morning and went for a long walk. In fact, we covered over 5K. There are always some interesting moments when the three of us go for a walk in Kalyani.

For starters, there are always those intriguing posters. Look at the couple on the right bottom corner of the picture. The first one literally says “Reduce your fat and beer belly. Without any medicine or machinery” (yes, it says machinery). But the best is the last line which says “If required, we can help you put on weight too” 🙂 I was getting flashbacks from my Thermodynamics chapter on mass transfer 😉

The second one basically promised to get you flight tickets, rail tickets and even passport RIGHT THERE. Never mind that was stuck to a lamp post with nary a building in sight!!

My brother and I were intrigued by quite a few plastic bottles seemingly filled with a bluish purple liquid in front of many houses. Our sister educated us that it was done to dissuade dogs from relieving themselves in front of those houses. I found that logic extremely unscientific. To begin with dogs do not have that high capability to decipher colors like humans. Second, it was colored water (which we confirmed later) with no other chemical in it. I just did not see the connection. My sister, however, insisted that it was even featured in local newspapers and indeed there is no explanation why this happens. In the middle of the picture, on the left side, you can see my brother engaged in a discussion with a house owner. If you carefully notice, there is such a bottle on the ground. The house owner told us the same story as my sister. Purple colored water in a plastic bottles keeps dogs away from relieving themselves? I still do not believe this.

In any case, as my brother was having this discussion and I was overhearing, we suddenly realized that my sister was not near us. Sure enough, she had picked up a cute kid from the street and was playing with the toddler. The rather amused dad and brother of the kid was just watching her playing with the kid.

That is the one thing about the Roy family. A small kid or a dog – that is all that it takes us to get distracted and be totally absorbed for hours together. And yes, my brother and sister managed to befriend a dog during that walk too! 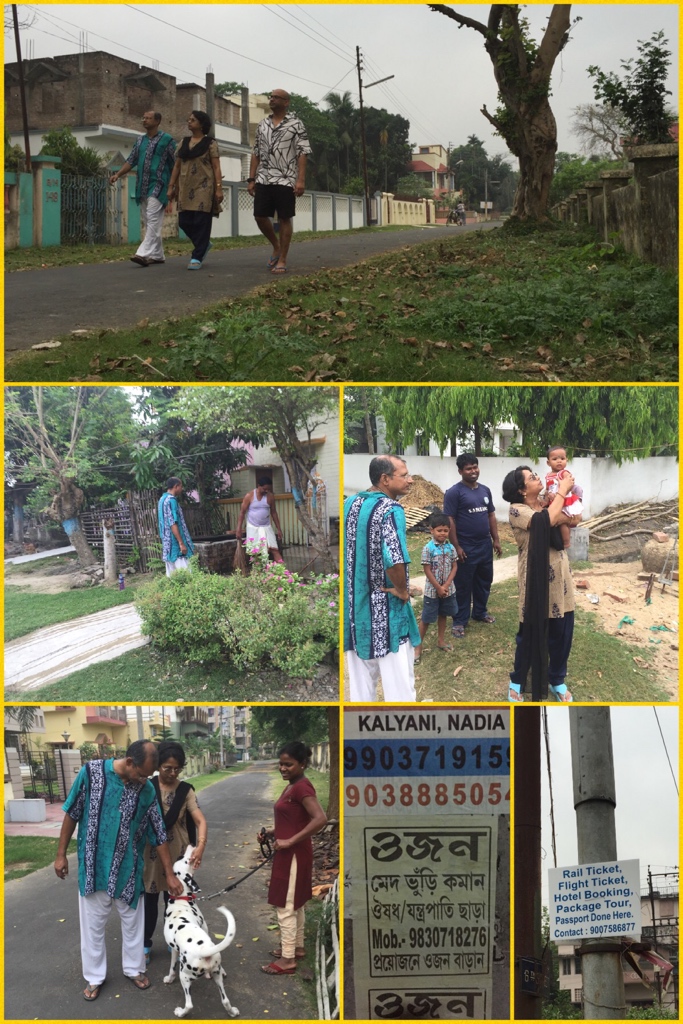