The indomitable spirit of a nonagenarian

Next up after Mr. and Mrs. Biswas was to stop by and check on Mrs. Mukherjee. I had met her for the first time two years back and had heard from her son Amitesh that she is unable to move much these days. Last time, she had come out to the living area to meet me and talk to me. I was aware that she was not going to be able to do so this time.

Fortunately, I do not usually wait for such niceties in life like invitations. Not only did I barge into Mrs. Mukherjee’s house, I went straight to the inside room where she was resting in her sofa. As you can see, she is not able to sit up straight due to her backbone and most of her leg muscles weakening beyond a level to sustain her body weight. What you cannot see is the indomitable spirit behind the fragile bones of this soon to be nonagenarian.

Gracefully dressed in a white saree, she was half-laying and filling her Form 15H. For the Indian tax-ly challenged, that is a form you fill up for taxes to be deducted at source at your banks. The interesting part is she lives with her son, daughter in law, and has access to many others who would be more than glad to fill up the forms. But she insists on reading up the whole thing and filling it herself!!

I asked her how she was coping with her recent bout of illness. She showed me a bell and phone she carries with her whenever she has to move. Apparently, when she falls down, she just lays there ringing the bell or calls somebody on the phone to get some help to be picked up!! Not even once did she complain or feel pity for her condition! There was a walker in the corner of the room – but apparently, she does not even touch it.

As you can see in the picture, we had a good long and intense chat. When this picture was taken (by her son), she was recollecting in a very soft voice – and I am not sure why she opened up to me – about her late husband’s last few days. She described in great detail how he had lost a lot of zest for life towards the end. There was a poignant moment where she described how he was taken to the hospital and she felt the way he said Bye to her, she had a premonition that he knew he was not going to come back…

If I ever live to be a nonagenarian, that is the kind of nonagenarian I want to be. Bent, might be; but never broken! 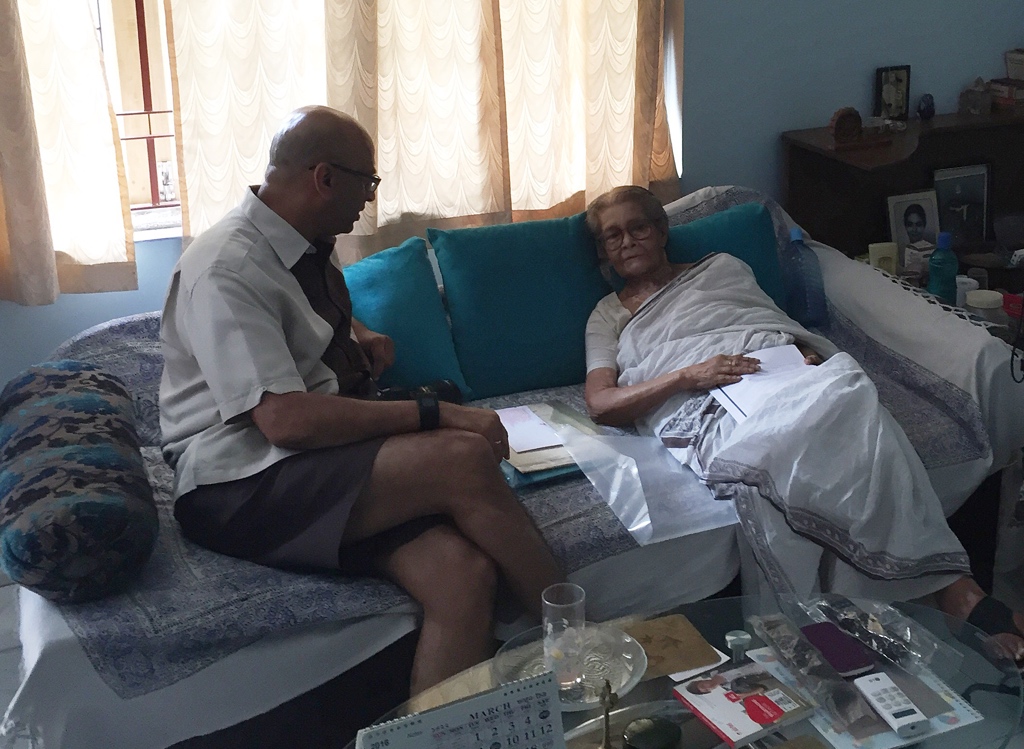