You are never too old to live your dreams…

One of the greatest benefits of living a life on the road is the opportunity I get to make so many new friends from all walks of life. Getting to hear those individual stories of people I meet on the road makes me appreciate everything around me so much more. It definitely makes those getting up at unGodly hours, irritating delays in flight, skipping dinner because I was too late to check in .. far more bearable. In reality, I look forward to them. I write them down and in then moments of personal crises I read them up to get little pick me ups.

Today’s story is about a really old lady – you can see her in the picture. And by “old” I mean the completely archaic way of counting the integral number of times the earth has gone around the sun after you were born. Outside of that sidereal definition, this was one of the youngest and most beautiful lady I have met yet.

Like it often happens, I found myself rushing out of the airport (this time it was Dulles) and scrambling to the Avis bus. It was less an impending office meeting and more of the old windy weather outside that made me walk as fast as I could. Once inside the bus, I was lost in my emails on my iPhone when I realized that the bus had started moving.

I looked up and realized that I was the only passenger. The driver – the old lady in question – noticed that I had taken my nose off my phone and asked if I had a reservation. The formalities done, I figured why not just make friends with her? So, I walked up to the front of the bus and started talking to her. I asked her how long she had been with Avis and then one thing led to the other.

Turns out, Janice has been driving with Avis for the last 5 years. She was proud to point out that she was the only female Avis driver in the Avis fleet in IAD and the oldest one by age! I was curious what got her to driving rental car buses five years back. I am glad I was curious – because I learnt the personal story of this fascinating lady.

Turns out her first love as a child was always about driving big trucks. She did live to fulfill her dreams. And she has driven eighteen wheelers for nearly three decades!!! She has seen the country inside out and loved every moment of it.

And then one fine day, while trying to clean the front of her truck, she slipped and broke her leg. This was in Indiana. Apparently, that was the only time she had to ask for help from anybody. And that was her own son!!! Who apparently is always worried sick what might happen to his mom on the road.

She took six months off to recuperate and got herself the Avis job.
“What is the plan ahead?”, I asked, wondering how she will start tapering down.
“Oh! Once I am fully healed, I go back to driving eighteen wheelers”.

I was absolutely stunned!!

Since I was the only passenger, she drew the bus up all the way to B23 – where my rental car was parked. Before getting down, I asked her if it was okay for me to take a picture with me. She readily agreed. There being no one else, I had to make a vague attempt at a selfie.

As I sat in the rental car, before even I could push that “Start” button, I had to take a few moments to gather myself.

“Wow”, I said to myself, “… to have lived the simple dreams of my childhood and not getting distracted by everything else…. “ 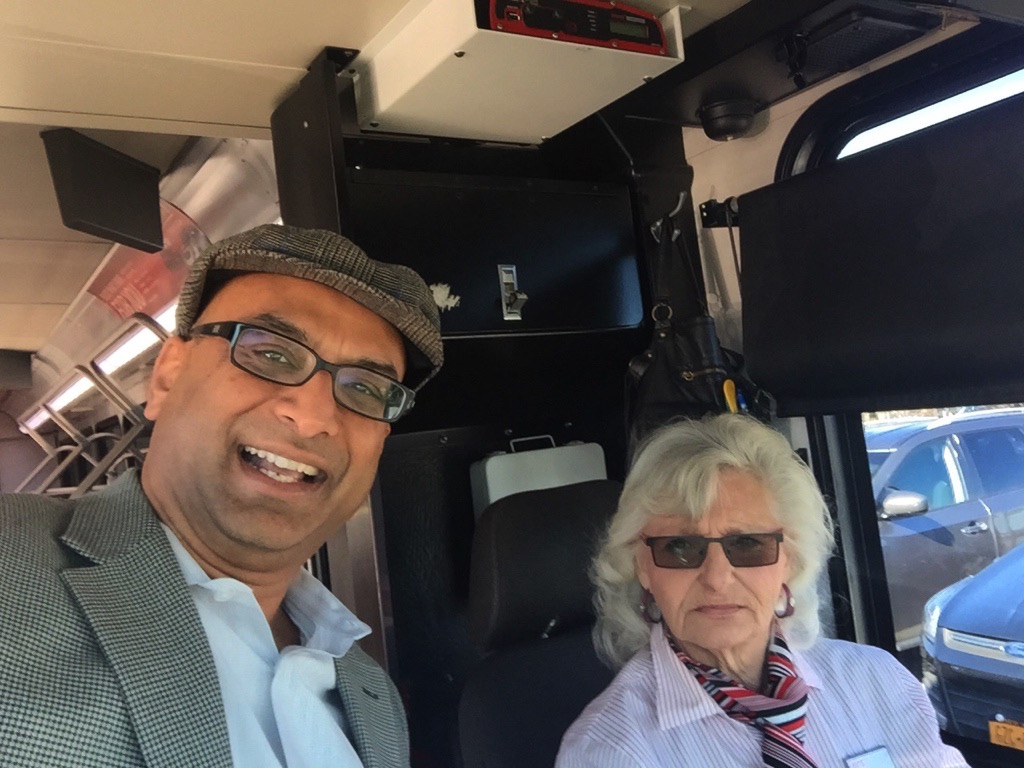