Sometimes, it is not bad if a lady is yelling at you!!

Sharmila is back and that can mean only one thing – I am free to travel again. First working day – Monday morning – found me at the airport even before the sun had risen. Monday morning Atlanta airport – that is a Fitbit wearer’s dream scenario – and a flyer’s nightmare. You can easily log 10,000 steps just walking to the security queue and then weaving your way eventually to the TSA agent.

The good news is that I carry a long list of phone calls to make with me. First it was the birthday phone calls to India and Asia and then my daily calls to mom and my brother. By the time I cleared security, I was already on office calls. Those office calls continued as I went down to the train station and instead of jumping on to the train, just walked from terminal to terminal. Eventually came to my gate and noticed that they had just started boarding. The Fitbit violently vibrated signaling I had reached my goal for the day already.

As is my wont, instead of getting into the plane, I just got onto another office call and kept walking around the gate till the last person had gotten in. I love being one of the last persons to board. But as I was strolling from gate to gate, I suddenly heard – what appeared to be a lady’s voice yelling – “Oh! My God! Rajib???”.

Well, “Oh! My God” followed by your name – that too by a lady, in a uncommon place – is surely going to cause some consternation to anybody. Far more so for a nondescript person as I. I swung around and what did I see?? There was a lady sitting on the floor surrounded by her luggage and smiling at me from ear to ear.

And that is how I met Nancy Yates after a loooooong time! We did business together – well, almost did business together – in a prior life and have kept up with each other thru birthday greetings and all that but I had not seen her for the longest time. The funny part is she had to spend another minute explaining to her office mates – she was on a conference call when she spotted me – the reason for her unforeseen exuberance on the phone microphone.

Anyways, she was on a call and my flight was making last calls. I did get a chance to sit down with her, chat for a few minutes, get somebody to take a picture of us, promised to have a coffee with her soon and dart to my plane.

I was the last person to board. But the memory of seeing Nancy after such a long time will last me a longer time!!! 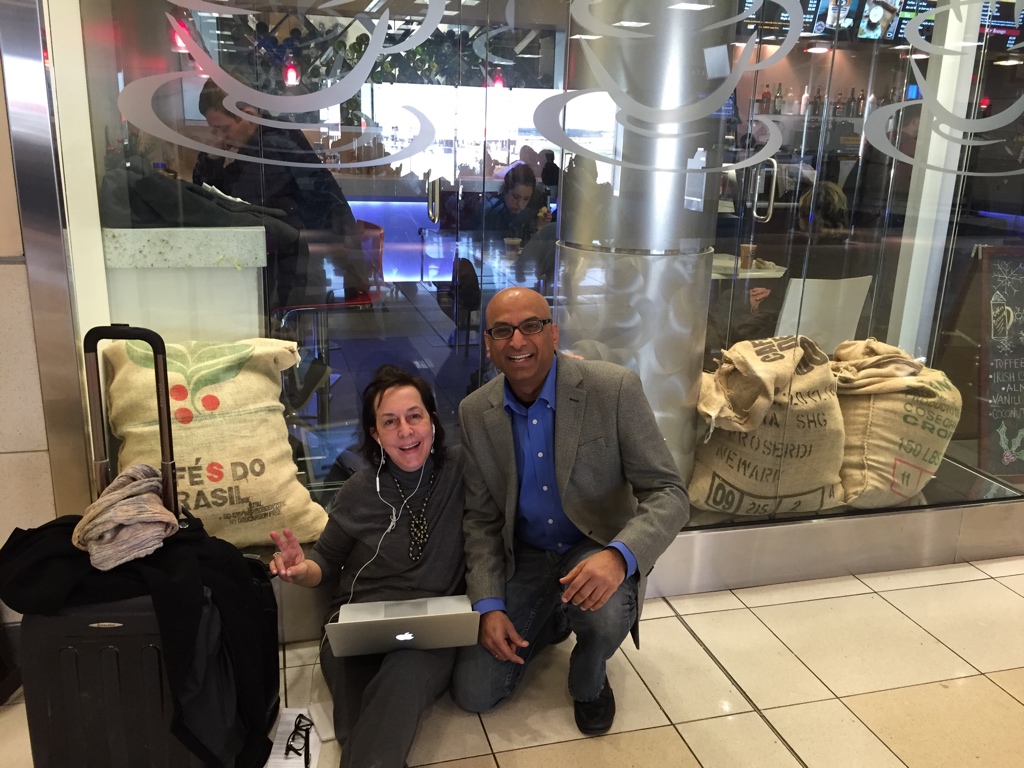