Finally, I managed to meet her!!!

One of the best highlights of my trip to Dallas with family for Thanksgiving a couple of weeks back was that I finally got to meet Vicky. My previous attempts had all come to nought. I came very close almost a year back and in the last moment she was pulled away for some Government work.

Circa 1998 or so… I had barely crossed into my thirties. In spite of my awful capabilities, I had somehow quickly risen very high on the corporate ladder – yes, contrary to popular belief, it is possible to fool a lot of people a lot of times. While I was used to more work and more money, no amount of MBA training had prepared me for my first executive admin. And yet, there she was – Vicky Ruffin Cupit assigned to keep me honest 🙂 If I was the guy ricocheting off the walls, she was the wise person calming me down. Over the years, I did calm down and learned how to stabilize my calendar and communications. I never quite stabilized my travel routine though. I am sure all those “alter egos” I had in office who were assigned to keep me in check would agree. (Agreed Stefanie? Leah? Denise? Kelly? Marte? 🙂 )

While I had kept up with Vicky throughout the years – if not anything else, with that birthday wish every year, I never quite could meet her. That problem was solved two weeks back.

Early in the morning, Sharmila and I hopped into the rental car and headed north from Dallas. We kept driving up I-75 – crossed all the big new suburbs of Dallas and kept driving for miles and miles. Crossed two cute towns called Melissa and Anna and eventually reached the tiny town called Van Alstyne. All this time I was asking myself, how should I pronounce it – vAn alstyne or van alsTYne?

There is something about small towns in America that fascinate me. Part of it is the rural setting – I am any day, a dirt road, lot of land, green trees kind of person. But there is that other thing – the history of how those towns came of being. And then once in a while, against such a rural backdrop, you will see how modern civilization has imposed itself upon it. At the scheduled time, we showed up at our tryst – the only coffee place that was open there. Speaking of civilization imposing itself – it was in a Macdonalds attached to the gas station by the highway!!

There she was … waiting for us at a table. I am not sure how long the hug lasted but there were a lot of good old days that flashed thru my mind. As I have always said, whatever little I have made of myself – and as ephemeral as it might be – it is incredible how many people have lent their shoulders to get me where I am. It has always been an out of the world feeling for me to meet those humans much later in life!

Vicky took me thru the history of the small place. How a gentleman called Van Alstyne had founded the place. (BTW, those other two towns – Anna and Melissa – they were his daughters’ names!). What was even more fascinating was how her husband landed up in a small place called Van Alstyne. Apparently, her father in law and his brother ran away from home and crossed state borders and that is where they were dropped because they could not go any further!!  He took up a job with the local utility company. Many many years later, when Vicky and her husband bought a property, her father in law pointed out the utility posts that he had put in the ground. I did not realize till then that every post has a identification marker and name at the bottom!

As you can imagine, it was an absolutely magical time. Sharmila and I were totally absorbed in the stories. Suddenly, I remembered something. I asked her what happened to her eldest son. I remembered that she had told me that he and his wife drove eighteen wheelers together to transport goods. Apparently they loved the life on the road. That was nearly 20 years back. “Oh! They still are driving eighteen wheelers together. They log about 5000 miles a week!”.

Awesome! Someday, I want to hit the road and just keep driving and meet all those people that crossed my path in this life!! 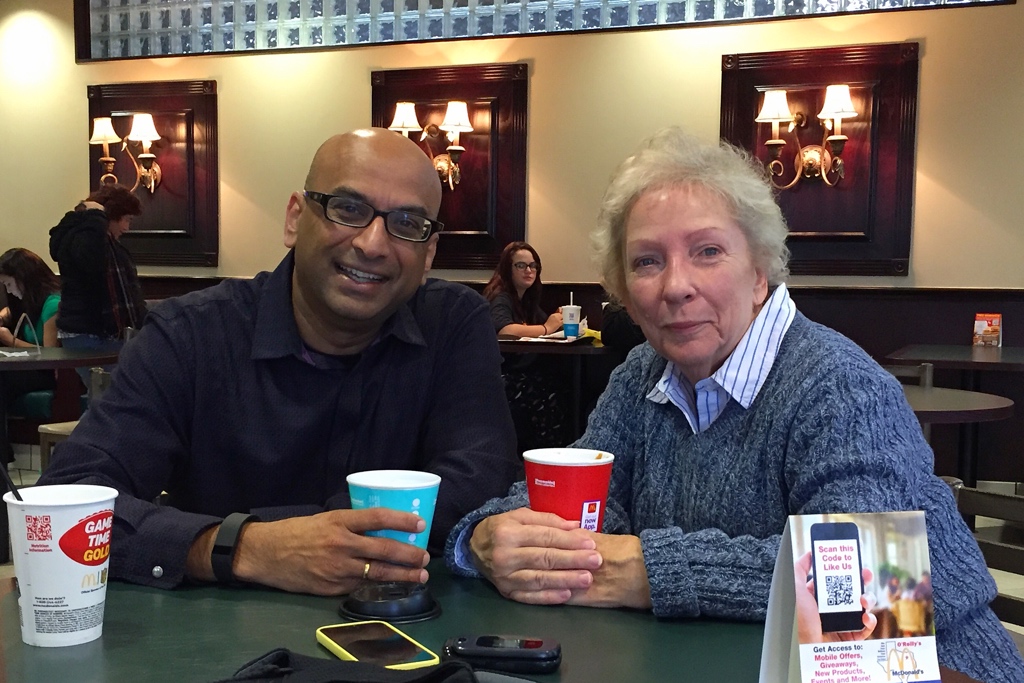