How an iPhone almost failed a ninth grade student…

Way back… and I mean way back… I had read a poem by Lord Byron in my ninth grade:

“Place me on Sunium’s marbled steep,

Where nothing, save the waves and I,

May hear our mutual murmurs sweep;

There, swan-like, let me sing and die:

A land of slaves shall ne’er be mine-

I had always had this dream that if I ever went to Greece, I would want to see what Byron saw in Sunium (now called Sounio). So, ignoring all advise I got from my friends and well wishers on what to see when I am in Greece, I told my tour cab driver Alex (tagged here) to take me to the Temple of Poseidon in Sounio. I wanted to see what Byron saw and also where Aegeus jumped into the sea upon a misunderstanding of the color of his son’s sails (or was it the flag?) of the ship. Upon researching the internet, I had found that Lord Byron had scratched his name on the walls of the temple. [Note that some scholars are not sure whether it was him who put the name there]

Over the course of the day, I became great friends with Alex – but more on him later. One thing I learnt from him was that archaeologists in prior centuries had always thought of the Temple of Poseidon to be the Temple of some Queen (the name escapes me right now – it is all Greek to me 🙂 ). Once they recognized “Byron” on the writings in one of the columns, they recognized that to be the Temple of Poseidon. (the Temple of that Queen was found nearby later but nothing remains today but the base stones). Also, on his iPad he showed a picture of that inscription of “Byron”. He was not sure about the authenticity but gave me a rough idea about which pillar and where in the pillar it was.

We did reach Souniou eventually. It is a beauty that can be only beholden, not described. The southernmost point of mainland Greece, it was a sight to be seen. Pristine clean waters of the Ionian Sea, green islands in the distance and the setting sun…

But what had intrigued me was that reference of the inscription of “Byron”. I kept on searching for that inscription where Alex had told me. Which was not an easy exercise – because we were chained off at least fifty feet off the temple on every side. And when I say “temple”, I mean whatever remains of the temple – which is basically a few pillars. To make matters worse, I did not have a camera (with proper zoom lens) on me. All I had was my iPhone.

But lo and behold – I did find the word “Byron” inscribed – with my naked eye. If anybody has any doubts about what scores between God’s invention – the eye – and man’s invention – the camera – has not yet tried to take a picture of an engraving from fifty feet with an iPhone. The beauty of nature that drove Byron to write a poem took me less than an instant to find. The engraving of the same poet on the walls too me ten minutes to find. The constant adjusting of my iPhone to capture an inscription from fifty feet away with the sun behind? – that took more than thirty minutes 🙁 How I wished I had my DSLR with me.

The unfortunate part was that I was the only other tourist there. If you discount the fifty odd Japanese tourists that had come in a bus. How do I know that they were Japanese? By the number of times they said “Hai”, “Aligato”, the impressive long zoom lens DSLRs they were carrying  and their refusal to understand my English. All I wanted them to do is use any of there sophisticated cameras to take a picture of the spot I wanted and then I wanted a take a picture of their camera screen on my iPhone. All I heard for the next ten minutes was “No English”. So, I tried talking to the guide – and he said “No camera”. Go figure!!

Anyways, I did take a lot of pictures on my iPhone from different angles and different focus points and lighting and I think I might have finally captured enough to show the inscription.

What a great way to thread thru so many moments – Greek mythology of Aegeus, pillars that you see that were built in around 450BC, Byron visiting around the beginning of 1800s, a ninth grader reading a poem in 1981 and NOW!!! 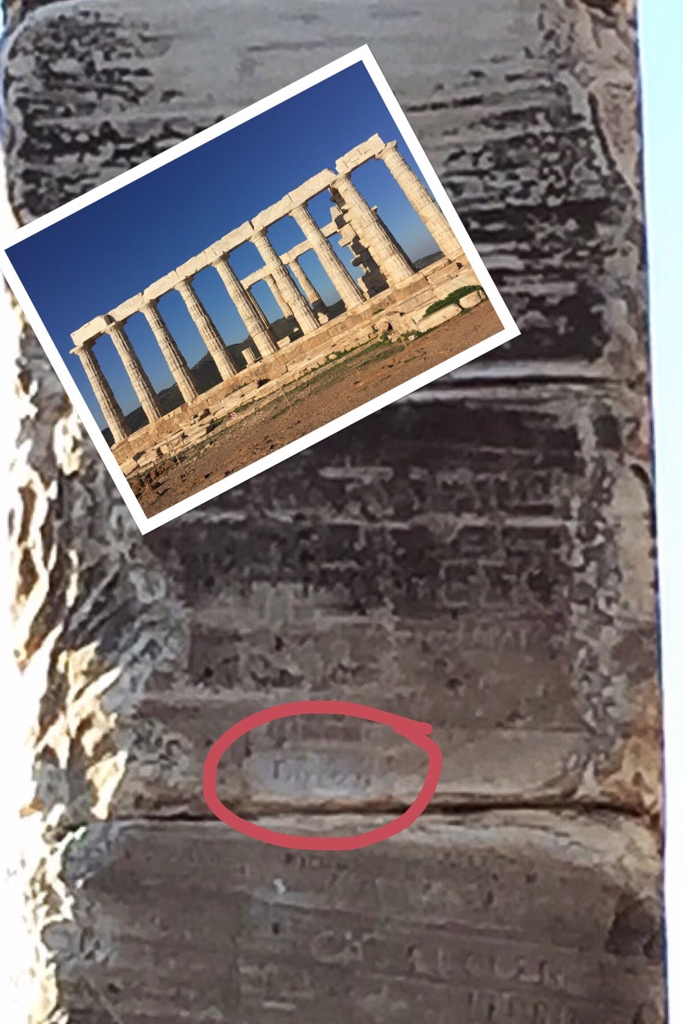