You win some. You lose some.

One of the best times of the day when I am in my dad’s house is the early morning hours when we sit down in the porch watching the day break over uncountable cups of hot tea. Today was no exception. Other than the fact, we talked for a longer than normal time. So long that before we knew anything, breakfast was brought in by mom.

Now a Bengali mom’s breakfast for her son is not to be underestimated by any stretch of one’s imagination. It is a religion unto itself. The sheer rigmarole of preparing a host of dishes – which can be most aptly described as “Carbs R Us” – is daunting enough to wean away those that are weak of the heart. Which is rich in irony. Since that is pretty much what happens to your heart after you partake of a few of those equal parts deliciousness and equal parts cholesterol savories.

We Bengalis might be dark in skin color but you should check out the white in our food. Rice is white but you cannot have that for breakfast. No problems! We shall have puffed rice (“muri”). That “paratha”? Made from white flour fried in diesel errrr… refined oil. Same with the smaller rounder “luchi”. That yellow curry? “Aloor dum” – made from potatoes. That brown stuff? Fried potatoes! Even those juicy yummy dessert items are white “rosogollas”!!!

In any case, my dad and I continued talking thru the breakfast albeit at a far lesser speed. Did I mention that those smorgasbord of white stuff can be as tasty as anything you ever eaten in your life. And you certainly do not want to deprive yourself of the indulgence of going thru the experience by being constantly distracted with small talk.

Towards the end, my dad commented – “Ei je baar baar du din-er jonno aasis. Jiboner sukh dukkher katha boley bhalo laagey” (“I really enjoy talking about all the joys and woes of life every time you come and visit me – although for a few days”). I weighed in his comments. And let the big potato bite first melt in my mouth. Then I fired back “Tomar saathey abaar sukh dukhher katha ki? Sarakhhon to khali dukkher-i katha”. Basically, I took a dig at his always complaining about everything. (which by the way is something I have noticed in all elders in India sans a few).

He stopped chewing his food and gazed into the outside. He had a frown on his face and kept thinking. Then finally admitted that what I said is true. “Sotti, sob somoy dukhher golpo-i hoy”. A full quiet minute later, he asked “Aar sukh-i ba kotha?’ (“What is there to be happy about?”).

I could have launched into a philosophical debate of happiness being a state of mind but I was not in a mood to distract myself from the “fulko luchi” (again a fried bread made from white flour) that I had just laid my hands on. So, I pushed the initiative back to him “Tomar cheye sukh-e ke aachey?” (“Who has more reasons to be happy than you?”)

He was sensing that he might land up on the losing side if he let me control the questioning. So, his quick response as he wrapped up his breakfast was “Se tumi Ambani-r saathey golpo korleo dukkher katha-i bolbe”. He basically implied that if I chat with Ambani – the richest person in India – even he would be talking about his woes and problems!!

The speed of conversation had slowed down considerably. Perhaps with the exhaustion of having to eat so much food. Eventually the maid servant came and cleared out the plates. After she left, my dad had a few very kind words for the lady “Tor maa-er jonno khub korey. Ja bola hoy – taar chey onek besi korey”. Basically my dad was trying to say that the lady was very helpful to my mom (without which my mom could not have managed given her condition). He explained that the lady went beyond the call of duty in getting some things done.

The food was probably starting to digest quickly. Carbs have a way that way. I was starting to spoil for a fight. “Ei ja! Ekta sukher katha boley felley”. Basically I teased him that he had slipped and mentioned something that he should be very happy about.

He laughed out loud startling me (and also making me realize that he is in a much better shape now; I had not heard him laugh like that for almost a year) and said “Khub hoyeche Ja. Uthey por ebar”. He unceremoniously shooed me away 🙂 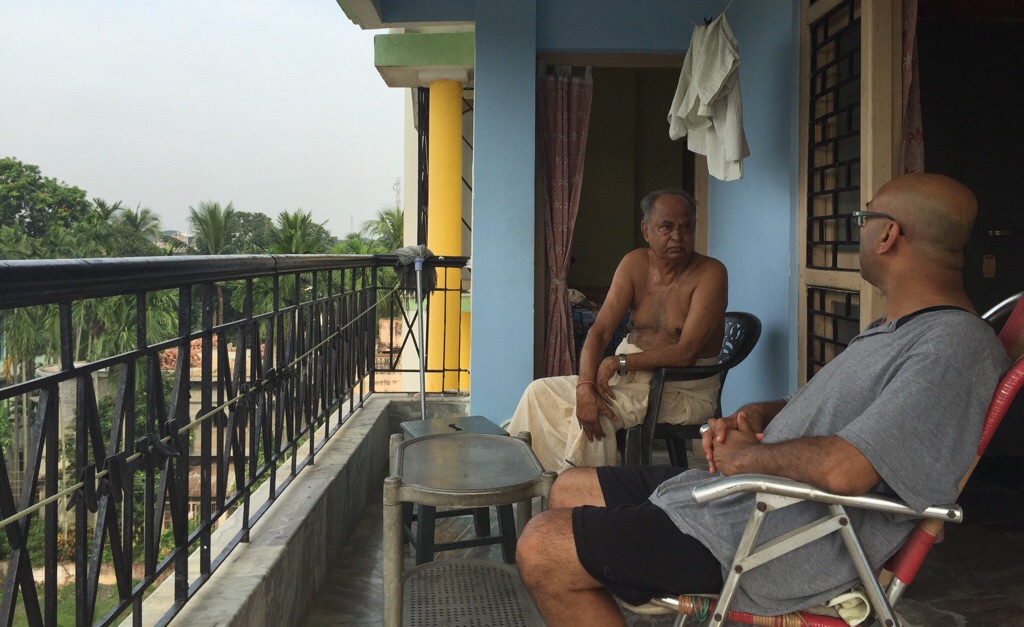