Bose Kakima!!! That brought back a lot of memories.

My best friend during middle and high school days was Avijit Bose. We have always kept up with each other and although geographically we kept getting separated – till we could not be separated any further – he is in Australia and I in US – we could not get ourselves even in the same hemisphere latitudinally or longitudinally – he is still the friend that I talk to most.

We became best friends primarily because we were nothing like each other. He was a funny, street smart person, I was socially awkward and frequently did not know how to end a joke. He was athletic. I was anything but. He wasn’t the biggest fan of math but loved biology and veered towards the medical line. I loved math and therefore never understood a subject like biology where apparently division means multiplication and consequently went the engineering route.

But we spent a lot of time together. And in each other’s house. My parents were particularly fond of Avijit. As was his parents of me. I was always a special guest at his house. Which left me in the precarious position of having to balance their trust in me and also supporting my best friend in all his mischievous misadventures that his parents would surely frown upon if they got to know of them. And that was the other difference between us – he was the mischievous one and I was the goody goody boy then!! (Not any more 🙂 )

I have a lot of memories that go back to those days about his mom and dad. His dad let me accompany him on the stage at a flute concert once (he was an accomplished flutist). His mom would make special snacks for me. She would even bribe me to see if I would spill the beans of any girls in his life. I would feign total innocence. It worked well with the goody goody boy image 🙂

His mom once took me to visit her sisters and her brother about 150 km away from where we lived. I continued to keep in touch with those relatives of Avijit for many years after that. Even when we were geographically separated, I used to write letters religiously to both him and his mom.

Over the years though it became more and more infrequent to see her. I would get updates but would see her less so. The wake up call came for me when, a few months back, I heard about Avijit’s dad passing away. You have no idea how much I have kicked myself for not getting to see him once before he died or even for that matter, simply calling him up. He would always encourage me to study hard and thanked me for being a good influence on his son (I never claimed it, but he thought so).

Anyways, I had told Avijit this year that I will be going to see his mom. And there I was today – after fighting the terrible crowd of Kolkata suburbs for two and a half hours just to navigate about 40 miles. She was certainly frail of health. She recently had a nasty fall and her locomotion is severely compromised. Add to that a host of other physical ailments. But you have to give it to her in terms of mental courage and strength. She refuses to accept help – does everything herself as much as she can and I never saw once losing that beautiful smile I remember her for.

It was bliss to sit with her and just be that middle school boy again! I have to go back and spend more time with her again soon!!! 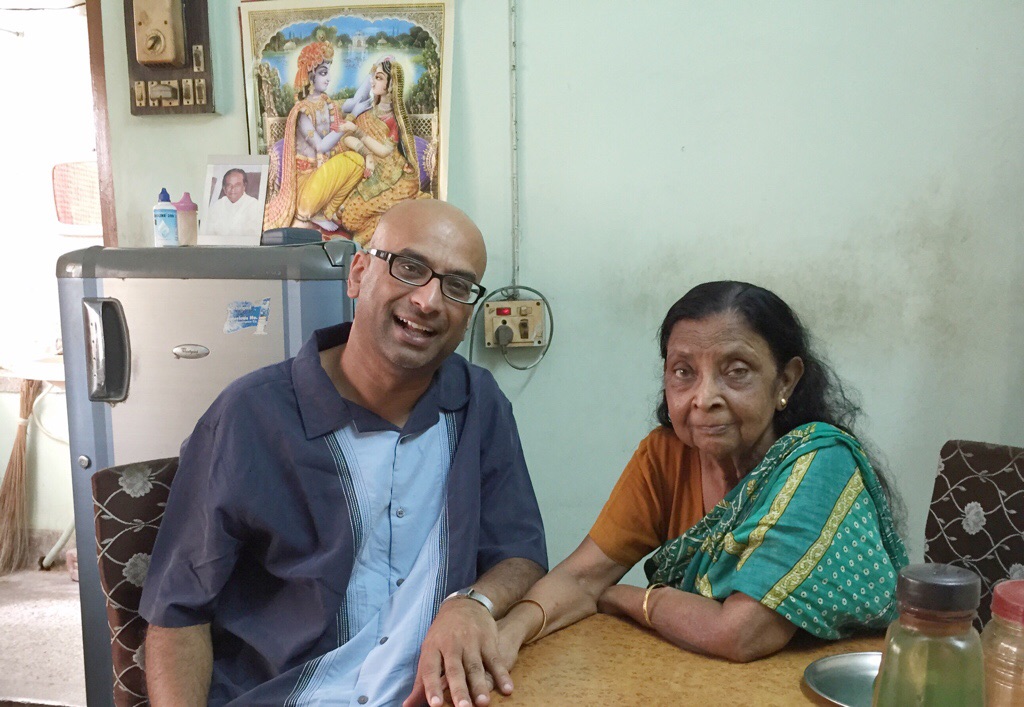