Surely, you can’t blame me after this…

“Papa Roy! We have heard about your blog and Facebook posts!!” – that was how I was greeted by Natasha’s friends as I entered her dorm to pick her up and fly back to Atlanta after a five week summer course in NorthWestern School outside Chicago. I was, of course, taken a little aback. But soon I figured out that in my absence, Natasha had pretty much had her friends think of me as nothing if not a profuse blogger/Facebook poster. Even her instructors mentioned that they had heard about my Facebook posts. I mildly protested at times. The teachers were a little more generous. “We think your daughter got her flair for writing from you. We hope she will pursue her dream of studying Journalism. How do you come up with your topics?”. I explained that I actually do not write any stories or abstract articles. I just write down what happens to me in my daily life. And that since I travel a lot I get a chance to meet a lot of people and write about them.

By the way, I also found out that Natasha had warned her friends severely that they were bound to get Facebook friend requests from me and they were to accept them only at the pain of death!

In any case, soon lunch time rolled in and many of the parents and students went to the school cafeteria to have lunch. I went there with Natasha and her room mate and as we settled down at the table, Natasha said “Wait, Dad! I want to introduce you to Nika”. Turns out Nayanika – commonly referred to as Nika – had become big friends of Natasha and her room mate and that she wanted to meet me. In a few minutes she came in with somebody who I could only surmise to be Nika and her dad. All of us sat down for lunch. The girls being girls and this being their last day, they would often jump up from their table and go excitedly chat with some other friends.

During one such episode, Nika’s dad and I were left by ourselves at the table. We started talking to each other and soon the following conversation happened…

Me: “I understand you folks are leaving for India tomorrow?”
He: “Yes, we are going to visit my parents in Chandigarh and in laws in Delhi”.
Me: “You grew up in Chandigarh?”
He: “Not really – I spent most of my childhood years in Kolkata”.
Me: “Where in Kolkata?”
He: “A small suburb called Chandannagore”.
Me: “I see. And what was your dad doing in Chandannagore?”
He: “He worked in a jute mill”.
Me: “Really? Which one?”
He: “Do you know that area? It was called Anglo Indian Jute Mill”.
I did some quick mental math in my mind and asked “Was Mr. Saxena the general manager then?”.
You could see the surprise in his face.
He: “How do you know him?”
I was sure I was on to something. I asked “Did you know his son Navin?”
He – very very surprised – “They were our next door neighbor”.
Me: “Well, Navin and I went to junior and senior years in high school together!!!!”
He: “In Narendrapur?”
Me: “In Narendrapur!”
He: “I have played many an evening with him and his brother!!”.
Me: “Guess what? In 1985, I have been to his house. The first time I ever entered a swimming pool or saw a tennis ground was in your club!! For all you know I have seen you before”.
He: “Are you in touch with him?”
Me: “Sure! I had dinner with him and his family in Portland a few months back”.

Meanwhile, the kids were back and they were desperately trying to compute that these two gentlemen, as unlikely as it seemed might actually have seen each other in 1985 and now in 2015 have been brought together again thru fate and their daughters!! Natasha, of course had the usual “See? What did I tell you? This is what he does!”.

Since that is what I do, I thought it might be worth doing some more. Now that I had figured out some connection with Gaurav (Nika’s dad), I tried on her mom’s side.

Me: “Where is your wife from? Did she grow up in Delhi?”
He: “Actually, she grew up in a place not too far from Kolkata. It is a steel town called Durgapur”.
Me: “Get out of here”
He: “Why? You know somebody there too?”
Me: “My family is from there. I grew up there. What is her name?”
He: “Anu. Her full name is Anupama. Anupama Sharon”
It was my turn to drop the jaw! I looked at Nika and could only exclaim “You are Anupama’s daughter?”
You could see the excitement in her eyes “Yes. Do you know her too?”
Me: “Everybody knows your mom in Durgapur. She was a very talented girl in our age group”.
I turned to Gaurav and said “ Anupama was a couple of years younger to me. But do mention my name to her brother Amit. We all went to the same school till tenth grade. Your wife and my wife grow up literally a stone’s throw away from each other!!”

By this time, we were all shaking our heads in disbelief!
Natasha’s only comment was “This is unreal”.
And her roommate – who is a Korean from California had the best question ever – “India is not that small, right?”.
We all laughed out aloud.

How unreal is this really? A girl I knew from my hometown that I stayed till 1983 got married to somebody next door to my very close friend in a residential school from 1983-1985 (and very possibly we have been seen each other) and had a daughter who happened to be my daughter’s dorm mate for five weeks in a place just about half a world and over a quarter decade away? And all that tapestry was unraveled over a lunch table only because one of those daughters wanted to introduce her dad to her friend!!

That is absolutely as unreal as it gets. Even by my standards!!!

After all this, if any one of you dare complain that I blog or Facebook too much, you have another thing coming 🙂 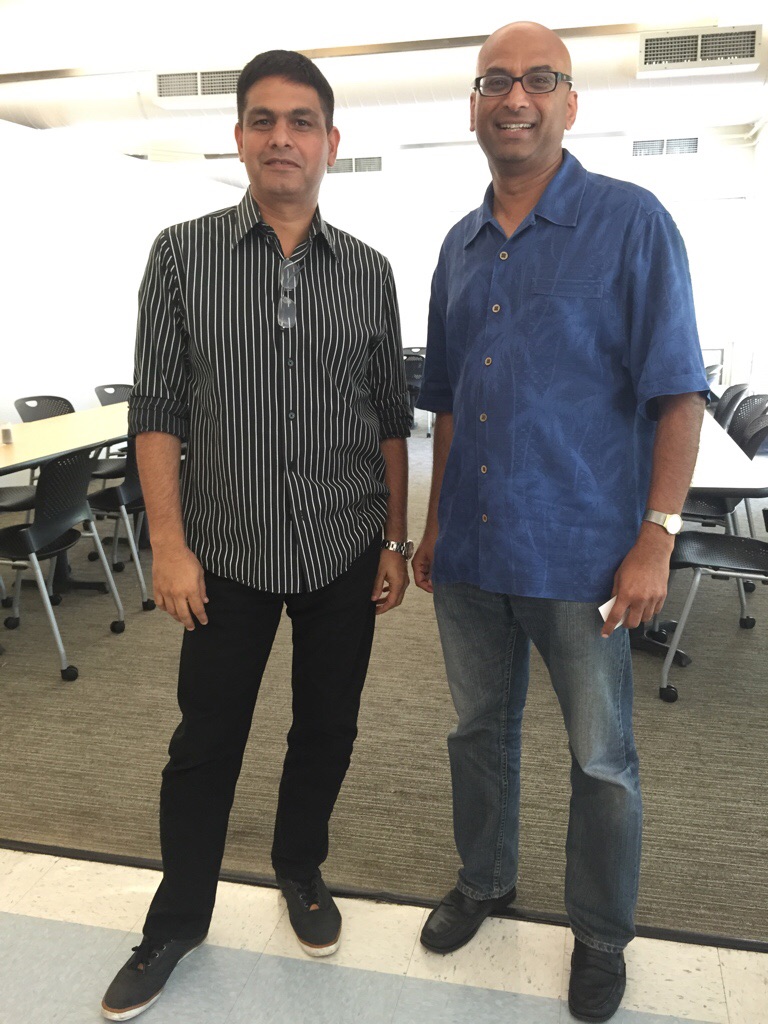