This has been a tough week for my and my team mates at work. I personally have been bouncing off from airport to airport, city to city, meetings to meetings. Yet, among those strenuous times, I always seem to bump into some memorable moments.

I was in Houston for a quick meeting. I needed to get myself to the northwest as soon as possible. So, as you can imagine, it was not very amusing for me when United let me know that my flight was delayed over three hours. I would reach Portland around three in the morning – six o’clock for me by Atlanta time. I would be in no shape to have any meaningful discussions. Long story short, I changed my plans to head out to Salt Lake City, sleep there for a few hours and then head out to Portland.

Meanwhile in Houston, that meant I had a little time in hand. I knew exactly where to go. You see, I was aware that my friend from elementary school – first grade to fourth grade – who is a renowned doctor in London (yeah yeah yeah, you have a legitimate question – “all your friends seem to have made something about themselves, what happened to you Rajib?”, can we move on, now? ) also is deep into Bengali cultural stuff and was in Houston for the North American Bengali something (it is called NABC) to perform in a drama. She is one of those from my class who was always blessed with multiple talents. This, by the way, is an event where all the Bengalis from all over North America swoop down for a couple of days. To be able to get any stage time, you have to be top notch. To come all the way from London to perform, you have to be really passionate. And she is both.

A couple of wrong addresses later, I found myself sitting at a lobby of a hotel near the airport. Eventually Mausumi (I just realized, I had never mentioned her name) showed up too. Beautiful and graceful as ever, she picked up our conversations from almost where we had left it last. Presently, her husband and son (I have met them before) showed up too. It was such a great fortune for me to see the Basu family again.

At some point, she mentioned that they have another couple traveling with them. I am always up for making new friends. So, I mentioned I would love to meet them. Eventually, a lovely couple strolled in. And Mausumi introduced me to the gentleman as “Ani” and his wife who has the same name as my friend. As socially awkward as I am, I first started talking to the lady thinking she was Masumi’s friend’s daughter 🙁 We exchanged pleasantries. But I was distracted. My mind was racing – “He is from Birmingham – the UK version, not the Alabama version – and his name is Ani. How do I know him?”. Then he took his hat off. And I blurted out “Aniruddha-da na?” (are you not Aniruddha?).

As difficult as it might be for you to believe, this guy and I went in the same bus to middle and part of high school together. In fact, he got up in the bus from the stop right after my stop. He was one year senior to me but I remember every detail of him – including one day the bus going in front of his house like every other day but he was just standing at the gate of his house. He had just recovered from some ailment (was it jaundice???) and he was still not cleared to go to school.

As coincidences go, after he had left that home, my parents move to a home literally two houses beyond his and lived there for seventeen years!! Last I saw him was in 1982. And today he was the “a friend of ours I would like you to meet”, as Mausumi put it.

What is the chance I get to see my elementary school friend and my senior and bus-mate from middle school – all in India – at the same time? Far from their country, UK!! In a country called USA about which we had pretty much zero knowledge when we got to know each other first?

You can only imagine how many old friends we caught up on!!! All this happened in 40 minutes. I had to get to the airport soon. What a memorable 40 minutes!! Sometimes I wonder why can’t these moments be hours and hours. And then I remind myself that my other alternate was to have 0 minutes. I am good.

Here I am – at Salt Lake City airport, near midnight local time, waiting for my hotel shuttle to show up. But I have all the time in the world now!!! 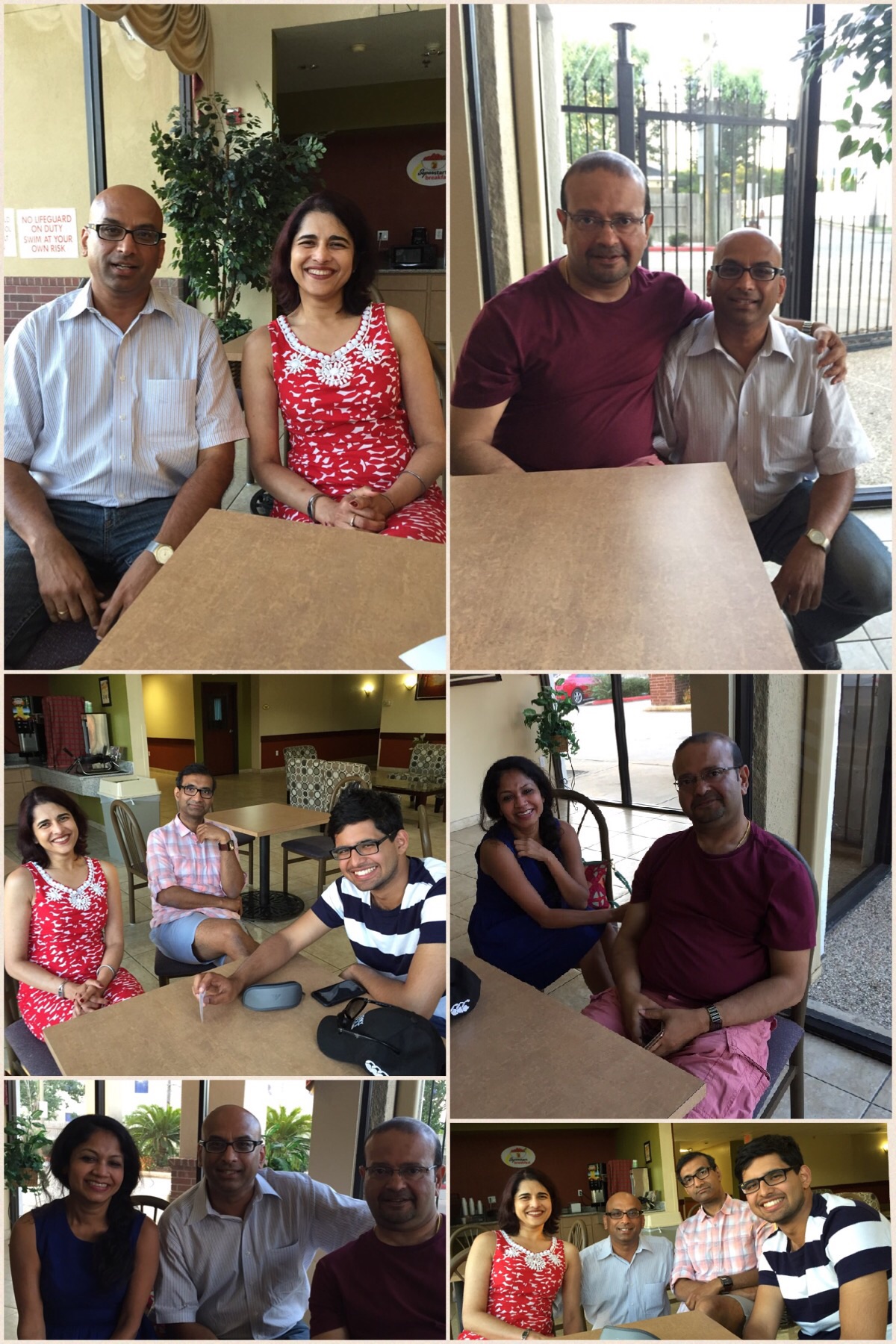