My good deed of the day…

I know this looks like an Italian painting (except for the modern lady handbags, perhaps) but it is a real photo taken with my phone. The backdrop of the story goes in the following way:

Natasha, who goes and stays in a dorm and takes classes in different colleges every summer often makes friends from very different cities and countries every year. Being a person who values people and relationships with people over just about anything else in this finite time on this beautiful earth that we have fashionably named “life”, I am always a little bothered when she does not keep in touch with many of those friends after summer.

Conversely, you can only guess my excitement when she declared that she was going to meet a friend that she had not seen after one of those summers – I forget whether it was Duke or Brown – when we visit New York. Karina (called “Karina with a K”) was going to visit her wherever we stayed. Except the whole plan fell thru at the last moment due to her dad’s office travel plans.

I was not feeling too good about leaving Sharmila and Nikita to visit Time Square by themselves but I did tell Natasha that I will take her to wherever her friend lived. Which, as it turned out was a two hour hike with three trains involved in between. But, it was okay with me – as long as she realized that life is all about the human relationships. Everything else is too materiliastic to be worried about.

The train finally pulled into the Ridgewood station. And we arrived at the agreed upon meeting point. As soon as we started coming out of the tunnel, she spotted her friend at the top of the flight of steps. They ran as fast as they could towards each other and hugged each other hard.

Separated by a year in age, brought up thousands of miles away, they came together for a few weeks a few years back and then this afternoon, there was the moment where they saw each other again!!! The tunnel lighting was not good. But that is the best picture I could get of that powerful moment of strength of human relationships.

And here I am waiting at a nearby bar, biding my three hours as they catch up with themselves… 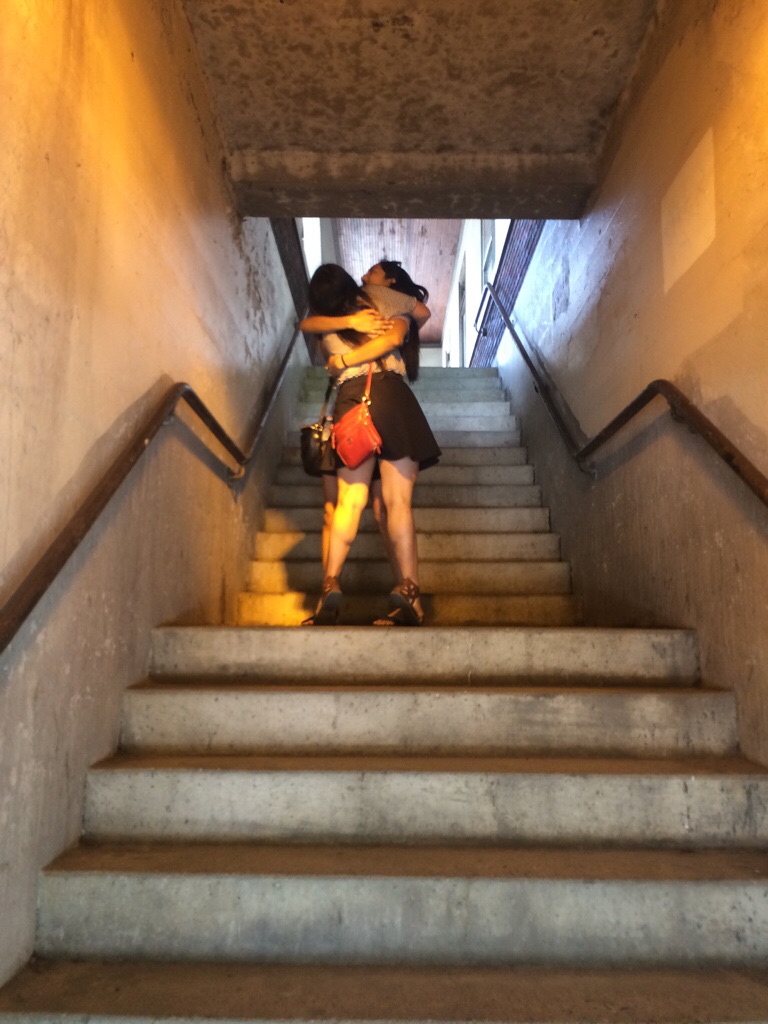