The continuing saga of my mom’s birthday

If you recollect a blog post from a couple of weeks back, you might remember that after some frantically running around “Beeshey Josthhi”, my mom finally settled that I should call her to wish her on her official birthday and not her real birthday (Jun 3). A few days later, when I was in India visiting my parents, my niece (who lives downstairs from my parents) had expressed great curiosity to understand why there were two different calendars. I took her thru how there are actually many different calendars and how they all originated.

Not sure what she got out of that lecture on “Calendars 101” session, but it now appears, she had decided that she was going to celebrate her grandma’s birthday on June 3. Now, in most households, this would be a very simple thing. Not in mine!!

First and foremost, my niece got my sister to buy a new saree for my mom. (which is what she is wearing in the picture). When my mom eventually realized this, it led to her berating my dad about why they should have bought a new dress for my niece. Totally confused, my father went – “But this is your birthday”. My mom’s reaction? “Taito. Ami pujor saathey guliey felchhi”. Meaning “Of course! I am confusing this with Pujo” (which is a festival around October timeframe when it is customary to exchange gifts of new clothes with your family members). Did I mention that this is the first time ever my mom has been confronted with the prospect of having to celebrate her own birthday? 🙂

Second, my mom had serious logistics worries. When I called her u, after initially gushing about how my niece had said she was going to get a cake for her, she abruptly stopped. “Ki holo” (what happened?) I asked her. Once she explained what was bothering her, I could not help laughing out loud. I literally had to mute my phone. In Bengali she asked me if she could request me to ask my niece not to put any candle on the cake. Frankly, I was a little curious. My first thought was that maybe she thought there are animal products in wax or something. But no! Her worry was that my niece was going to waste a lot of money buying 71 candles!! And that to accommodate so many candles she was going to waste more of her parents’ money buying a very big cake. After I unmuted my phone, I told her “Aajkaal chhoto chhoto mombaati paoa jay” (these days, you can get very small candles). She seemed to have been pacified.

Next day when I called her (obviously after all the celebrations), she was absolutely excited about candles. As you can see in the picture, my niece simply got two candles – one shaped like “7″ and another shaped like “1″. Now this was a concept that completely escaped my mom till she saw it. When she saw it, she was totally taken in by humankind’s power of innovation. She spent five minutes trying to explain to me over the phone that she was talking about two candles only – apparently worried that I might not be able to understand the concept with my little brain. “Kintu kirokom kayeda korechhe jaanis?”. I, of course, played along. At some point of time, I was going to mention to her that we have actually sent people to the moon and brought them back – maybe this is not half as exciting. But it was her birthday. Surely, you understand.

The previous day, when my niece let me know everything was all set, I called up my brother and told him the whole story. His own family was visiting his inlaws – so I proposed that he go over to my dad’s place and add to the confusion. Which he promptly did. Took a train and in about couple of hours was at my parents’ place. That way, he is just like me. Needs the flimsiest of excuses to go do something crazy.

The next day (actual birthday), when my dad woke up, you can only imagine his confusion. His younger son was there unexpectedly, there was a cake on the table and some general chaos was reigning supreme. Eventually, he got the hang of it. And in a proof that he is starting to get a little better, he got excited enough to he get up from his bed, put a shirt on and sat down on the sofa declaring he had to witness the first ever birthday celebrations of mom. Judging my his face, he seems to have made a lot of progress from a week back when I saw him last.

Just about when I was starting to conclude the phone call once my mom was satisfied that I had internalized the concept of how to get “71” with only two candles, she started explaining another birthday concept she was afraid I might be clueless about. From the picture you can see that my niece had not spared her grandmom from smearing her face with some cake. And that is what my mom then launched on to explain to me. “Khetey-o hobey, abaar maakhtey-o hobey”, she explained. (You have eat some and then smear some!!). I was like – “Really? Next time I leave food on the plate and you yell at me, we will talk.” In reality, I wished her again and then let her know that I needed to get back to work. Somewhere, inside I was starting to worry that she might start on the general concept of balloons and how they are an integral part of birthday celebrations.

I wanted to keep that for today’s call 🙂 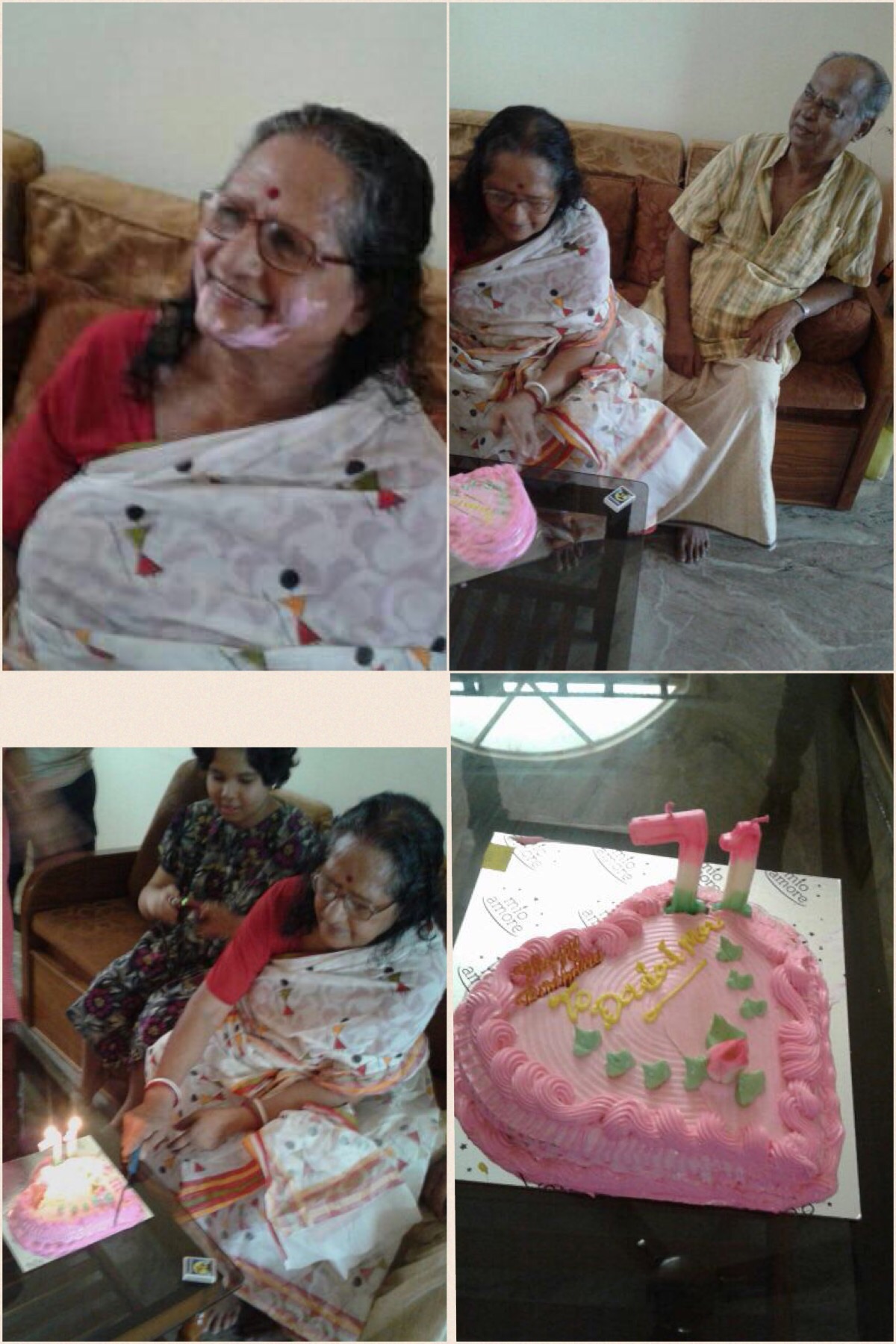 Posted June 4, 2015 by Rajib Roy in category "Family in India