That was a big miss on my side!!

No trip to Durgapur, however short it might be, is ever complete without saying Hi to my long time friend Baisakhi and her family. In the whirlwind trip to Durgapur this time which was mostly to visit four sets of folks in seven waking up hours, I was able to squeeze in about half an hour or so to check on her family. I did show up very early at her house – dragging her husband out of his peaceful slumber on a Sunday morning 🙂

Like every time, quite some time was spent with her son Kintu. We talked about his latest toys – he is a fanatic when it comes to cars and just about any vehicles. He gave me a demo of a car pound as you can see in the picture. The chat with Baisakhi and Sagar was the usual. Mostly about work, family, friends and the terrible heat wave in India.

Long after I had left their home – as we were speeding down Durgapur Highway to Kolkata, I received a Whatsapp message from Baisakhi’s phone. It was actually from her son – you can see the message in the picture.

I don’t recollect exactly when but when he was very young, during my trips to Baisakhi’s house, I used to teach him new, silly stuff – you know like fist bumping, high fiving and such. Somewhere, it became a tradition for us – we would high five each other during every visit of mine. There was nothing particular to celebrate really – just high fiving for high fiving’s sake.

And this time, it completely slipped my mind 🙁 The message from him says “Rajib uncle, I forgot to high five you this time”!

I was absolutely thrilled to get the message. I realized how important that small gesture is to him. Someday, when he becomes as old as I, he will probably remember me as the “high five uncle” 🙂 But I also felt terribly guilty that as an adult I failed him on remembering our tradition. That was my job – not his 🙁

I will have to re-visit him soon… 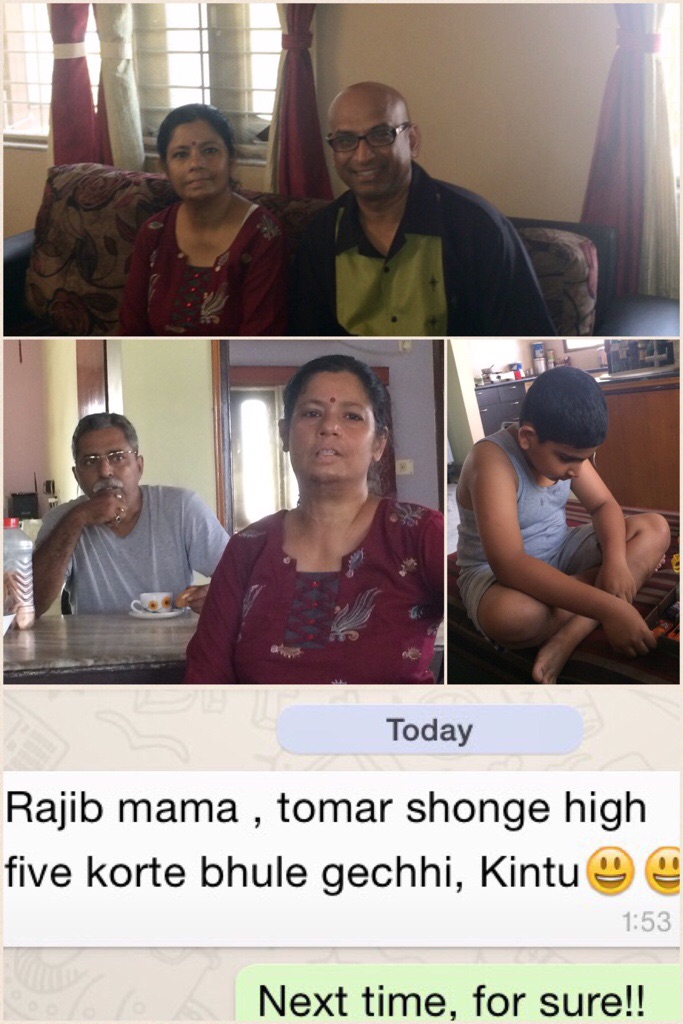 Posted May 24, 2015 by Rajib Roy in category "Intersection Points", "Vacations