There are always two sides of a coin

Seeing that my dad is certainly getting better, albeit with very small steps, night before last, I planned to visit some of the other folks I had planned to and create some new intersection points. First in priority was to check on my friend Suparna’s mom.

This year, like every year, when I called up Suparna in London to wish her a very happy birthday, I got to know about her mom being down with Alzheimer’s and that her condition was deteriorating rapidly. I had promised myself to visit her when I would be in India next.

But I did not know about her current whereabouts. For a few hours I was getting a little worried since none of my calls to Suparna’s mobile were being answered. She is a very renowned doctor in London and is very difficult to contact her during office hours. Took a chance and called her home and found her son there. Then the trick was to gain his confidence enough to give me his grandparent’s address! I took another chance and reminded him how he and I along with his mom and her brother had taken a boat ride once in Miami when he and his mom had visited US to attend his uncle’s graduation. He was too small to remember, I figured. But lo and behold! His demeanor on the other side of the phone completely changed! “You are THAT uncle?” he asked and rattled off all the details I was looking for to trace his grandparents!!

Armed with that, my brother and I hit the road last morning headed towards a very small place that I had never been to – Dankuni! And between us and the ever-complaining car of his, we eventually reached there.

Seeing how frail Suparna’s mom had become was another reminder how little we actually get to control in our life. She certainly has all the challenges of an advanced Alzheimer’s patient. And more. I sat down next to her for quite some time and gently asked her questions. She nodded at times and haltingly gave one word answers at times. But most of the times she just kept quiet. Uncle explained to me how she has lost all ability to do even the basic bodily functions or even tell simple things like she is feeling hungry.

As uncle left me with auntie and went to the other room to chat with my brother, I sat there quietly – my mind floating back to better days. She was one of my favorite ladies growing up. She was very kind and gentle to me. There was this time when three of my friends – Avijit, Shukla, Debasish and I had landed up at her place and were quibbling over something. Seeing that the other four had rallied up against me in the debate, Suparna’s mom had sided with me in that argument. Her reasoning was “Tora soba-i miley or against-e keno?” (‘Why have all of you piled up against him’?). Incidentally, we won that argument and I don’t think Suparna likes acknowledging the bet she lost 🙂

It was very hard for me to accept the changes time had wrought on her. How I wished I had not waited for nearly twenty five years to see her again. I found out that she had even visited US in the meanwhile once. I completely missed her.

If that was the lesson in life I thought I had to learn, I was in for another surprise. In a classic case of a yin always having a yang, I got great inspiration from uncle in the the next hour that was spent with him. I came out to the room that uncle and my brother was sitting in and started asking about his own health. My jaw dropped once I pieced together the whole story.

Here I was looking at the havoc time had wrought on auntie’s health and the next moment, I was looking at somebody who has steadfastly refused to be cowed down by time! What you see in the picture is an eighty year old gentleman. In the Indian context, most would reckon him to look ten to fifteen years younger. Fit as a fiddle, he showed no signs of age. He climbed up and down the stairs as fast as we could. While he has a help for a few hours in the day, he pretty much takes care of his wife by himself.

Amidst all this, what was absolutely startling was his attitude. He smiled the whole time I was there. Not even once did I hear him complain about anything. Even while talking about his wife, he seemed to have an amazing ability to accept inevitable facts of life. Unlike most folks over here with whom any discussion quickly becomes a complaints-fest of the rotten state of politics or terrible state of medical and hospital services and so on, he seemed to always accentuate on the positive. And when he talked about unfortunate stuff, he just stuck to stating the facts without complaining or being judgmental.

I was so inspired that as I got into the car back, I blurted out “When I grow up to be as young as you, I want to be just like you”.

“No. I know you. You will be better”, he said firmly, as he closed the car door for me. 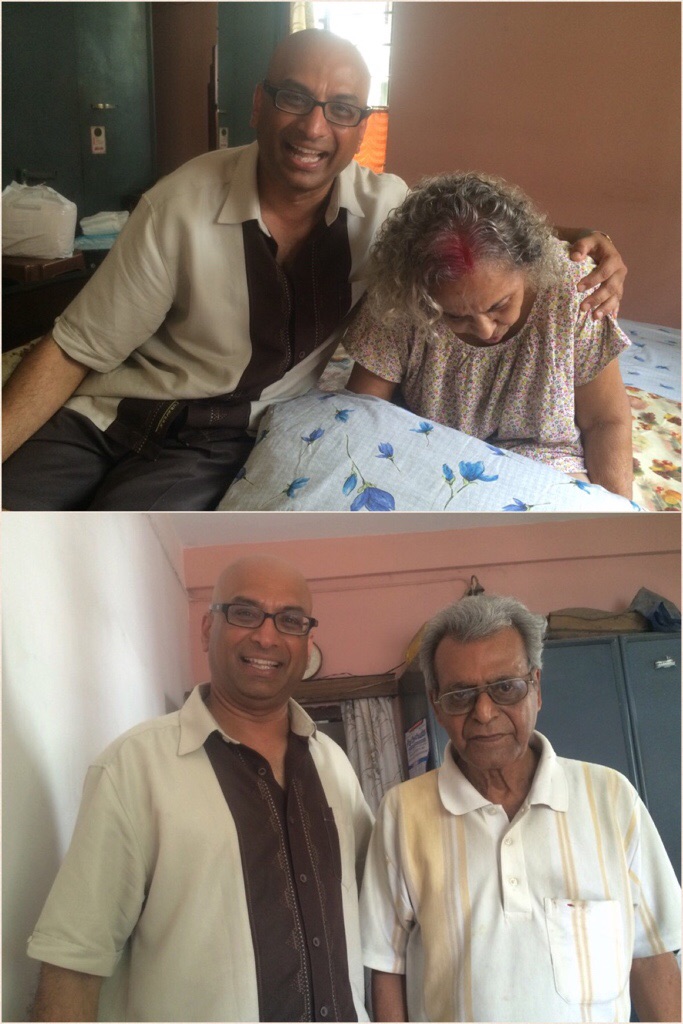 Posted May 22, 2015 by Rajib Roy in category "Intersection Points", "Vacations