Thanks to my good old friend Mary Banks, I tried a new way of running today. No, this is not about how to run and get a visit from the ambulance. It is actually about running and walking. She suggested that I try out 3 minute run and 1 minute walk all throughout the run. She also suggested that I would be surprised by the average pace.

Which is exactly what happened. If you look at the graph (blue line) you can see the 3 minute runs (the troughs) and the 1 minute walks (the peaks). I would have guessed that I would average out around 12 minute mile given the heat and direct sunlight. Instead, it came to a pretty quick (for me) 10 min 15 seconds.

Couple of things I noticed – my runs were faster than expected since I was catching up with my breath during walks. And the walks had become faster than I would expect because I was already energized by the run. Finally, the muscles felt much better at the end since the wear and tear was distributed because of varying of the speed.

You will notice in the red line (time) that there were three temporary stops (vertical segments). The first one near 4 mile marker was a water break. The third one right after the 10 mile marker was waiting to cross a road. The second one around the 7 mile marker? That was to give the right of the way to a three feet King snake crossing the trail!!! 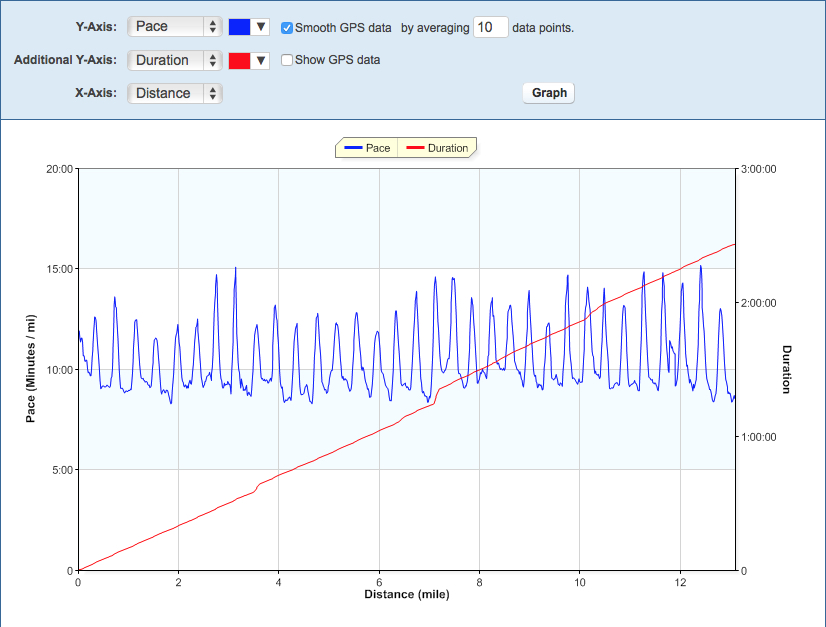