On this road called life that we are all destined to walk along and cross paths with, we often come across very simple people whose journey on this road absolute inspires us and exalts us to strive to make every bit of that journey as rewarding as is possible. Today was such a day for me.

Second work day of the week. Second city to visit. At the end of all meetings, my friend from work Mark and I took refuge at Miller’s Brewhouse at Milwaukee airport to catch up on emails and phone calls before we called it a day – or in my case, catch a flight back home. With all that back to back emails and phone calls, I had not paid much attention to the young lady Chelsey who was serving us. After I was done with my calls and work, I put my phone down. But Mark was still working. So, I turned around to Chelsey who was nearby and asked her “Tell me your life story”.

Initially she was reluctant insisting it was a little sad. I assured her that I genuinely wanted to listen. And the story that unfolded was an incredible one. I learnt that Chelsey is from Tennessee where she was happily married and soon had a baby – the love of her life. Between her husband and her, they took shifts in work to look after the baby at home. And one day, when she came home, she came home to worst fear any mother in this whole world could ever come to. Her one month old child had died of SIDS. (The child was on his belly and suffocated himself). A little time later, her husband and she grew apart and eventually separated. She was just a couple of years over twenty!!!

Unlike many other weaker earthling – especially at that age – who might turn to other means to escape reality including illegal ones, she resolutely resolved to make something out of herself. She left Tennessee and came to Milwaukee for a “clean start” and follow her dreams to be a vet. She works today not in one job… two jobs…. but three jobs as she takes herself thru a vet school at the same time!!! She is determined to come out with flying colors on the other side.

As I took her permission to feature her in my blog, I asked her if she would take a picture with me. She not only did that but gave me a picture of the locket she was wearing. (See the inset) That is a locket she never separates from. No mother every would. It contains the ashes of her child.

What an inspiring story. How many times a simple thing at home has not worked and we have had bitter reactions? How many times we have been critical of that one well paying job we have – let alone three minimum wage jobs. Amidst all this, how many of us keep telling ourselves – No matter what, I am coming out of this on the other end, way ahead of others? And with a brilliant smile to boot?

If anyone of you ever happen to be in Milwaukee airport, just stroll over to the Miller Brewhouse on the upper floor and ask for Chelsey. And wish her the best of luck. The world has to belong to hard workers like her who is never down on life! 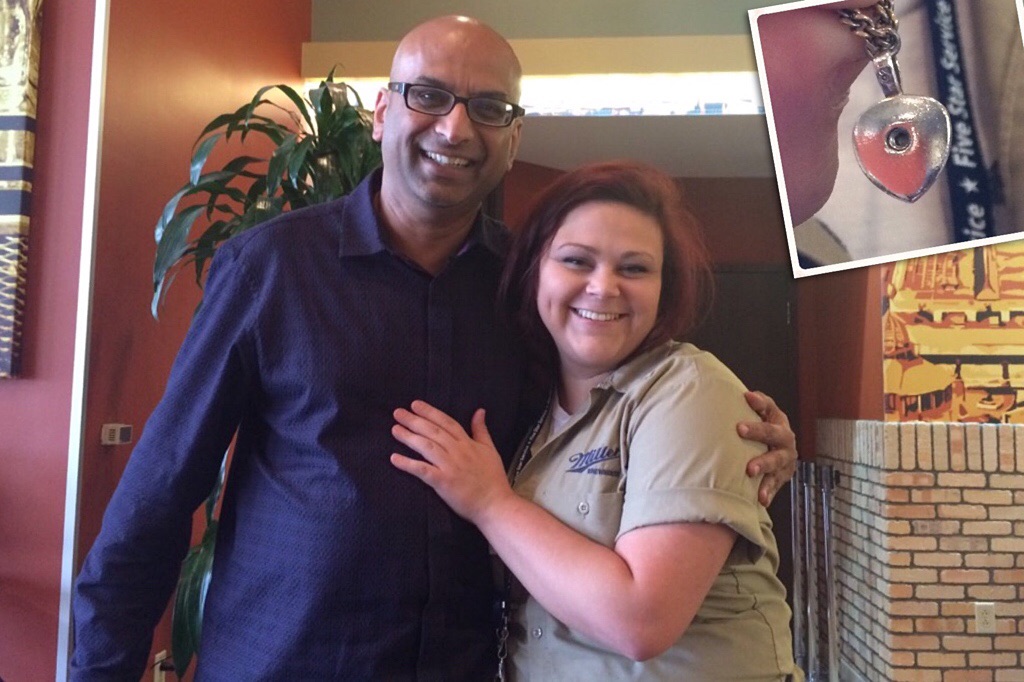