A stranger no more!!

Last weekend Sharmila’s friend Rupa had visited us from Dubai. On Sunday, I was dropping her at the airport and on the way we started talking about the concept of friendship – you know FB friends, school friends, work friends etc. At some point she talked about somebody called Sudeshna Das who now lives in Houston and that she was a friend of Rupa’s sister. The thought that went thru my mind immediately was that she must be then my sister’s friend (same batch). Anyways, after dropping Rupa at the airport, I made a couple of calls to friends in Houston to see if we could track down Sudeshna. As luck would have it, I was going to be in Houston within a couple of days for work.

As you can imagine, a little help from FB, friends and a few phone calls and I did get to meet a complete stranger – Sudeshna (frequently called Mou). Our common friend Subrata, his wife, Sharmistha and Sudeshna had dinner with me. We absolutely missed Tapan Das – Sudeshna’s husband who had to leave for Brazil that day.

The dinner started, innocuously enough, with two complete strangers meeting. By the time the evening was over, we found more intersections points than we could shake a stick at. I probably cannot remember all of them now but to cite a few – we already knew that she and my sister were classmates. Found out that her cousin – who has been very very close to her all her life – is a very close friend of my wife Sharmila. I knew Sharmila visited this particular lady every time we went to India – I just did not know the connection with Sudeshna at all. Then we found out Sudeshna married Tapan – who is a friend from college days of none other than Samaresh who I run with every Sunday morning here in Atlanta. Did I mention that Samaresh and I lived a stone’s throw away during our middle and high school days in India?

The conversation invariably went to our parents and their health. A little later when Sudeshna told me that her parents used to live in City Center ( an area in Durgapur), I became even more inquisitive. I asked her if she remembered any more details. She mentioned that she thought it was on Michael Faraday Road. I was like “Get out of here. Which house?”. She thought #20, but she was not sure. This was way too much coincidence. So, I asked her if she could call her mom in India. Which she did. And I took the phone away from her, introduced myself to her mom and asked her what was her exact house number when she lived in City Center. She confirmed that it was indeed 20. I asked her if she knew her next door neighbor. “Mamata Ghosh?”, she asked. “Absolutely”, I replied – “they are my inlaws. And they still live there!”. We were both very excited.

So, I asked her “Where do you live now”? I knew that they had moved to Kolkata since Sudeshna had mentioned this before. I did not know exactly where, though. Well, you are not going to believe this, they have moved right where my brother lives. In fact, you might have seen many pictures of me and my brother running on my blogsite right in front of their house!! As you can imagine, I made a promise to visit her and have tea with her next time when I am in Kolkata – which is a few weeks away. Reminded me of the trip to see Sanghamitra’s mom last time!

The evening started between two absolute strangers but in about an hour and half’s time, we realized that we had this huge network of connections in India and USA that tied us together. It was as if we have always known each other through these years.

We really really missed Tapan. I am sure I would find at least another set of connections. In fact, we never explored Sudeshna’s in-laws’ side at all!

That would be the agenda for the next trip to Houston!!! If Subrata and Sharmistha can deal with the boredom that is 🙂 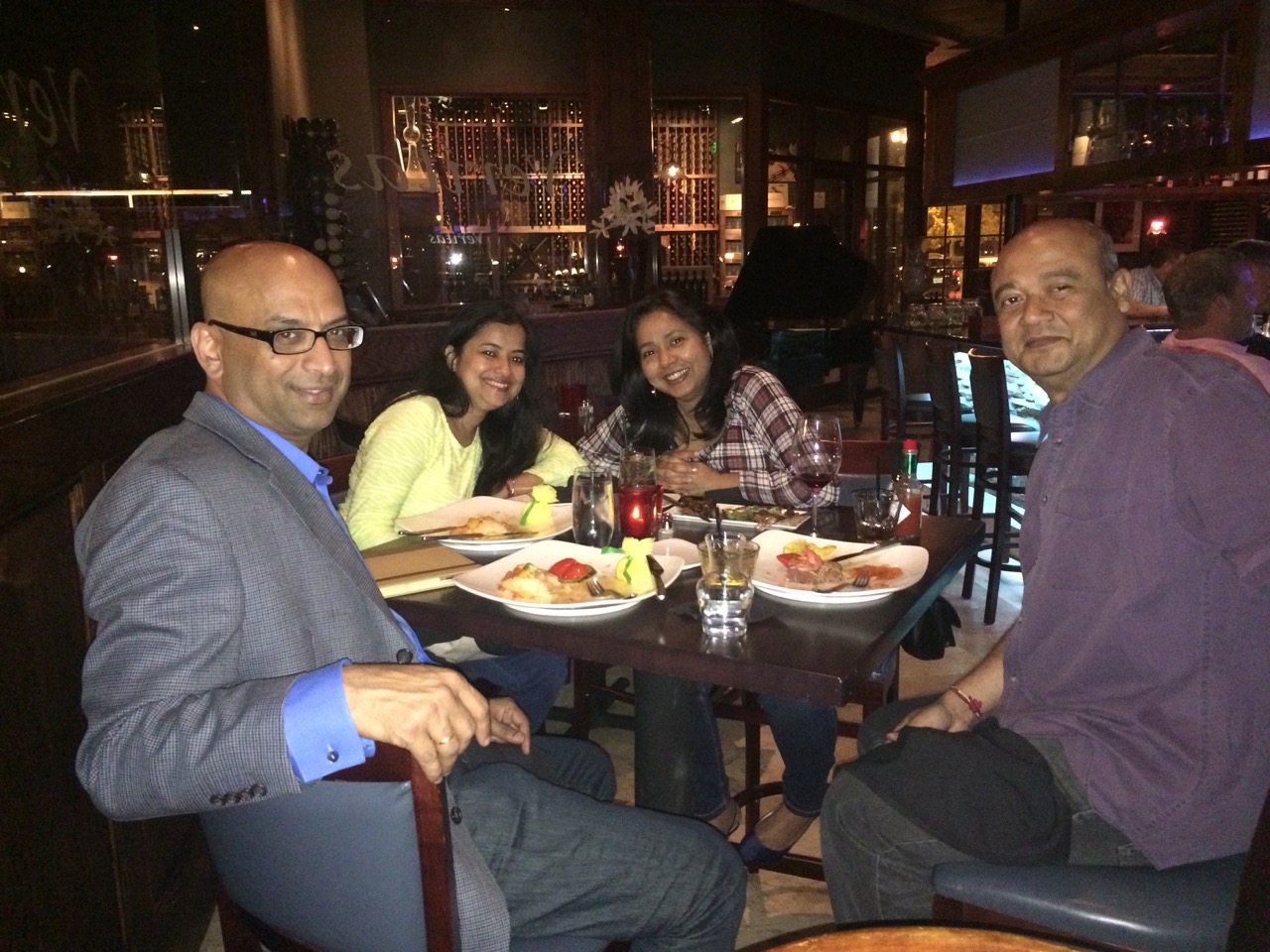