Of blades and bolts!!

“What is it?”, I asked. The ever-smart Mark lifted his eyes from his phone and nonchalantly replied “Oh! It is a blade of a wind turbine” – like he sees them every time he drives out on his street or something. When we see the wind turbines in the field (generating electricity from wind), we don’t get a good idea at all how humongous these blades are.

So, we took bets on guessing the size of the blade. I came at 100 feet. Bob at 150 feet. And Mark at 120 feet. And Mark was right (the standard ones are 120-125 feet tall; that is a twelve story building!). From that we went to think of all sorts of trivia about wind turbines and blades. The one that took us most time to figure out was – how many bolts would they use and what size the bolts are. After a long discussion, we turned to that one version of truth – Google! A few searches later, we found the answers. Nearly 25,000 bolts and some of the bolts are 6 cm in diameter!! We were trying to imagine how they would look. And eventually decided to change the topic. So, we looked outside – just in time to see that we were driving along another truck carrying the connectors with all the bolt patterns!! All we had to do was lift our noses from our iPhone Google searches and just look out!

I had already speeded up to pass the truck. Realizing that we should keep a picture of the bolt pattern, I took the nearest exit and a couple of deft U-turns later, managed to catch up with the truck again. And that is how we got the picture in the bottom!

By the way, at that size of the blade, even at a sedentary speed of three seconds to one rotation would mean that the tip of the blade is moving at the speed of nearly 175 miles per hour (300 kmph)!!! 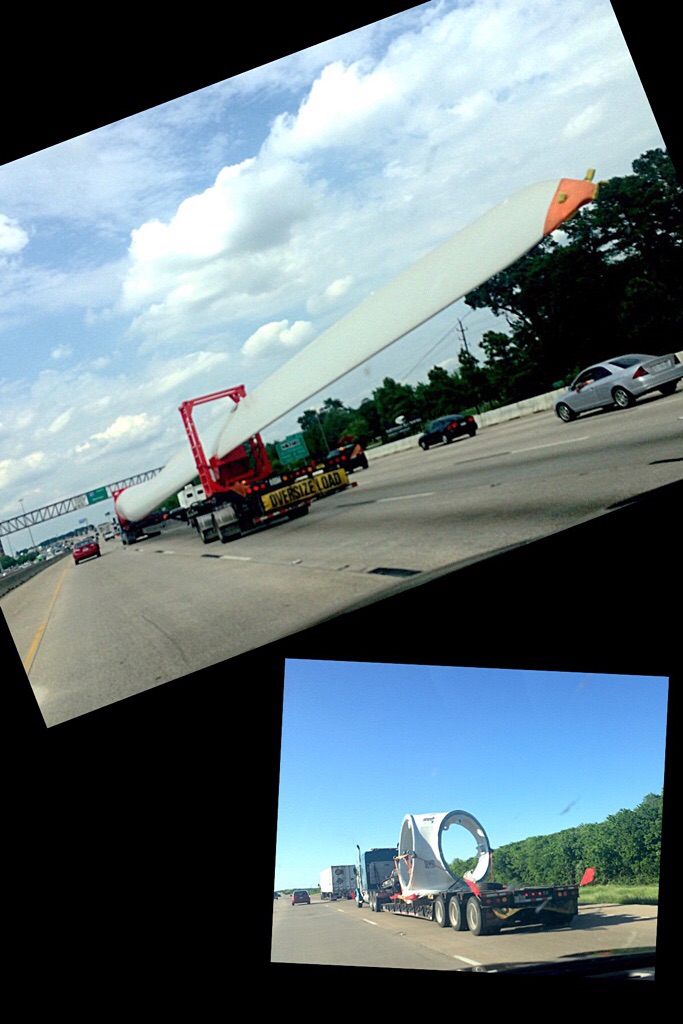