Will I be able to make the adjustment?

It was a long – really long drive from my brother’s house to the old age home where Sanghamitra’s mom stayed. That was Kolkata crowded roads in a terrible form. Honestly, I was a little apprehensive of what a old age home might look like. I had never seen one before. But mostly, my thoughts were around analyzing why are old age homes becoming more common now in India. Even at the turn of the century, fifteen years back, it was not that common, if there were any at all.

Slowly it started dawning on me how the society in India is going thru an evolution many developed countries have gone thru some time back. With the advances in technology, communication and transport, people have moved further away from their parents’ homes for jobs. First, communication has made it possible for people to know of opportunities in other parts of the country. A few decades back, nobody in Bengal would probably know about great opportunities in Bangalore. Second, advances in transportation has made it possible for people to live elsewhere near jobs and yet be in touch with their loved ones in a far more easy fashion. As as the middle class grew in general in India, like every human being, so did the need for independence and privacy.

In the first wave, that broke the concept of joint families. My father is a great example. He moved away from his village a mere 100 km (60 miles) away but that was his ticket to economic independence and freedom. He visited his mom every weekend in the village but it was a joint family no more.

It appears that there is a second wave going on now. In the previous wave, there was still one or two kids who always stayed back in the parents’ home and took care of them. But as communication and transportation continued to advance, kids of the middle class started getting exposed to opportunities much further flung away – totally different states and even different countries. Add to that the fact that people started having less number of kids (a reasonably success Family Planning Programme was launched in India in the seventies) and increasingly families are having both the husband and wife working. What that is resulting in is a wave of parents who have retired but suddenly find themselves without any kids or grandkids near them.

The kids and the grandkids are succeeding by most every benchmark a middle class family can measure with. But the associated casualty has been a further breaking up of the unit called a family. The kids have great intentions but no ability to take care of their parents (remember they are trying to optimize their life around their own kids’ education and their own professions, just like my dad did). Sometimes they are not even in the same country. Meanwhile, day by day, the parents are losing their ability to support themselves.

There is another effect I have noticed. Most of my friends’ parents seemed to have grown some or the other kind of psychiatric issues – depression being the most common of them. But this trip alone, I heard of stories galore of dementia, bipolar disorder and many other such issues. Many of you probably know that both my parents suffer on some of those counts (my mother much more severe than my father). I do not think this set of retirees were ever prepared socially to deal with a life where they do not have much work to keep themselves busy on one hand and on the other hand, have no loved ones around at home.

Those were the thoughts that I was lost in as the car weaved thru increasingly narrower roads. At one point of time after about one and a half hour of drive, we entered a street that literally could not take traffic from both sides. After navigating for about three kilometers in that really narrow street (and me getting more and more worried about how hospitable the old age home location would be), we suddenly came to the gates of “The Peace”.

Once I entered though, it was a completely different scene. It was a lush green property with beautiful flowers all over the place and a few small clean water bodies with seats all around. It was truly a dramatic change. Then I looked at the building. Every balcony had old people sitting outside their rooms staring at me. Suddenly, I became very self conscious. I was wondering whether they were forlorn to see outside people to talk to or were merely wondering what was a funny looking, shaven head guy with a big camera doing in their campus. Or maybe they were just merely enjoying the sun.

Eventually, I found my way to Sanghamitra’s mom’s room. Except she was not there. But soon I found a lady headed my way slowly with the aid of her walker. And that is how I met the lady who I had trekked there for. Over the next hour and a half we talked a lot about her family, her background, my family… the two cardiac arrests she has had, the adjustments she is having to make in her lifestyle – especially around food (she has a lot of restrictions). Without doubt, one of the kindest ladies I have ever met in my life. Given such a large change in lifestyle, she was remarkably jolly and positive in her attitude.

I wish I had a lot more time to just get to know her and her journey in life a little more but it was getting time for me to make the next long trek to the place where all my cousins had gathered and it was also getting past her lunch time. Bid her adieu and slowly walked back wondering “Would I be able to adjust to an old age home ever?”. 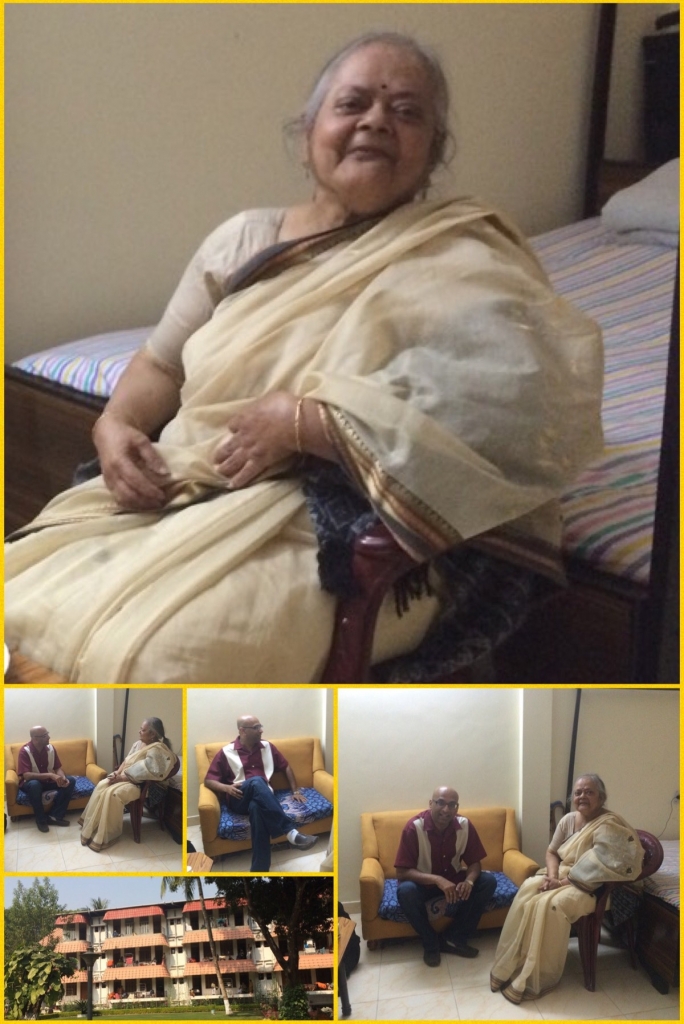