“You see life is not about the destination but the journey. The ultimate destination in life is always death. What is the big hurry reaching there? Let’s slow down and look around and enjoy the journey”, I explained.

I know. That was way too heavy for my ten year old nephew who, fittingly enough, stared at me blankly. (as a Bengali would put it “fyal fyal korey cheye roilo” 🙂 )

You probably recollect from a previous blog that after checking out of Ibiza Merlin resort, instead of heading towards my brother’s place, we decided on the spot to go instead to Kalyani to revisit my parents who were absolutely surprised and delighted. You may also remember that the travel was very tedious. We covered about 60 miles in nearly four hours or so.

As we kept plodding along, my elder nephew was clearly getting impatient (as was my brother, by the way). At some point of time. the nephew had asked enough number of times how long would it take us to reach Kalyani that I was prompted to spout out the philosophical words quoted above.

“What does it even mean?”, he enquired.
“Well, once we reach Kalyani, what are you going to do? Most likely watch TV – right? Will you remember it next year when I come? Or will you remember more if we do something that we normally don’t do?”, I struggled to explain, clearly taken aback by his curiosity to actually understand what I said. (I know, silly nephew 🙂 ).

“Like what?”, he pressed on.
“Oh! I don’t know. Maybe we should look for some odd looking trees and stop to take pictures. Maybe we should stop by a roadside pond and see who can throw a stone farthest into the water. Maybe we should pick up one of those yellow flowers you see and count how many petals are there in a mustard flower. (The answer is four, btw. I had once stopped and counted). Or may be we should just stop and talk to a stranger and make new friends.”.

“Let’s do that”, he said.
Clearly surprised by the persuasive power of my own words and certainly not prepared for his “You said it. Now let’s do it”, I tried to defer the challenge by a classic stalling tactic – “Which one?”.

I would like to believe he is starting to think like me. But in all likelihood, he just remembered the last of the various examples I gave. “Let’s do the random new friend thing”. “Okay”, I said. Clearly, I was anything but okay. I needed some time to think this one thru. But soon enough, I had an idea. “How about we stop for a tea?”, I asked my brother. He was obviously tired of the traffic and readily agreed but the problem was it was nearly 2 PM. Well past lunch time. Where would we get some tea?

I guess where there is a will, there is a way. Under five minutes, we found a place that would serve tea. The tea stall lady was all by herself in her stall. Which was great – since I could talk to her at length. By this time, my nephew had grown cold feet and was suggesting that we probably should try the next tea stall. “Oh! come one. Let’s get out. If you don’t want to talk – that’s okay. Your job is to take pictures on my phone”. Which he was totally up to. Actually anything digital is like a candy to kids of today!!

And that is how we got to know our “Erenga-r chaayer maasi”. Erenga, we found out from her is the name of the village nearby and where she is from. Google maps showed this village to be a few kilometers due west of Chandannagar. “Chaa” means tea in Bengali (and not so surprisingly, many other languages in the middle east) and “maasi” is an endearing term every Bengali uses to respectfully address a lady (literally means “my mom’s sister”). And this is on Highway 13 – often called Delhi Road – connects Dankuni to Mogra and and is used to bypass the Grand Trunk Road on the west side of the Hooghly river.

We also learnt that seven months back she fulfilled one of her dreams and opened up the tea stall by the highway. She gets up early in the morning to make bread and omelette for breakfast for road side travellers along with tea of course. And then makes “ghugni” in the afternoon for lunch. And she then closes shop around 6 PM.

She also took me and my brother all around the shop showing us her set up. As my nephew kept on taking pictures one after the other. My brother explained to him the physics behind how the large earthen pot kept water cold for summer use. Here is one thing that struck me. Her set up was pretty standard. You can see from the pictures that she smashed coke (coal rocks) by hand and then used them to light up her earthen oven (‘unoon”). She had the standard kettle, glass and so on. But she had something else – the large coffee jar/pot (see pic) – that I had never seen in a roadside tea stall in my entire life. You see them in the restaurants where they fill it up with hot coffee and it stays hot for a long time. You simply pour coffee out of it.

I asked her, why and how did she get that coffee jar/pot. She talked about how many of her customers were getting impatient waiting for her to make fresh tea. To solve that she found out about this jar/pot and got somebody to buy it for her from Kolkata!!! My first thought was “That is pretty entrepreneurial”. My second thought was “Ah! More travelers in a deathly hurry to reach their destination”.

As I said good bye, I told her that we will stop by next time we were on that road. She repeatedly asked us to come during “Joyisththo maas” (around May/June). Evidently, her village is famous for its mangoes and she will keep a few for us!!!

Not sure what the nephew made of the whole experience. But he spent about thirty minutes explaining to my dad and mom in great detail the whole event when we reached Kalyani. And they sat with him listening with rapt attention… They clearly were in no hurry to reach any destination….. 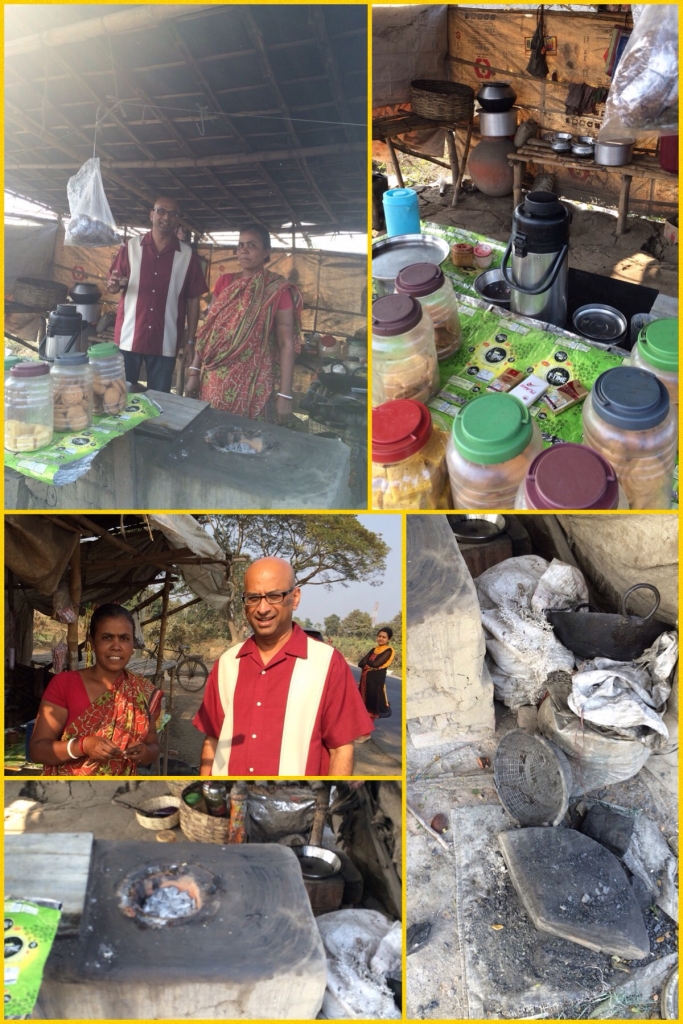