Oh! What a yarn of lies we weave!!

We checked out of the resort and were heading towards my brother’s home in Kolkata. A few minutes into the journey, I just floated the hypothetical “How about we head back to our parents in Kalyani?”. Of course, there were always those initial “Would be great, but what about…..?”. Ultimately, the surprise element of the adventure was enough that we decided we will change course. The price to be paid was that we would have to wake up very early and head back to Kolkata at a God forsaken time tomorrow morning.

The journey was a tad tedious what with my brother getting caught driving without a license (he left it at the resort, the cop was nice enough to let him go after talking to the resort) and getting caught in a tight jam due to construction. After about four hours we finally had covered 100 km (60 miles).

Of course, there was complete mayhem once we all walked in our parents’ house. Remember, they were under the impression they were going to see me in another three to four months when I left home a few days back. Then the two nephews confounded their whole confusion by trying to pull their own stunts of surprises. With all the commotion, my sister and niece came up from downstairs and promptly added to the confusion.

You can see in this picture my elder nephew holding court and has convinced half the crowd that we are leaving in about another hour’s time. Of course, slowly but surely he is getting caught in his own lies. But the best was when my mom demanded to know why do we have to leave tonight (which is untrue, by the way) and before my sister in law could explain that she had duties in her school tomorrow for India’s Republic Day ceremony (which is the truth, by the way), my brother added for good measure “Kaal Obama aaschhen” (Tomorrow Obama will be coming).

My father who is hard of hearing raised his voice “Kaal tor Baba Ma aaschhen???” (meaning Your inlaws are coming in tomorrow?) 🙂

Right now, there is absolute chaos and total confusion. At this rate, even I might forget what are our real plans are 🙂 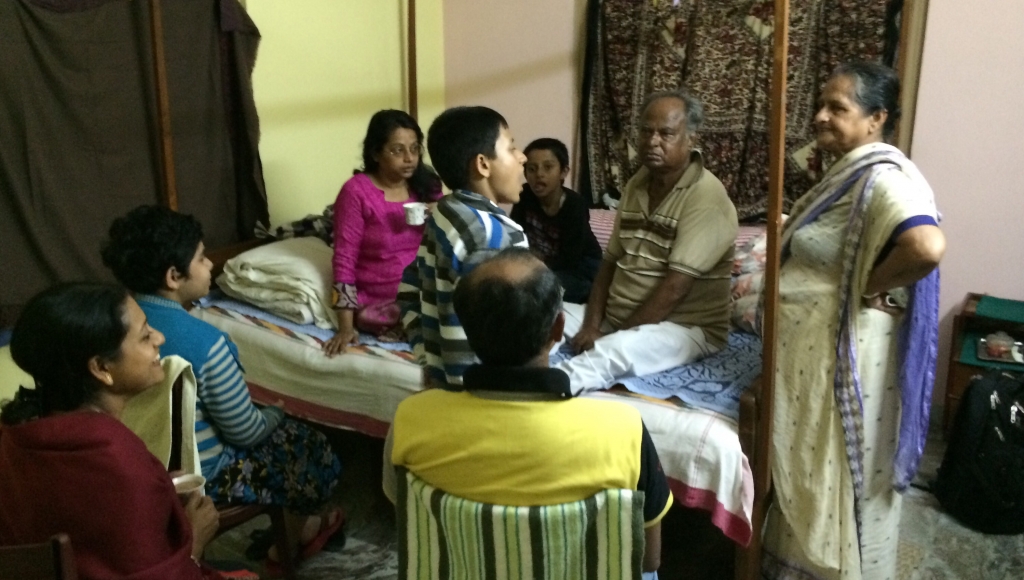