After we set out from my first friend’s house this morning (that story coming later), we headed towards our last destination with our parents which was kept a complete secret. My brother and I had worked this out. Parents had no idea but we were attempting to go visit my eldest cousin (Kajol-di) – my dad’s only brother’s eldest daughter. The challenge – which turned out to be the least of our challenges was that I was not being able to contact her on her mobile phone. The phone would ring, she would pick up and then there were only inaudible noises. I had been attempting this for over two weeks. I could not even find out where her village was.

All I knew was that her village was called Norja. Every attempt to search for Norja or Narja on Google maps promptly landed me in Norway. As smart as Google is, it had not a clue that I had no desire to visit the land of difficult spellings :-), at least as of now! I kept on searching for those two names on the internet and finally stumbled upon a government tender to bid for road construction between the villages of Basuda and Norja. Finding Basuda in Google Maps was rather easy. And then started looking for roads coming in and out of Basuda. And that is when I found a village called Narjja!! Why they put two “j”s I don’t know but I found my village.

As I started giving instructions to my brother on the road directions, my biggest worry was whether my cousin would be home. This cousin is special to me. There is a history here. My parents had taken over the responsibility of raising this cousin since my uncle had four kids in quick succession (including a set of twins) and was struggling a bit. Eventually a few years after my sister was born, she went back to her dad. But in the meanwhile, she lived with my parents and went to school. Also, she took care of me and played with me and all that when I was barely months old. You can see me in the black and white pictures from those times.

Within a few minutes, my dad grew suspicious that we were not heading home. He kept on asking where we were going and my brother and I kept on evading giving a straight answer. And he kept on getting impatient. Then we met our next challenge – A sign that said “Road closed”. That is it! No guidance on diversions or alternate routes – just that the road is closed!!! My brother, who has always treated all road signs as merely suggestions just went around the sign and proceeded.

We soon realized why the sign was there. The bridge on a river was broken. Literally snapped!! There was no road around it!!! But this is India!! People make roads when and where they need them to be. My brother, along with a tractor and a few other assorted vehicles left the road and start climbing down and then drove over hard fields at a snail’s pace, crossed the river which did not have much water to write home about and then came up the other side over complete dirt. Finally reached the road on the other side and then proceeded like nothing had happened!!

Eventually, when we were within a kilometer of the village, I called her again to get some directions. The good news was that I could actually hear her. The bad news was that she told me she was not in her village. She had gone to another village ten kilometers away!! Since we had managed to get past a broken bridge, this was not going to stop us. Found out the other village (Bhatar) in Google maps and headed in that direction.

Before long, I was able to see my cousin – who to be honest, I did not recognize at all even as she approached me at the tea stall in that village where we were waiting for her. Her first reaction? She just started crying seeing us. I am sure she had flashbacks of those days when I was barely months old and a complete nuisance to her 🙂 We chatted for half an hour and had two rounds of tea.

I had only two pictures of her from those days. I had copied them on my phone before I left Atlanta just to show her if we met her. Which I did. But more importantly, as you can see in the pictures, I got everybody to take pictures today standing in exactly the same sequence as those two pictures. I just wanted to see how two pictures with same people would look forty eight years later!! You can see for yourself! Cool or what? 🙂

Eventually, we gave her a lift home to her own village. As we said good bye to her, you could see her pride welling in her seeing that little month old cousin of hers has grown up so much! Every villager that came by – and there were quite a few since a car is a very unlikely sight in those dirt roads – she would introduce me with three phrases – “Kakar chheley. Engineer. America-y thhakey” (meaning “My uncle’s son. Engineer. Lives in America”). And that is all there was for anybody else to know, she figured. You have to be in the context of small villages in rural India to understand the power of the words “Engineer” or “Lives in America”. That “Kakar chheley” part wasn’t that powerful though 🙂 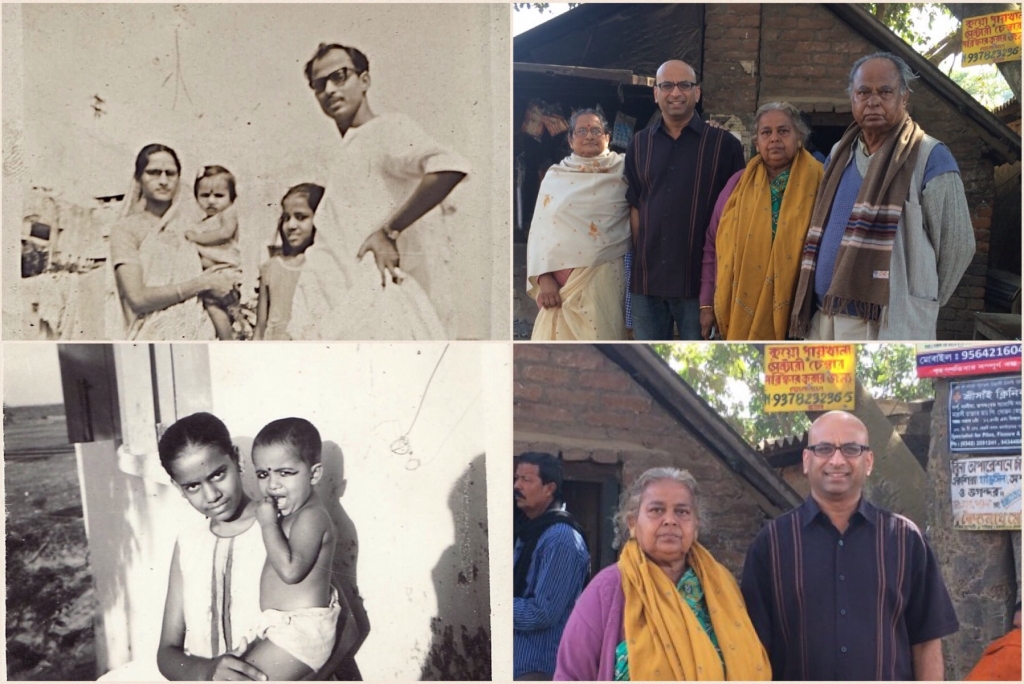