These days your kids will befriend anybody :-)

During this morning’s run, as we were pulling into the corner of “I-Sector More”, I asked my brother if he would be game to meet somebody that I have never met myself either. He, like myself, is certainly not above barging into a stranger’s house at early hours of the day. He did not even ask me who was I talking about 🙂

So, after locating the exact house from the last names on the mail boxes, I walked up the stairs and rang the bell in one particular house. Presently, a gentleman opened the door and looked quizzically at me 🙂

“Apni aamaakey chinben na” (You won’t know me), was my first ice breaker. Bad move. In these days of random day light robberies in Durgapur, it is never a good idea to barge into somebody’s house in shorts and long sleeve shirts announcing “You don’t know me” 🙂 Especially when another similar looking guy was lurking behind in the stair steps 🙂 I am sure he was thinking “Chhnichkey chor naki?” :- ) Petty thieves or what?)

“Ami Madhubanti aar Neel-er Atlanta-r bondhu”. (I am Madhubanti and Neel’s friend from Atlanta). (Madhubanti, by the way, is his daughter). Another disastrous move. You never recover from an awkward introduction by saying you have traveled a long distance to talk to the parents of a friend you know. It kicks up the worst fears in a parent. Second strike 🙂

At that point, I got control of myself and did a re-do by explaining that I am from Durgapur and that I live in Atlanta and am visiting my parents in Durgapur. The last part was factually incorrect (which I corrected later) but it quickly put him in a familiar frame of mind and then we were able to talk for some more time 🙂

About the only worse way it could have gone otherwise is when he asked “Ki koren aapni” (What do you do), if I had avoided the prospect of explaining what geospatial data analytics is and made short shrift of it by saying “Bar-e kaaj kori. Drinks mishai” (mix drinks at a bar) in order to hang on to something he could hopefully relate to quickly. I could almost see him slamming the door on my face muttering “Ki modo maatal-er pallay porlam re baapu” 🙂 (I will leave this translation to my Bengali readers 🙂 )

Fortunately, my recovery worked great. And we had a short but great conversation. He made me promise that next time I will come in the evening and have an “adda”. And I agreed.

Finally, I had to solve the problem how to get Madhubanti to believe that my brother and myself actually was running from Citi Center and landed up at her place. First, I tried calling her up in Atlanta. She wisely let my call go to the voicemail. (her dad had no such option when I knocked on his door). Then I thought I would casually mention the pet name her parents call her by that I just learnt and also further learnt that she hates it if anybody else knows it 🙂 Out of sheer fear of my skin, I went with a far more painless option – got my brother to take a picture of us together 🙂

And then just like that, we hit the road and were gone…. 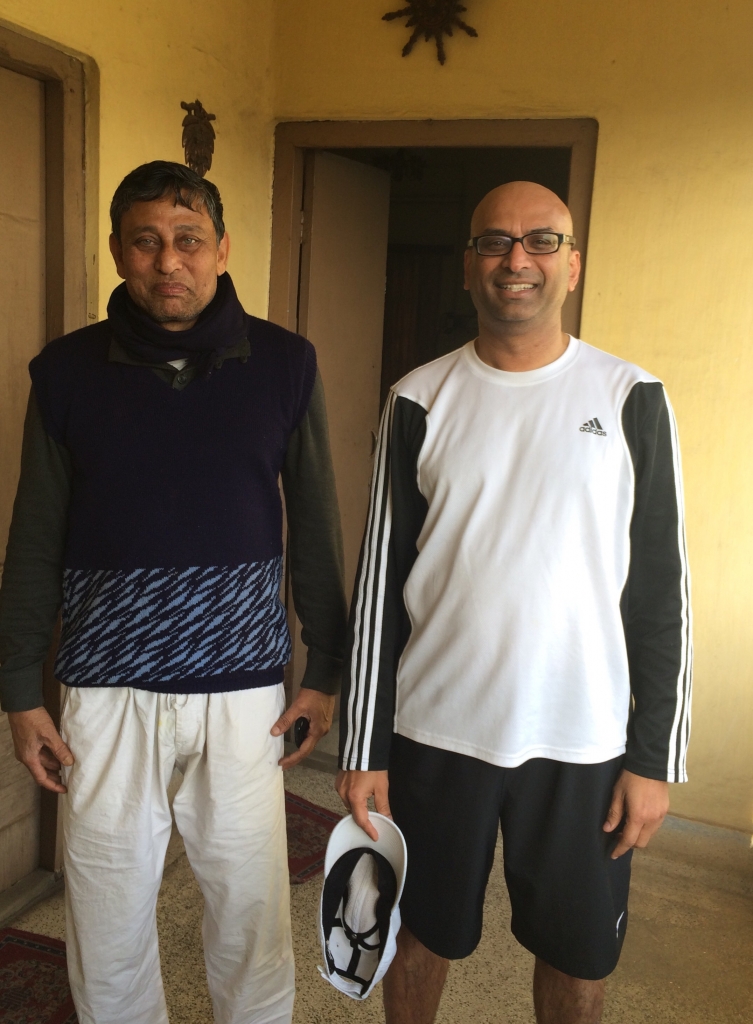