While trying to locate the exact location of my dad’s birthplace, we talked to and made friends with a lot of the villagers today. At some point, I had the presence of mind to ask one of them to lead me is the eldest person in the village with the assumption that he or she would know somebody that my dad had heard of.

The news must have traveled thru the village soon. While we were busy checking out my granddad’s temple, we saw an old man hobbling towards us. Before we saw him, we heard him. He was yelling “Ami Kali Roy-er chhele. Ami Kali Roy-er chhele”.. (I am the son of Kali Roy). My dad paid no attention since he is pretty hard of hearing anyways 🙂 That confused the elderly gentleman no end. Somewhat clueless, he looked at all of us and asked “Damu konta?” (Which one among you is Damu?). That is when my dad asked him who was he.

He also asked us to visit another gentleman – which we did. (He himself did not join us though – and from another villager I gathered that the two families are not on talking terms!!!) We went to another house and told them about who our dad was and if we could meet the person we were looking for. The folks there brought us chairs to sit down. And we waited and waited.

Eventually a very old man came out – taking one painful step after another helped by his walking stick and a young child. He trudged his way to my dad and asked “Tumi Nitai-er bhai?” (Are you the brother of Nitai?”). Once my dad confirmed that, he could not help control his emotions. He started talking about how he had seen my uncle last in 1940 and that they used to play together and never got a chance to talk to him after my dad’s family left the village. And then he asked the inevitable “Kemon aachey?” (How is he?). His face completely fell when he realized that my uncle is no more. “Ekey ekey bondhu gulo sobai choley gelo” he murmured (“One by one all my friends went away”). Anyways, he stood there for some more time and talked about our ancestral family.

It is these two gentlemen who helped me narrow down the exact spot where my granddad’s hut was. Thru them, I reconstructed a few more family facts. Evidently, my granddad was a deeply religious person. He used to shave his head off (that DNA has flown thru to me :-). Unlike me though, he had a “tiki” – which is that tuft of hair in an otherwise shaven head that you might have seen on some old Hindu pious men or even ISKCON disciples.

Evidently my father was the youngest of four siblings. Only the eldest (Nitai) and my youngest (my dad) survived. My granddad died of throat cancer. Unfortunately, nobody has a picture of him!!

But watching people who got separated about three quarters of a century away reconnect thru technologies like Google maps and Wikipedia … that was a lovely treat!!! 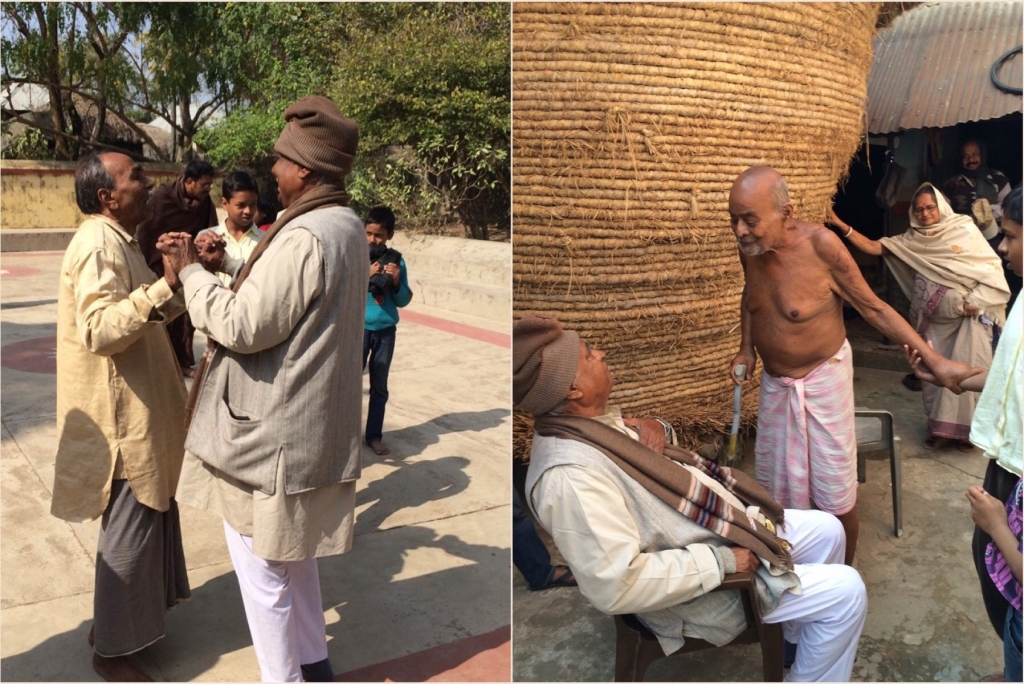