How a music major taught me to write code

This goes back to mid seventies. There was this young guy majoring in music in college. Rick Roberts happened to be his name and French pipe happened to be the instrument. The young guy was smart and talented enough to rise to be a band director. His dreams came crashing quickly when he talked to somebody in his line with a lot more experience who dissuaded him from this line given the lack of career opportunities.

Not knowing any better, he followed his brother’s advice. Talked SMU into letting him in to a one-year MBA program. (this is late seventies; there were no pre-reqs for college admissions). Post that, he scored a job in the marketing department of one of the biggest employers in the Dallas area. His job was to go thru the foot-high reams of computer output to analyze data.

Remember, these were the days of long computer sheets and two layers of carbon paper for copy. Invariably he came home with arms filled with carbon paper ink. He decided that was not what he wanted to do. But, he also reasoned, since those were the printouts from a computer, obviosuly the data was sitting in a computer somewhere. All he needed was access to that computer and figure out how to get the computer to do his work for him.

Except that it was against the policy in this company for marketing folks to get access to the computers. Eventually, he convinced somebody in the data center to give him his user id and password (now you know why I am not mentioning the company’s name 🙂 ). With some effort and time, he learnt the programming language and how to get the computer to compile the analysis for him instead of doing it manually. With one caveat. He had to do it on the sly. Which meant, he would do it during night. He would go to office during the day, twiddle his thumbs for some time and then walk up to the boss and show the results. His boss (who had no idea of this) would never believe his output and then used to be astounded by its accuracy!!

Many years later, access to computer was relaxed and that he is when he got into serious programming. He was adept enough in programming that the top computer science recruiter of Dallas area then – Texas Instruments hired him. There was a super programmer called Lamott Oren in TI. Rick’s job was to understand and learn the code that Lamott wrote. As Rick put it – Lamott would come one afternoon, spit out a bunch of Lisp code and then Rick would take the whole week to understand it!! In a complete twist of fate, many years later, that LaMott, Rick and myself worked together in the same team in a different company!!!

It was in that company – i2 that I got the honor of working side by side with Rick. The product he oversaw – Factory Planner – is without any doubt, the most successful supply chain product that I have ever seen. It became the flagship product for i2. His push for simplicity and eye for what makes a product succeed was beyond any comparison.

Fast forward a little later. I had long left i2. Rick’s position was eventually eliminated in those days of mass outsourcing and he was let gone. Disappointed that his role was eliminated, that day, when he came home, he went for a walk on the Main Street. There happened to be a guy playing an Irish flute. He stood there and listened to him. On a whim, he bought a flute from him for $3.

Then he practised like heck at home. An elderly gentleman suddenly practicing Irish flute in the kitchen for hours together can be intense for any family!! It was intesne enough that his twenty year old daughter decided to move out from home 🙂 Luckily, his wife, as he put it, decided to weather it all. Now, he is so good at it that he is often an invited and featured artist at events around the metroplex.

After many many years, Rick Roberts and I met up at an Irish bar over some beer, fish and chips. It was absolutely unbelievable getting in touch with somebody who I learnt so much from in my early stages of professional life. 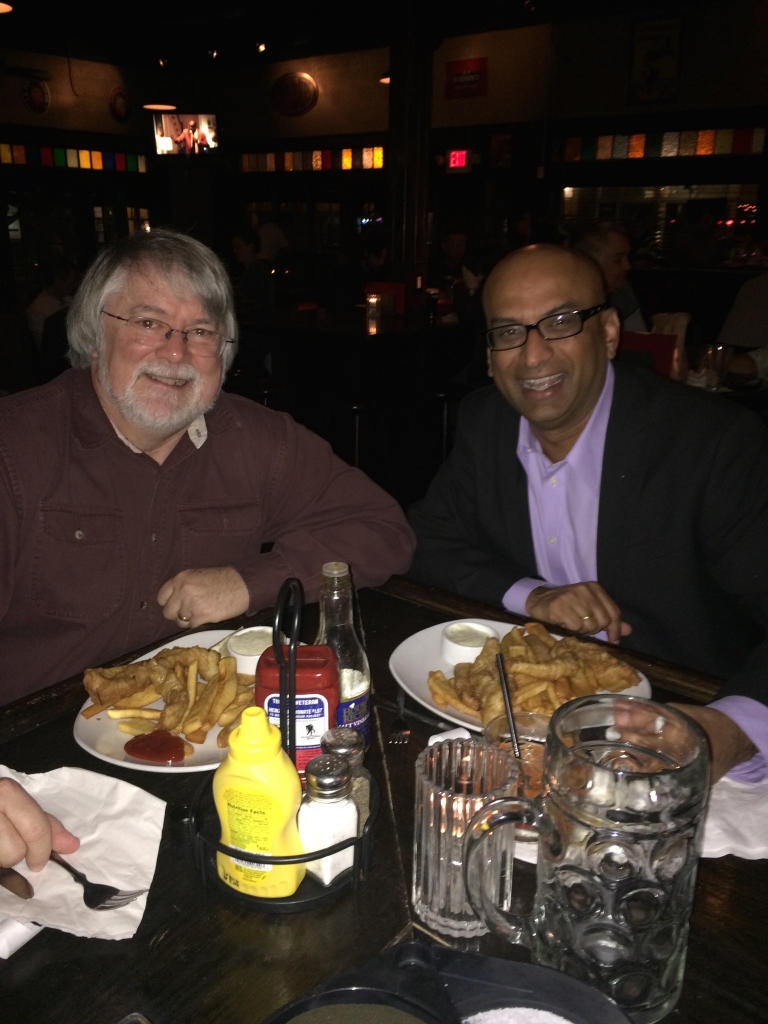