Picture this – circa 1996 – a newly minted manager (in fact, first time manager) – yours truly – gets a chance to present his team’s activities to the CEO. I invited my entire UI team to attend the presentation. The presentation went swimmingly well, except for one minor hitch.

And that hitch turned out to be my understanding of the English phrase “dropping the ball”. I was eloquently presenting all our achievements and successes. Somewhere, there, I had to explain that we had to deprioritize a sub project called “UI Editor” in favor of something else. In fact, the developer working on it – Stacy Roderman – had to be pulled from that and put on high priority project. However, I spoke about it as “We dropped the ball on the UI Editor”. The slide clearly showed Stacy’s name against the sub-project UI Editor.

At the end of the presentation – which, as I said, went extremely well – I was feeling really good, when another team mate – Tom Moellering, came by and said “You might want to talk to Stacy”. Eventually, I went to Stacy’s room and I could see that she was upset. Not knowing what is going on and wanting to give some privacy. I asked her if she wanted to go to Starbucks for a coffee. She readily agreed.

We did not talk much as we walked to the car. I had barely started the car and started pulling out of the parking lot when she started laying it down to me. She was bawling and taking me to the cleaners, demanding to know why would I berate her in public – that too in front of the CEO. As you can imagine, I had not the faintest idea what just hit me.

I did keep my calm and tried to get out of her what seemed to be the problem. When I finally realized what the problem was, I was really amused by the comical scale of the misunderstanding caused by my lack of knowledge of an English phrase. She did not find it that funny at all. (Fortunately, she found it as funny as I when we talked about it this evening – which is why I am even daring to write it 🙂 )

While that was not the only time I got into trouble for not being knowledgeable of the language called English, it was certainly when it was healed very quickly.

We had a great laugh as we talked about it. We, being, of course, Stacy, her husband Brian and myself. Both Stacy and I worked in the same team and over time I got close to her and her husband. That was over ten years back. We had two kids each roughly around the same time and we continued to work in the same company roughly till around the same date.

Another funny story. Coming from India about a quarter century back, I was not terribly used to the concept of divorce and re-marriage. I mean, I knew what it meant – but I had no friends who had parents or siblings who were divorced. Or remarried. Against that backdrop, I am sure you will be sympathetic to my condition when one day, while describing something that I cannot remember, Stacy talked about “My stepfather’s ex …..”. She continued with her sentence but I was stuck at that phrase. By the time she had finished her story, I was still staring at her blankly while my overworked brain was desperately trying to compute who the heck is your “stepdad’s ex” 🙂

It was fascinating catching up with Stacy and Brian today. Once again, I reminded myself how blessed my journey has been by the presence of some really great fellow travelers on this journey we choose to call “life”. 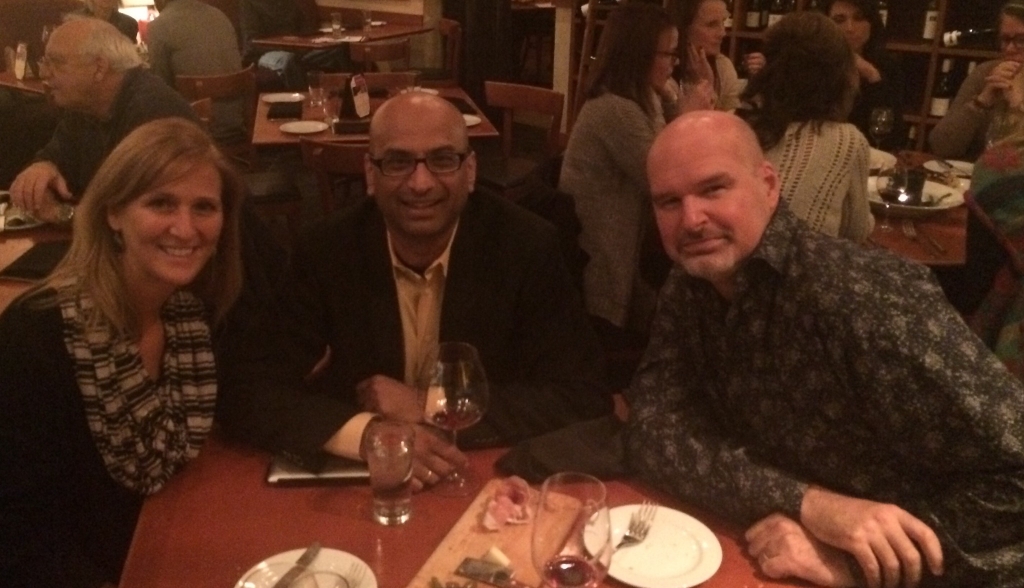