The day an Oracle DBA helped me check in my luggage

For the last few months, I have been trying something new in my weekly travel routine. I check in my suitcase. All I have over my shoulder when I loiter around in the airport or board the plane is a very small shoulder bag. Which has my iPad, a few printed pages, a yellow pad and of course two of my fountain pens 🙂 Given that I have eschewed sitting in a office for over 12 years and use iPad as my only computing device for office ever since they invented iPad (no laptop or desktop), I often have the luxury of watching how people with trappings behave. For example, the rush to board a plane! These days, I am usually the last person to board. Once, I almost lost my seat since I did not board with the rest of the first class passengers. I will tell you that story sometime.

Today’s story was about somebody I met when I went to check in my suitcase. As I walked into the DCA Delta counters, I noticed that there was nobody at the automated check in counters except one Delta agent standing around to help anybody who needed help. I had some time before my next call started (and LOTS of time before my flight left). So, purposely, I went to the unit right next to her and started chatting her up as I punched in my details at the kiosk unit.

“How long have you been with Delta?” I asked this lovely lady.
“Three years”.
“Wow! That is pretty recent. What were you doing before this?”
“I was an Oracle DBA”, she said.
“SAY WHAT??? What do you mean you were a Oracle DBA? And what are you doing here?”

And that is how the story unfolded. I was so engrossed that my unit timed itself out – so, I had to log back in again. You cannot blame me. I was stunned to realize that I was with a grandmom of five – who worked for Fannie Mae as an Oracle DBA for 13 years!! And during the downturn, as the government cut down costs, she lost her job. For the last five years, she has been unsuccessfully looking for a database job she would like. In the meanwhile, to support herself, she is working as an hourly employee at Delta helping people check in at the kiosk counters!!

I asked her if she would mind talking to me during her work time for a few minutes. She accepted. So, I got my luggage tag, handed it over to the TSA guys and came back looking for her. She was still there. I asked her about the difficulty of going from her six-figure job to an hourly wage employee. She told me it certainly has been very difficult but I detected no bitterness in her voice. I asked her what did she do during her off hours, expecting to hear a grandmom talk about her grandkids. “Oh! I keep searching for a career that I can flourish in”, she said!!

I got to learn about how she started her career in a 4GL environment and taught herself Oracle RDBMS and worked her way up to be a DBA. She talked about how she upgraded her skills to 11g a few years back.

Finally, I asked her if she would mind taking a picture with me. And that is how, I met Thomasine T at DCA airport. Her dad’s name was Thomas. They were expecting a son. When it turned out to be her, her parents just named her Thomasine. She also goes by the name Tammy.

If any of you travel to DCA, say Hi to Thomasine if you see her near the Delta counter. If any of you need a smart grandmom who can do a thing or two in Oracle, certainly contact her. It would be great to see if together if we can make a difference to the life of a hardworking grandmom.

I have to believe in that. That is my only hope of personally making something out of myself when I grow up. And grandmoms like Thomasine …

As I started walking to the TSA Pre Check line, I asked myself if I had the mental fortitude to take a hit like Thomasine has and not give up fighting…. I suddenly remembered a Bengali song.. 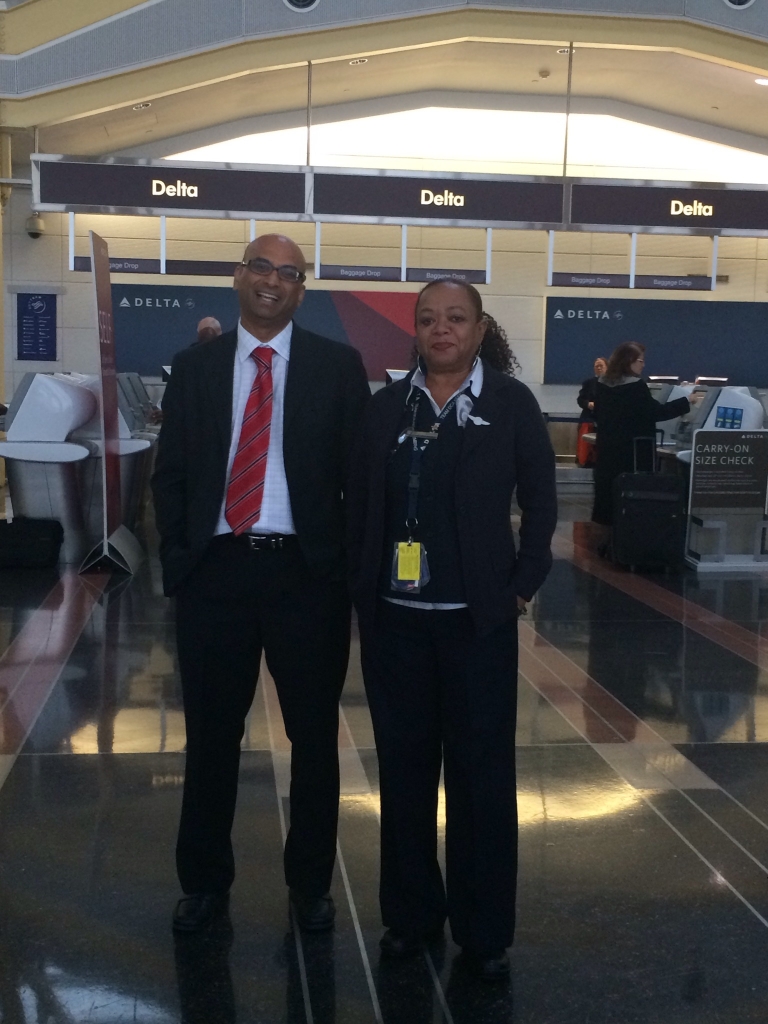