And there was always that guy who was left behind…

I went to a residential (boarding) school for my junior and senior years in high school. It was a very academically oriented school with strict discipline around study hours and not leaving campus without permission and all that. This being the first time I stayed away from home, it did not take much time for me to be homesick. A big driver for that was the food in our hostels. There is a reason the common term to refer to the canteen or food hall in hostels in India is “Mess”. This school’s food would make any airline food look like a nine course formal dinner, by comparison.

The inevitable result was that anytime there was a long weekend or breaks in between semesters, all of us would hightail it to home to spend the days with our parents and legitimate food. After school got over at 3, we would run back to our hostels, grab our suitcases and briskly walk to the campus gate to catch a bus – and for many of us – a train to go home.

All of us – except that one guy. Shashwata Roy Burman was his name. I remember every time I would be running out of the hostel with my suitcase, I would see him coming back from the mess with the evening food in his hand. Once I had asked him why did he never go home and instead stayed by himself in the hostel. It is then that I had learnt that he actually was nowhere from near the school. (We were all from within 100 miles of the school). In fact, he came from another state and the only way to get there would be to fly. I suspect train might have been possible but it would have probably taken three to four days to reach because of the geography. While the aerial distance was long by itself, the map of Bangladesh made it even more difficult since he would have to basically go around that whole country!! And of course flying those days was very expensive.

I remember feeling bad every time I saw him when I headed home. I had even offered him to come and stay at our house. But he always politely declined and in all the excitement of going back home, I would forget about it soon.

After two years, we went on our own ways and never saw each other again. That was March 1985. Once in a while I used to wonder whatever happened to that guy from Agartala. He was very good in Math and Physics. Had a dense lock of unkempt hair and stubbles all over his face.

Got the answer today!!! Nearly thirty years later, I saw him again this morning.

Recently, I had found out that he lived in Orlando and has been this close to me for a long time without me ever realizing. Just a few months back, I was in Orlando with my family! I had not the faintest idea that I was so close to him!!

Once I was able to pin him down on a world map, then came the wait to see when would I be making a personal or business trip to his city. Well, this week was the “when”. While I was not in Orlando, I had work for three days in St. Petersburg. Close enough, if you ask me. At the crack of dawn, right after 5:30AM, I set out in my rental car and about a couple of hours later was ringing his door bell!

I had offered that I take his wife and him out for breakfast. He would have nothing of it. He cooked breakfast for me. First, over outstanding tea that Sudeshna (his wife) had made and then over breakfast, we caught up about our old friends, our parents, his career moves and so on. He looked as boyish as ever and I would have never guessed that he had a fourteen year old son if he had not told me so.

If you ever are curious about how fate can play its cards in mysterious ways, you will love this. As we tried to figure what was going on with each other’s families year by year, at one point it became too weird.

Me: “So, where all have you lived in US?”
He: “First Naples, then Fort Lauderdale and then Orlando”
Me: “Where in Fort Lauderdale? We used to live around that area too”
He: “A small place called Coral Springs”
Me: “Get out! That is where we lived too. Where in Coral Springs?”
He: “Near University Blvd”
Me: “That is a long road. What was the crossroad?”
He: “Atlantic Blvd”
Me: “Are you talking about Laurel Gardens”?
He: “Yes! You knew somebody there?”
Me: “You gotta be kidding me. Which apartment?”
He: “What do you mean, which apartment?”.
Me: “Describe to me from the mall-side gate – how would you reach your apartment”

I could not make this up, even if I wanted to! As incredible as it sounds. that same guy I lost thirty years back and reconnected today and I lived in the SAME apartment building – separated by a few doors – and of course, a few years!!! Wow!!!

It was just an outstanding experience in my life spending some time with Shashwata and Sudeshna. I got so engrossed in our discussions that I forgot he had to get onto a conference call at 9 AM. As he excused himself, I also let them know that I needed to leave to get back to work. He went upstairs for his call. Sudeshna and I hung back for a few more minutes finishing our second round of tea. As we started wrapping up, I could see Shashwata at the top of the staircase with his phone on mute. I was ready to leave. He desperately wanted to join us as I was leaving, but once again he was stuck with life’s constraints.

I had strong flashbacks of that guy who would watch us from the second floor staircase of our hostel as one by one we left for our homes. 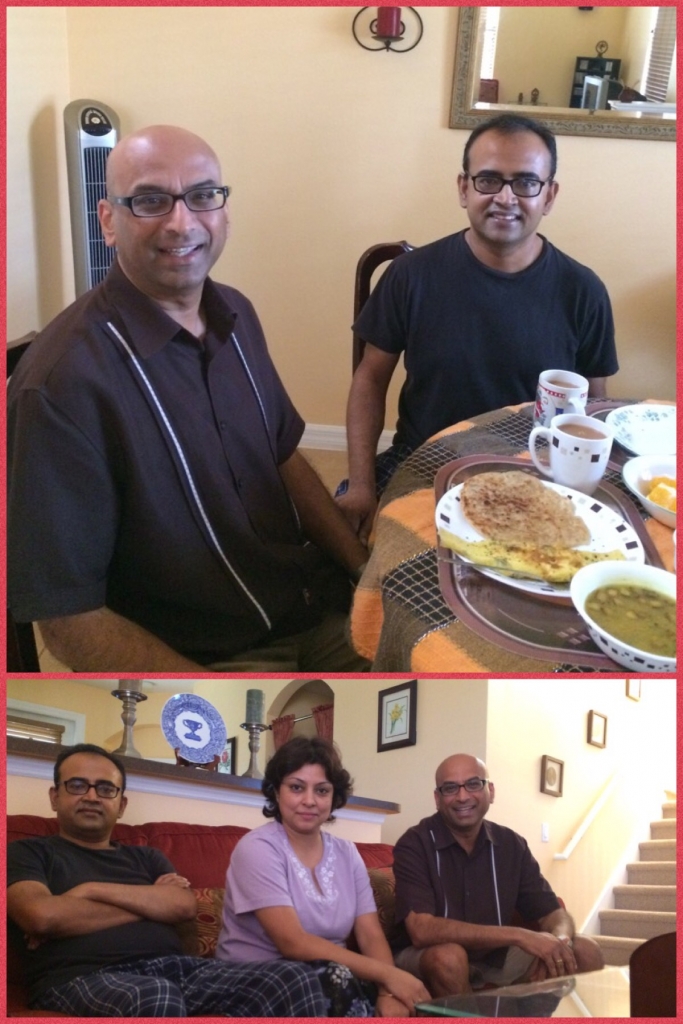