Nothing can shrink my inlaws further in their airplane seats than the prospect of having to talk to the stewards and stewardesses regarding what would they want for their meal. My father in law, at least, puts up a spirited fight. Often, therefore, landing with stuff he had no idea that he had ordered. But he is a good sport – and he will try out a little of everything. My mother in law, on the other hand, pointedly refuses to deal with any of these stewards or stewardesses with anything but head shakes. Which, for any foreigner can be very confusing. Indians are famous for their head shakes. And my mother in law is famous for not getting to eat much in flights. Once in a while, she will recognize something that she knows – e.g. Tea and would order it with great anticipation. And then spit it out after the first sip – because she was expecting tea done exactly the Bengali way. “Era cha-tao bhalo banatey jaanena” (“these folks don’t know how to make a simple cup of tea!”)

A stewardess came and asked them after the meal – “Some digestives?”. Not exactly the way I would have put it, but the packets in her tray clearly showed the picture of aniseed. The next two minutes was a sight. Both of them, totally flabbergasted, looked at the lady, at each other and then across the aisle, towards me. Not in a hurry to finish the fun, I just kept smiling back. Eventually, my father in law said “one” indicating he would try some. And as the lady moved on, I mentioned “Mouri chhilo” (“That was aniseed”) (a very common after meal mouth freshener cum digestive in India). Let me put it this way, my mother in law made me call the lady back so that she could grab a few packets!!!

This being the state of affairs, you can only imagine their reaction when they found out that the last course of meal in their last meal in the last segment of flight (Dubai to Kolkata) was “rosomalai” (a delectable Bengali dessert). The entire inner Bengaliness of their last four month existence outside Bengal was channeled – vigorously, I might add – on that one course!! In the picture, you can see them devouring those hapless plates of rosomalai as if “dhorey praan elo”. Those rosomalais vanished in front of my eyes faster than I could say “Aar ektu mouri neben?” (“Want some more aniseed?”). 🙂 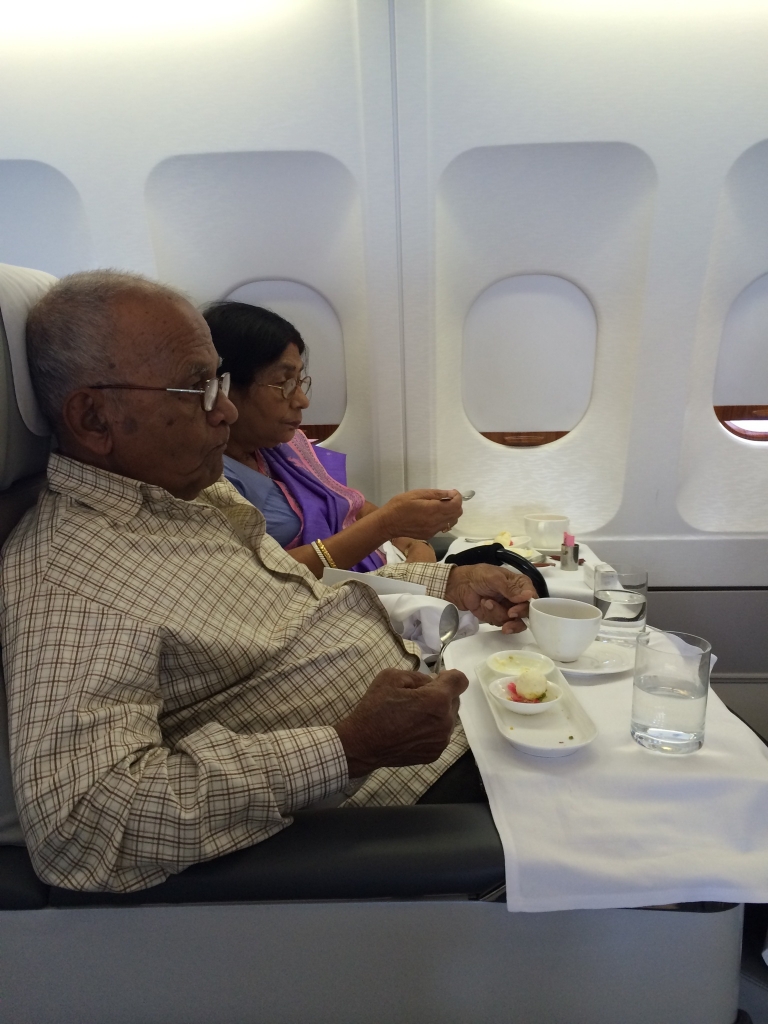