He completed 50 yards – that is the distance from our barbecue to his bedroom in 40 hours!!! Of course that route took a detour through the emergency room and the operating theater in our nearest hospital!!!

So, this is how the story has unfolded so far. The pictures go row by row chronologically…

On Saturday, at about 8PM, my father in law went to the barbecue to get some corn done. He saw a King snake inside, tried to back out and in the process tripped over his own shoe. Fell down and just could not move. A few minutes later, the fire engine and ambulance showed up. The first picture shows the EMS folks putting him in the ambulance.

The second picture shows him in the Emergency room. Went thru all sorts of CAT scans and XRays and by 10PM, it was concluded that he did not hit his head but he did break his hip. He took the news stoically and asked that my mother in law be not told of this till they had finished operating on him.

The nurse came and said “Your dad is very strong. For a guy who has broken a hip, he sustained the pain of turning to take a X-Ray better than anybody I have seen in my life”. I merely pointed out that he really is not my dad, instead, my father in law.

The next picture shows him waiting to go into the Operating Room at 8 AM next morning. That was the couple of hours I did not get to see him. The next time I saw him, which is the next picture, is when he was back in the hospital room, resting.

As the next picture shows, he had regained consciousness by 12 noon and was already eating food and eager to get back on his feet. The doctor admired his mental strength but asked him to take it easy for a day. Well, he did get a physiotherapist come and see him who was willing to let him try standing up – which he did and then he shuffled his legs to move forward too. The physiotherapist later told me that he had never seen anybody bounce back this quickly after a hip surgery at the age of 80!

Totally pleased with himself, he started reading local newspapers as you see in the next picture and asked me not to stay in the hospital that night. The next morning, early as a lark, I showed up with his Indian tea that Sharmila had made for him and the first thing he wanted to know was when could he try walking!!!

As the next couple of pictures show, within 24 hours of a hip surgery, he convinced the hospital staff to let him walk with a walker and also climb up the stairs today. The lady helping him climb up the stairs, simply told me “I am glad. But he scares me!!”

The next picture shows him at about 10AM, he is all dressed up and ready to go home. The surgeon came and plainly confided, “I can’t believe I am doing this … but your father in law is good to go home”. The hospitalitist (yes, there is such a person), concurred.

I am going to spare you all the details of struggling to walk or get up in a car with one hip bone surgically operated upon and inserted with a titanium rod a six inch screw a few hours back,… but let me tell you, once he came home, he certainly did not shuffle to his bed. He dragged himself straight to the kitchen porch (see last picture), sat down with his walker and walking cane on his side, took one sip of the ice wine he loves, grinned from ear to ear and said “We have to find out how the snake got into the barbecue in the first place”.

And as I clinked my glass of Meiomi Pinot Noir against his glass of ice wine, I could not help realize the difference between my dad who has lost total zest for life and my father in law – a clear five years elder, 80 year old – who picked up his life exactly where he left it 40 hours and a broken hip bone before.

There is little doubt that I will fall down in my life many many times like he has…. That is not the point…. The point is….

I just want to get up like he did…. 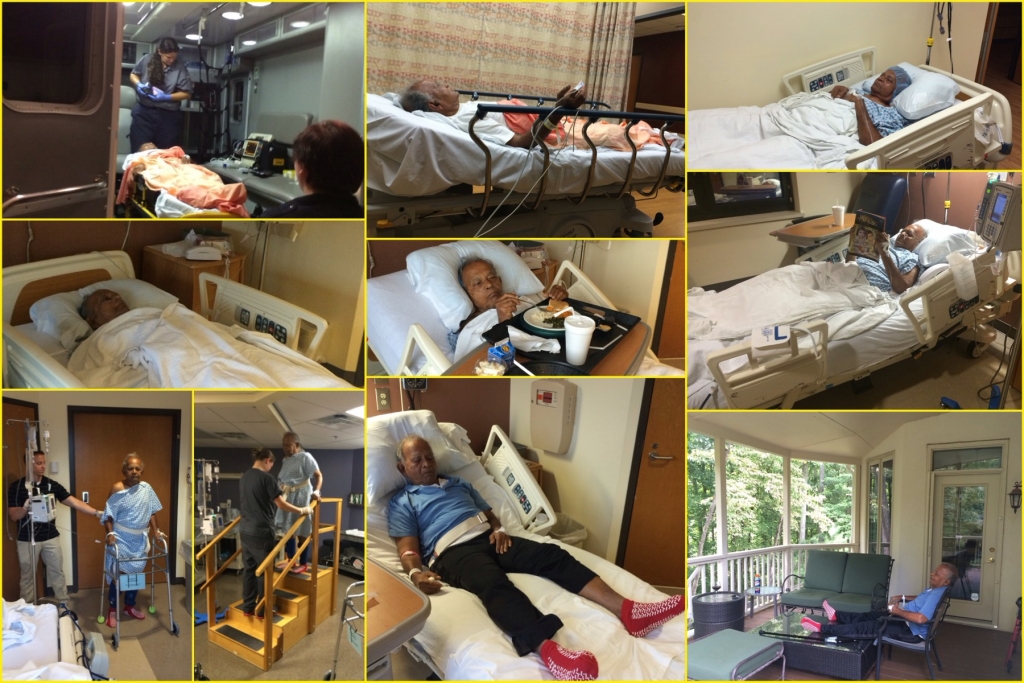