And that wonderful thing called Love.

For about two days, my mother in law has been a mere spectator as events overtook her. Her husband fell down, broke his hip, got operated on, recovered and came back home. All she did was rely on us to give updates (in fact, she did not even realize about the surgery till it was done).

You could see that she felt helpless to help her husband, but she knew that he was being helped by people who could help him better than her. So, she would try to be helpful to them, if she could. Even when we came home, my father in law did not retire with her in their room; instead came out and drank with me. Finally, he was tired enough that he agreed to use the walker to shuffle to his bedroom and sleep.

My mother in law first made sure that I finished my lunch (Sharmila was out doing all the weekday stuff you do with the kids) and then quietly retired to her room. Of course, her next love is Zee Bangla – or whatever popular Bengali TV shows are on – on any steaming website.

I was trying to spend time to myself and then when I had to go inside the house to refill my drink, I went to check on my father in law. And I glimpsed this picture from a distance on their headboard mirror. My father in law – sound asleep. And my mother in law close to him as if protecting him from everybody else in this foreign country while watching her favorite Indian channel on her iPad resting against my father in law.

Realizing the essential privacy of the moment, I anyways went ahead and captured it on my phone. And waited to get a minute with my mother in law later and asked if it was okay for me to make the picture public. Else, I was going to delete it. She was a little amused by my question. She was like “Why would I want privacy if I kept the door open?”. And I was like “I don’t know. This country is all about privacy … Or something like that “.

In any case, that was an intense moment of togetherness, I thought. She finally got him to herself after his terrible fall. And she did not want to disturb him. Just be with him without anybody else… I retraced my path quietly and sat down with my next drink.. 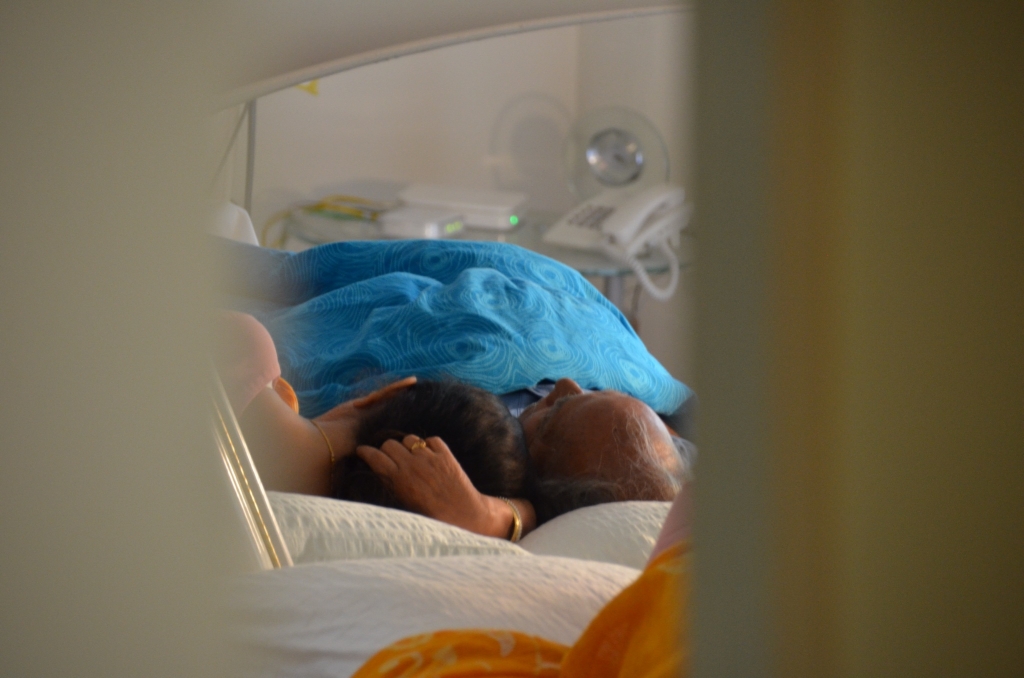