If you find yourself at the Atlanta airport… especially with your kids….

Had it not been for the young lady sitting next to me on my Delta flight back home a few weeks back, I would have never realized that back in 1837, Stephen H. Long, the Chief Engineer of Western and Atlantic Railroad had described Atlanta (my home for the last seven years) as “A good location for one tavern, a blacksmith shop, a grocery store and nothing else”. Or the beauty of the Atlanta airport itself (and I must have visited it – on a conservative basis five hundred times at least).

I forget where I was flying from but I remember as I sat down in my aisle seat, the lady in the window seat next to me asked “I wanted to apologize upfront for inconveniencing you. I did not get an aisle seat today and I will have to bother you to go the restroom later”.

No big deal to me. So I said “Not a problem at all. I can always do with getting up and stretching”. It appeared she always chose aisle seat, just like me. So I asked “Looks like you travel a lot”. “Every week!”, she said.

I did not reveal that that is what I have to do too. Instead, I said “I noticed the Asics shoes you are wearing. Are you a runner?”. “Yes! I try running every day”, she said. “Really?”, I asked, “Does it not interfere with your travel schedule?”. Personally, I knew how difficult that could be.

She agreed but then went on to explain the tricks she had learnt on the road to keep up with her metabolism level and diet control. Of all the tips she gave me, one stuck in my mind. She said she avoided taking trains at airports, cabs if she could help it, moving sidewalks, automated escalators and simply focused on walking or climbing stairs whenever she could in her day to day life. And that night, at the terminal train station, we wished each other well as I stepped into the airport train and she walked away. And I told myself “She had a point. I should try that next time”.

And ever since, I have stopped taking the train at Atlanta station. It actually felt good initially. Then it became a habit. I would just keep walking thru the tunnel dragging my suitcase, most likely on the phone talking to somebody, my eyes to the ground not noticing anything else. Eventually, I would reach my destination and think “That was good. I got some exercise”.

Today, my flight was out of Terminal C. Starting from Terminal T, then A, then B and then C, that was a long walk. But I am glad I did it. Atlanta airport is always known for its art. But the walls in the tunnel between Terminal B and C is a fascinating depiction of the history of Atlanta over the last 800 years. Before today, if you had asked me of Atlanta’s past, I probably would have said “Martin Luther King”, “slaves”, “cotton farms” and pretty much stop there. I might even have incorrectly thrown in Jimmy Carter to show that I was up and up with modern history 🙂

If you ever are in Atlanta airport, especially with kids, do get off at Terminal B station and walk till Terminal C. It will give you and the kids a great understanding of the history of the place called Atlanta today. There are numerous pictures, anecdotes and quotes adorning the walls in a chronological fashion.

That quote from the Chief Engineer was awesome just to look back at it and realize how terrible we often are in predictions. Speaking of hubris, you will find a picture of a young girl – Martha Lumpkin – whose dad, once the Governor of Georgia (and infamous for brutally removing the Cherokees from Georgia) renamed the town “Marthasville” in honor of his youngest daughter! (The city was called Terminus before that because that is where Western and Atlantic Railroad terminated – one more testimony to their imaginative powers 🙂 ). Ironically, the name was changed to Atlanta primarily at the suggestion of another Chief Engineer – from a competitive railroad company!!

Another picture that caught my eye was the famed General of the Union Army – W.T. Sherman. It was not his picture so much as his quote – which is acutely relevant even in today’s world: “War is cruelty and you cannot refine it”.

That walk which should have taken me 5-6 minutes lasted a full half an hour.

And here is the real irony at the end. After walking all that distance, I was so hungry and with such little time to get to the plane that I grabbed some junk food on the way and merrily munched it away, completely oblivious of all the diet tips my fellow passenger had given me that evening. I regained all my calories and more.

I cannot wait for my next flight that might leave from Terminal D or E or F, though! I wonder what those walks will bring to me… 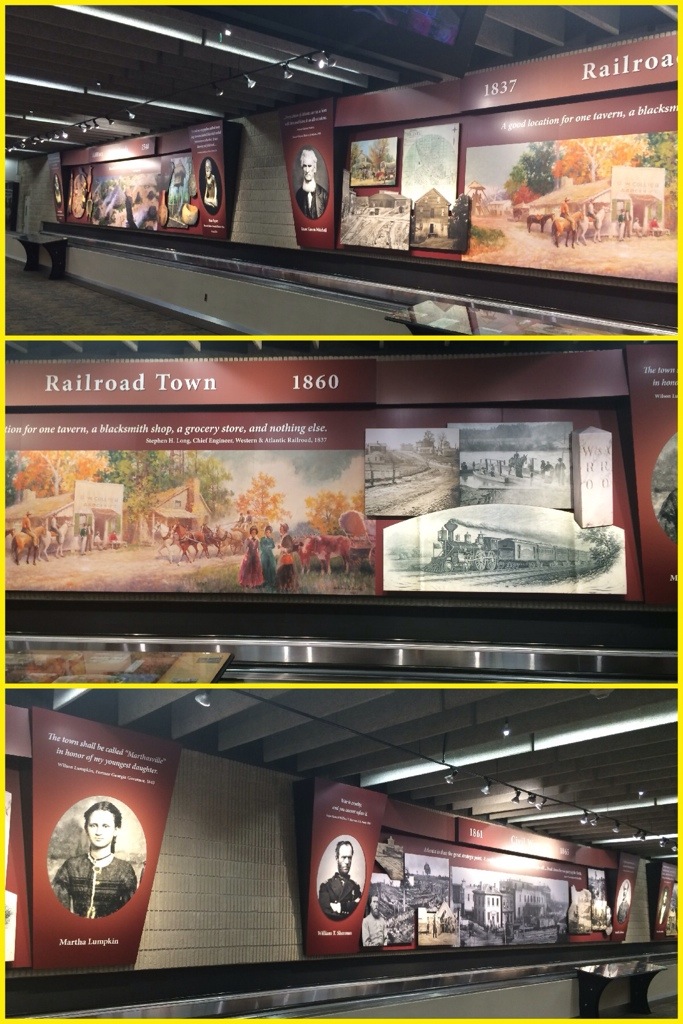