My first Senegalese friend. I think.

Natasha and I were walking down a street of Providence after she said good byes to her new dorm friends. As we crossed a street intersection, while I kept listening to her continuous stories of exciting experiences of the last two weeks, I noticed that we went past a street vendor who was sitting all by himself with quite some kinick-knacks spread around him to sell. After a few seconds, I stopped Tasha and said – “Let’s give that guys some business. It is starting to rain. You never know how business has been for him. Seems to be wanting to make money the honest way.” I was fully expecting Tasha to brush me away. Luckily, she said “I needed to buy something for grandma – let’s see what he has”.

We took a few steps back and as Tasha spent over ten minutes deciding what to buy for her grand mom, I started making my moves to become friends with this stranger. It always starts with “Where are you from?”. He said ” Rhode Island”. Then looked at me, sized me up and added “But I am originally from Senegal”. And that is all the opening I was looking for. I asked him a lot of questions about Senegal, his family there, how good business has been and all I could to get to know another human being without being too much of an weirdo.

Once in a while a customer would come by and I would step aside to give him a chance to push his wares. Add then Tasha was done. But I was not. So, I told her that she should get one for herself. From me. That trick always works. And Silla – that is what I found his name was – and I started chatting again. From his French (Senegal was ruled by the French), to World Cup soccer to his ailing parents back at home, our topics could not have been more varied. I learnt that the name of the capital is Dakar and surprisingly, found out that Senegal is the westernmost country of the “Old World” (Europe, Africa, Asia). It is further west than all European countries!

It did make me reflect on a few things – the similarities of himself and myself – both first generation immigrants – with ailing parents to deal with many many miles away. And how, in spite of all those extremist thoughts that get news time (“playing soccer makes you unAmerican” is my favorite recent example) that make us wonder where this country is going, the inescapable fact is, this is still where people come to simply get a chance to work hard and make a living. Compared to many other countries, it is still a place that offers you a level playing ground to give you a shot at being happy. Sure, you have to work hard for that. But that beats entitlements and discrimination any day.

Tasha was done. She had two trinkets she had chosen. The total was $22. I immediately started haggling. Not sure why I did it. Perhaps it is the Indian in me. Perhaps I don’t want to let myself ever believe that money is an easy thing. I settled for $20. Still not sure why that $2 was important to me when I had the whole chance to not spend money at all.

Finally, I asked Silla if he would mind me taking a picture with him. He stood up to oblige me and that is when I realized how tall he was. “Ever played basketball?”, I asked. “No. But, I sure loved soccer”. And that was one more common thread between him and me and most first generation immigrants I know in this country.

I sure hope to come see him if my daughter ever chooses to go to Brown. Or If I simply happen to pass by Providence. 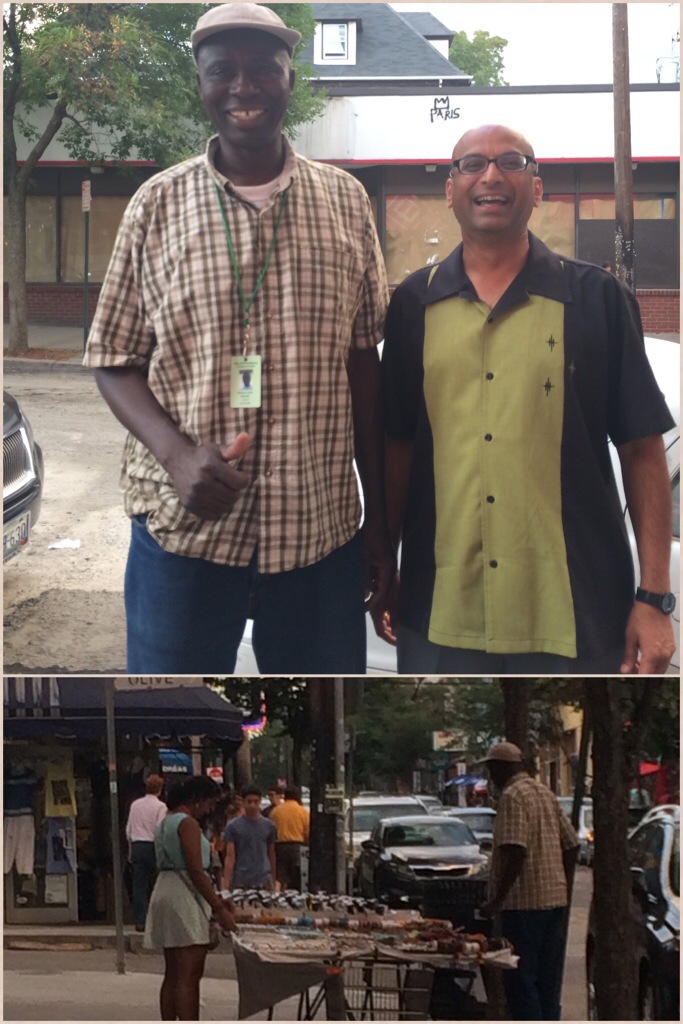