You have heard me often describing life as a random line drawn between various points at which you meet a human being and get to know him/her. And then often the lines bend themselves backwards to recreate a meeting with somebody you have met before to create “intersection points”. Life is all about the richness of those lines and the substance in those points.

And when an old friend of mine, upon hearing that I am near enough for him, packs his family in the car, crosses a country border enduring all the hassles of US Customs and Immigration and two hours later shows up to meet me and my family and in-laws and then checks into the same hotel as us just so that we could spend some more time the next morning, that is when I know that I am drawing all the right lines and creating all the right intersections.

And that is how Sourav Ray showed up with his family last night in Buffalo, NY, USA from Hamilton, ON, Canada. As you can see in the pictures, we simply had a blast. There is no greater story teller than Sourav and there is nothing I would exchange to spend some time with him and his family. The “adda”, the dinner, the after dinner drinks, the morning coffee by the hotel pool… every moment was to be savored!!

Last year, I met Sourav after 33 years when I took my family to the Niagara Falls on the Canadian side. And the next meeting did not even have to wait for a year, thanks to him.

Here is something to give you an idea of how easily Sourav can make you part of his family. If you saw us talking and chatting up about old friends and life in general, you could be excused for thinking that we have grown up together for years. Reality is that our paths crossed only for one year – from Jan 1980 thru Dec that year when we were in eighth grade together. And then he left our school!!!

But the real fun is discovering more intersection points together. Let me give you a couple of examples..

Last night as I was distracted talking to his daughter about something, I thought I heard him mention a name to my wife Sharmila. I paid some attention and figured he was talking about a girl from much earlier times that he had a softness for. I am not mentioning any names here since I have too many social media friends 😉 But I did interrupt him and told Sharmila “Do you remember XYZ that I introduced you to during event ABC”? She nodded affirmatively. “He is talking about his wife”. You should have seen Sourav’s face. He was completely taken aback by the fact that I knew the girl and her husband.

Another one .. Post dinner, we settled down for drinks and this time his wife Monolina mentioned another girl’s name. Again, I was talking to him that time so I had no idea what the context was all about. But I recognized the name. And asked her a question. I was quite sure there was an intersection point there. In front of them, I called up my brother in law (Sharmila’s brother) and he immediately confirmed that the aforementioned lady’s daughter and his son (my nephew) sit next to each other in their class in school! Again, Sourav was just completely aghast. After that he was very wary of mentioning any names lest I dig out some uncomfortable truths!!

As a final example, next morning, over coffee by the pool, he mentioned somebody’s name and that he has worked in supply chain. I figured I should know most people in supply chain. Made one single call (I had the added information that is person is in a Steel company) and asked my friend if he knew this other guy Sourav was talking about. Found out my friend was the boss of the guy Sourav was talking about about 11 years back!!! What is even more crazy, this friend of mine had visited Atlanta this week and come to our house to meet my in laws!!! My father in law was completely sympathetic with Sourav that he should not talk about anybody from his past 🙂

It is those intersection points that keep bringing us closer. Much more than the one year we spent together. 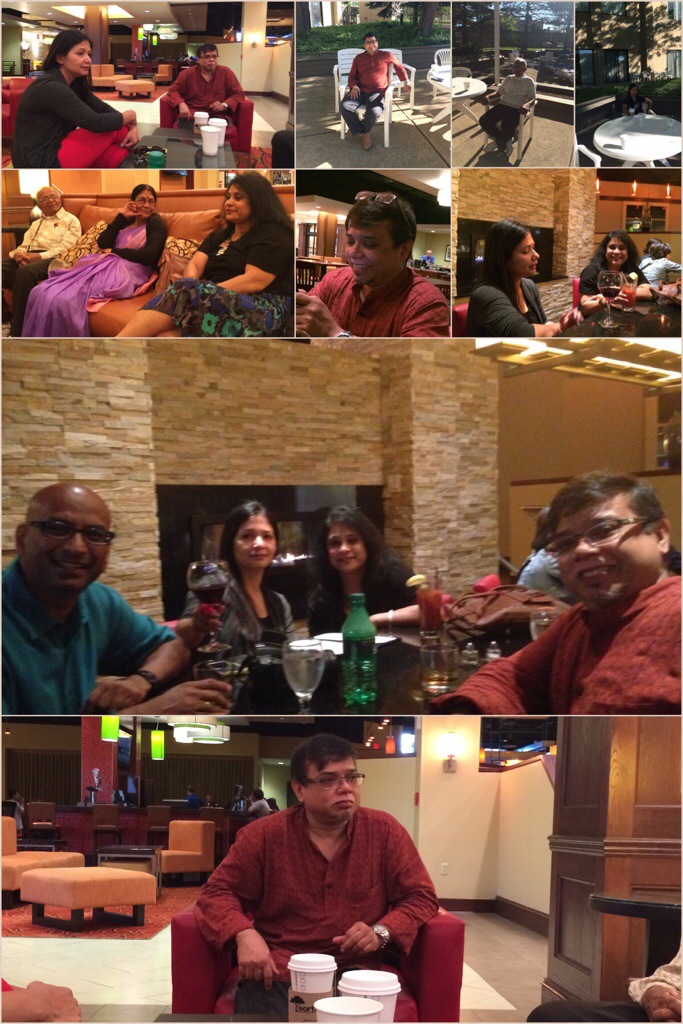