Flight Attendant with the shoes!! 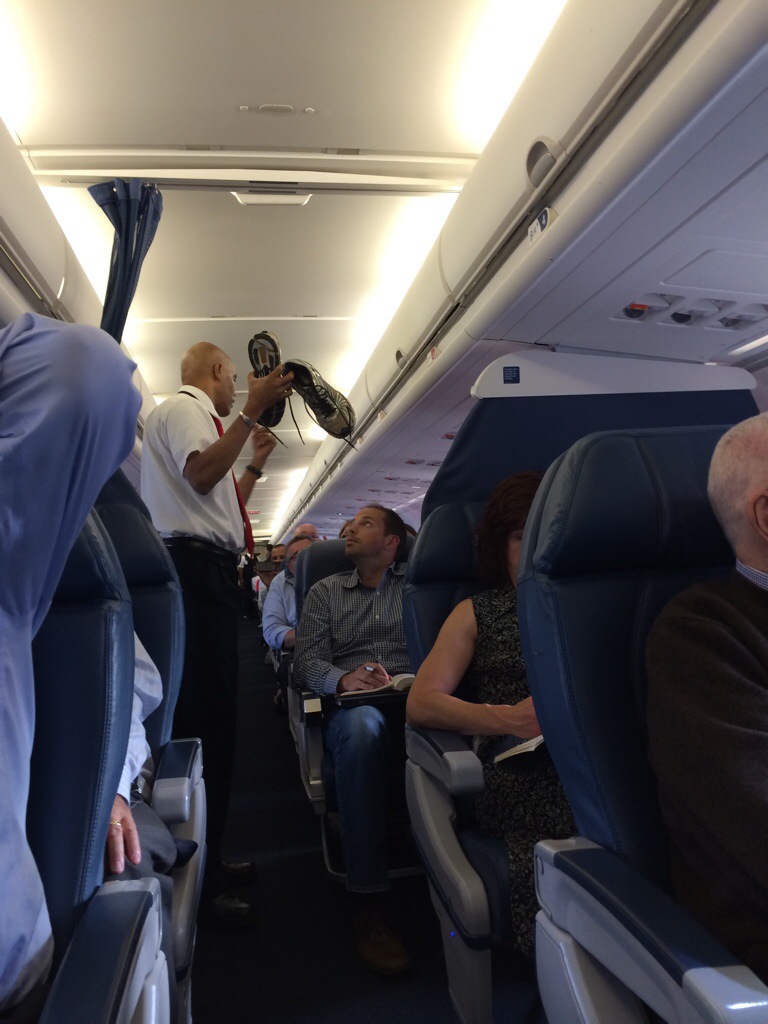 I got some really innovative and some very funny answers to my question “Guess what happened” with the picture of the flight attendant with two shoes in hand and every passenger looking at him. Bob was outrageously funny with his options of “Now push the plane” or “I was a Spanish forward” 😉

The reality was no less crazy. Somebody had left a suitcase at the gate drop area but it did not have the pink tag. All the carry on did not fit in the bins. So a few passengers had to get out, put the carry on suitcases near the plane door for gate drop. You are given a pink tag to identify your suitcase when you disembark. And this one did not have such a tag attached.

First the flight attendant announced for the passenger who did not pick up the tag to ring the “call attendant” bell. No response. Then he announced the same thing again. Still nobody owned up to the bag.

I figured he was going to just leave the bag at the airport. But I had figured him to be a less industrious person than he turned to be. As a next move, he simply picked up the suitcase in his hand and walked up and down the aisle asking passengers in every row if it belonged to any of them. Still no takers!! Then he came on the PA again “Okay, folks, I am going to do this again!” And yet again, he walked up and down the aisle with the suitcase. And yet again, he came up empty handed. I mean suitcase-handed 🙂 At this point of time, I had a vague suspicion that he was trying to keep us entertained as the flight kept getting delayed.

So, you are still wondering where do the shoes fit in, right? Well for a moment, he seemed to have left the plane. And in a minute he came back, with those two shoes in his hand and announced on the PA “In case you did not recognize your suitcase, you might recognize your shoes. They were in the suitcase!”. And he walked up and down the aisle. Not once. But twice over. And I was laughing my head out. To capture this incredible moment, I fished out my phone and took a few snaps.

That was too funny.

Wait! We are not done yet! Evidently the suitcase had met a really really determined flight attendant. After a few minutes, he again reappeared – now he had some toiletries (like Old Spice After Shave) in his hand and went around trying to find their owner!!! As you can imagine, at this point of time, we were almost rooting for the plane to have a few more delays. And I am sure, if the owner was there in the plane, there was no way in God’s green earth he was going to admit it!! Unfortunately, the pilot announced that we had received a wheels up time.

My friend gave up on his search and left the suitcase at the airport and off we went.

I wanted to take a picture of him and hand him one of those “Job Well
Done” card that Delta gives us to give to appropriate staff. But, out of courtesy to people who had connections, I sat back till most of the plane had emptied. And lost my friend for ever in the process. By the time I came out, he had left the plane or at least was nowhere near the door.