A couple of days back, I was making coffee for Sharmila and the inlaws and observed something. First, as a background, my FIL has great intellectual curiosity and has the most open mind to learning new things among my parents and the inlaws. And he is the eldest of them all!

I had set the milk carton down to fix Sharmila’s coffee. My FIL read up everything written on the carton box and then pointed the part that I have attached a photo of explaining to my MIL – “Taar maaney je goru-ke antibiotic khaoano hoini emon gorur dudh tomay deyoa hochhey”. And added “Aar amader deshey to sokaley uthei bachhagulo duto antibiotic kheye nay” 🙂

Roughly speaking, it means – he explained to my MIL that the milk you are being given comes from only those cows who have not been administered antibiotics. And then added that, back in Bengal, kids wake up in the morning and first thing they do is take a couple of antibiotics 🙂

It is funny only if you realize the culture in Bengal. (Not sure if this is true for the rest of India). In Bengal, everybody over 12 years is a self-declared doctor. Given that almost all medicine is over the counter, people gorge themselves on medicine (the knowledge of which is gained thru crowdsourcing with their friends) at the slightest sign of the oncoming of an ailment. Especially “Thanda laaga”. Or “ombol” for that matter 🙂 (common cold and indigestion).

It would not have been this funny to me had it not been the morning call to my brother where he talked about his elder son having dripping nose. “School jaabey?”, I asked. (“Will he go to school?”). He responded “Hnah! sokaley ekta antibiotic charge korey diyechhi”. I am not even going to bother translating that 😉 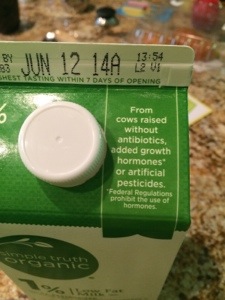