I always learn! At the weirdest times of the day. From the most unlikely persons.

This morning, I had one of those dreaded very early morning flights. I had put my alarm for 4:15 am. Turns out I did not need to bother. Due to my ongoing jetlag, I was up by 3:30 am already.

Got ready, came down and hailed a cab by 4:45. And told the cab driver to take me to the nearest Starbucks first. In about ten minutes, we were there. The Starbucks had barely opened. Bought him a coffee and got myself one. And then started chatting with Naftali, my cab driver on the long drive to the airport. I am glad I did. He was very funny and extremely knowledgeable.

I asked him about Uber. As you know many cities are trying to ban Uber (I guess this is cutting off the revenues that cities get from selling those taxi decals). I wanted to see what he thought about this new emerging competitor. I was stunned by his in depth financial analysis of why Über is good both for the customer as well as people like him. I learnt from him that Maryland is in the process of giving license to Uber to operate. He will become a Uber driver then!

I was so impressed by his analysis that I asked him about his background. Turns out, he is from Kenya. Given the strong connections that India has with Kenya, we quickly found some common grounds to talk about. Cricket, of course, was a common interest topic. I understood from him that Kenya’s soccer is in a bad shape because it is a very politicized institution. But they are big rugby players.
I noted that of all the former British colonies that adopted cricket, Indian subcontinent is the only part of the world, that never adopted rugby too. He had a prompt analysis for that –
“You know why? Because you guys are too skinny”.
I laughed out loud.
“No no, you guys have great genes. Your girls are so beautiful”.
“Really?”, I asked.
“Absolutely. But you know what I do not like about the skinny beautiful Indian girls in Kenya”?
“No. But do tell me”
“Man, they never look at us. Indian girls will only marry Indian boys. They never marry us”
I laughed out so loud this time that I almost spilled my coffee on my lap!

Found out that he is one of eighteen siblings. Eighteen!! His dad has two wives. Simultaneously. I was almost going to ask him if the punishment for multiple marriages in Kenya was multiple sets of inlaws but I bit my tongue. Here is another interesting fact I learnt. Kenya is 86% Christian and they are now legalizing polygamy. There is a law that is getting worked on for this. I was pretty surprised. I was wondering whether the gender ratio was messed up so bad that they had to make a law for this. Found out that by prevailing customs, the eldest wife got the lion’s share of inheritance. To bring equity and fend off future problems, this law is being passed to make sure all wives get equal parts of the inheritance.

From there we moved on to my favorite subject – geopolitical issues. After understanding how much effect the challenges in Ethiopia, Eritrea and Somalia are having on Kenya, I asked him about corruption. Of course, it is high. But I learnt another thing from Naftali this morning.
“We copied one thing from India on this front”
“And what is that”? I asked.
“We have set up shame sites”.
“Shame sites?” I was bewildered.
Evidently, in Kenya they have websites where you can post clandestinely taken recordings of people taking bribes and post names and stories of bribe taking incidents to shame them in front of everybody including their families. I did not have the faintest idea that this is a common practice in India!!

By this time we had already reached the airport. It was very early and I could not find anybody nearby to take a picture of us. So, I took a selfie of us!!! And promised to give him business next time I am in town. 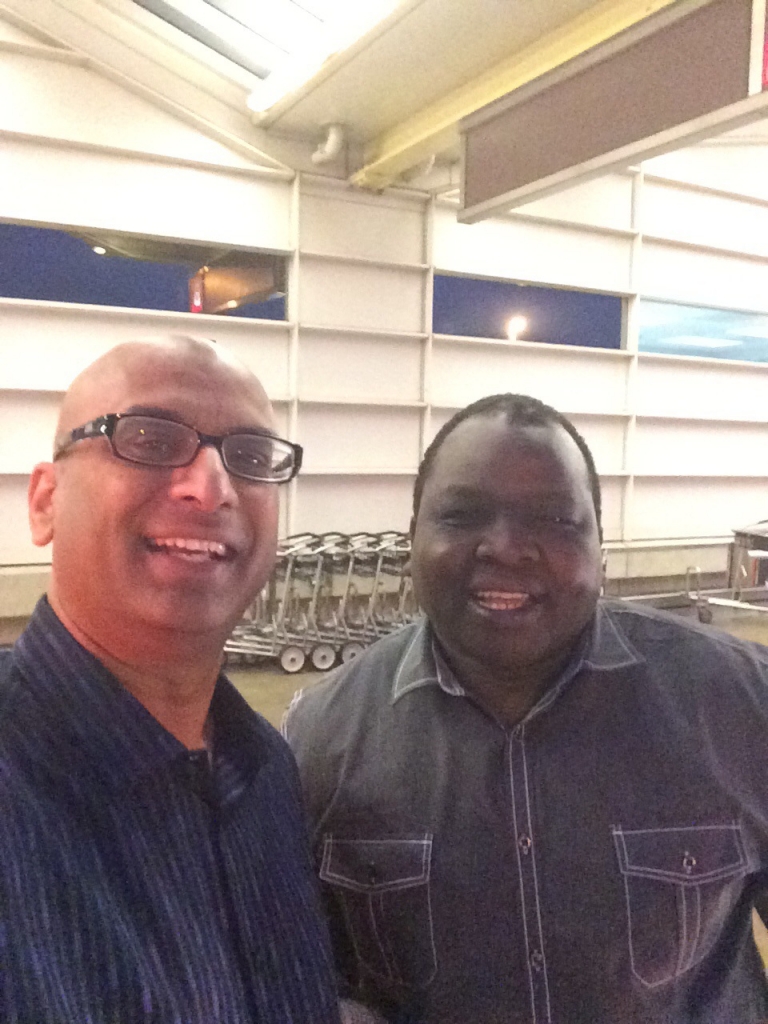 Posted May 1, 2014 by Rajib Roy in category "Intersection Points", "Travelogs