Profile of a Rajib

There is this young guy – you can see him in the picture – who I see at times downstairs in the building that my dad lives in Kalyani. My sister had mentioned that he is the security guy during night time. His shift starts from 11 PM to 6 AM. Which is why I do not see him that often when I am at my dad’s place.

But in the past, he has helped me a couple of times. Most of the times, he took pictures of my brother and myself after the early morning run as we stretched in front of the building. This time, my curiosity got the better of me. He is a very young and very likable person. I wanted to hear his story.

So, on Friday, I went down early – around 5am. Dad was still sleeping. And we were not going to run since we were to head out to Kolkata in the morning. My brother and I offered him a cup of tea and started getting to know him.

We hit it off very well straightway for two reasons. His name is also Rajib and his hair has been thinning out rapidly at a very early age too 🙂 The rest of the story was pretty humbling. I do not think the story is any different from millions of other families in India or for that matter in America. But getting to know somebody who lives that life is always a setter of perspective. I wish my daughters were around that day just to appreciate how blessed we have been.

My first question was why was he working as a guard instead of studying. We got to know that he is indeed doing both. He is doing his undergraduate in Arts (that would be English, History and Political Science in India). He is preparing for his first year exams. So, that would make him around 19-20 years, as I reckoned. Fortunately, in India, basic education can be much cheaper (even on a relative basis) than America. So, he is not working to put himself thru school. He has to do it to support his family.

Found out that his dad sells fish in the market. His mom is the maid servant in the flat (apartment) right opposite to my dad’s. He is the eldest of four siblings. And to support the family, as an eldest son, he is working during night to make some money.

I asked him about how did he manage his sleep what with college and working at night. Found out that while there are some days he gets no sleep, most days he can will himself to sleep for a couple of hours in the morning and a couple of hours late evening regardless of the weather and sound level. And then he often utilizes the boredom of sitting in a place at night to finish off his studies.

So, I asked him, what would he like to do when he grew up. “Be a teacher”, he was very sure. I asked him why? That is not necessarily the most high paying job that he can go after. He talked about a few teachers in his school that had inspired him and he apparently always wanted to be like them. And then he said something that my brother and I later discussed at length on our drive back to Kolkata. He said “More than money, I want respect”. I could not think of a better tribute to teachers worldwide.

Such a nice, soft spoken person. So determined to make something out of himself. I have little doubt someday he will be a great teacher.

In a reversal of roles, my brother then took a picture of him with myself! 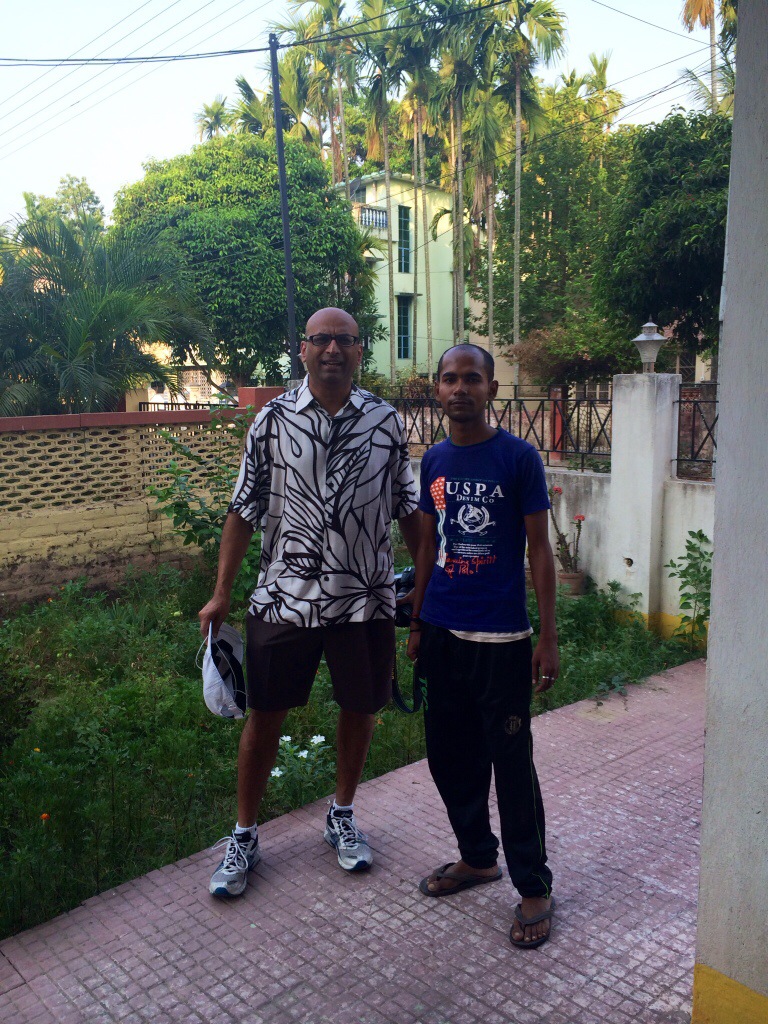