As I narrated in my previous post, my brother and I were desperately searching the internet for Panchgorah school. Which is not an easy feat given that the internet access was dog slow and Panchgorah is not exactly a household name. So, I asked my dad if he remembered how he went to that school those days. He said he got down at Simlagarh station and walked along the station road to the other side of GT Road for about a kilometer.

However, Google maps showed no such road on the other side of GT Road. Totally confused, we decided to go that station anyways. We figured it must be a very small road – too small for Google maps to show. When we reached there, we realized why Google maps did not show such a road. Because there is no such road!!!

My dad was overjoyed that he might see his old school but he was equally adamant that he was sure about the directions. I got down from the car and started making some enquiries. One person seemed to know where Panchgorah was. He asked us to go to Tinna More and take a left turn. Not having anything else to do, that is exactly what we did.

Now, as I was fiddling on my iPhone Google maps to see where that road at Tinna More led to, sure enough, I came across Panchgorah. And there was a landmark for Panchgorah school too!! No wonder we never found it. We were searching for it in the wrong place. By the way, later my dad claimed that he remembered that he used to take a bus from the station to Tinna More.

The road from Tinna More to Panchgorah is hardly a road. It is basically a large collection of potholes held together by slim lines of bricks and asphalt. Have you ever opened up Google Maps on your iPhone and shaken the iPhone? You will notice a popup comes up asking for feedback and such. Well, the road was such that every half a minute Google started asking for feedback. And my dad, was completely convinced we were on the wrong path.

But we did reach there eventually! My dad walked into the school and introduced himself as the principal from 1959-1961. He mentioned a few names of teachers from those days and a few of the staff indeed recognized those names!! He was an instant hero!! All the teachers and the principal came out and introduced themselves. He was ushered into the principal’s office and the two principals – separated by 55 years – chatted about the school endlessly. As you see in the picture, the current principal brought a notebook out and wrote down some of the school’s history as dad related them.

Meanwhile, I had become a small time hero too as I took hundreds of pictures in my camera and iPhone to digitize the memories. All the students thronged around me and were giggling and chatting rapidly. They had never seen a camera that large (I had my 300mm zoom lens on), or such a grown up person wear shorts like them, or somebody who shaved his head. I overheard an older student explaining to a younger one as I snapped a few more shots on my iPhone – “eta notun dhoroner camera” (this is a new style of cameras). He obviously would have been stunned if he saw me making a phone call with that camera 🙂

Eventually, it was time to go. We bade goodbye, walked back to the road and once we reached the car, I asked for a few minutes. There was a beautifully pond and I wanted to take a few shots. I am glad I did. In about three minutes, an auto rickshaw came up, an elderly person jumped out and the following conversation took place:

Saying so, he touched my dad’s feet. You can see in the picture my dad putting his hand on his shoulder and wishing him the very best!! Evidently, the news had spread in the village that an old principal called Abhay Roy had come. and this student of my dad happened to still live in the same village. He heard about it and came running along!!

My dad was just unbelievably happy at the turn of events! He came back all the way reciting from his memory “Chhatrodol” (“The Students”) by Kalidas Roy. I had never heard this poem before but it seems very well written. I need to look it up. 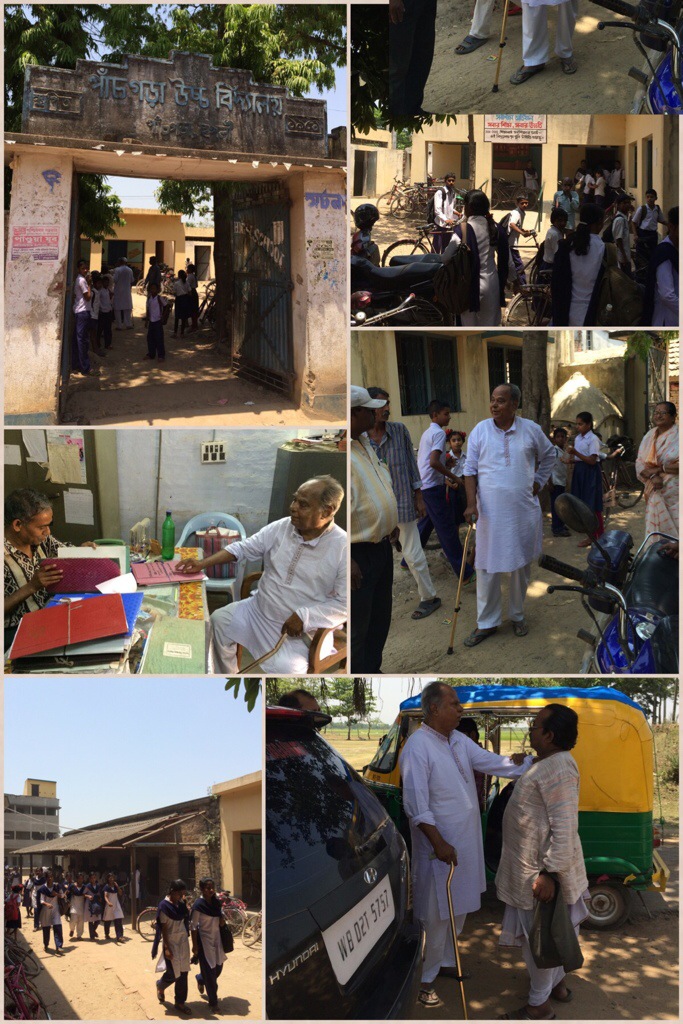