Oh! come on! Life is too short

You folks remember a recent cartoon picture of mine that I got done? The one that, as the venerable Narayan thought, the artist put the bulb inside my head instead of outside? I am attaching a small version of it here.

Well, I carefully packed that picture in a tube and got it to India. I wanted to give it to my parents. I was hoping they will slide it under that big glass top they have on the study table along with all sorts of other memorabilia – including pictures of me from news paper clippings and other felicitations. You know, I thought it would put a smile on their face every time they saw it. It is a funny picture. And if they cared to think a little more deeply, they should take great satisfaction from the fact that they have raised a son that has no qualms about making fun of himself.

Ah! That is where I went wrong. The wrath of Bengali parents towards anybody who makes fun of their son is writ large in their personas. Even if it means it is their own son making fun of himself!

First I asked my mom if she could recognize the person. Confidently, she replied “Pronob Mukhujje”. I am like “What? For starters, he has hair. Second, why would I carry a Bengali politician’s picture in my suitcase?”. Finally, when I told her, she said that there is nothing funny about how I look and stormed off to the kitchen.

Somewhat deflated, I went to my dad and showed it to him. He kept on thinking for a few minutes but could not come up with anything. So, I told him it is a caricature of my face. His response was “artist-er hathta ekhono paaka hoi ni” (“the artist has not matured yet in his skills”). And by the way, he would have nothing to do with putting that picture anywhere in his house.

Now this poor picture is going to make a long haul back to America with me. I thought about giving it to my sister or sister-in-law. I am sure they will reject it outright out of fear of my parents.

But fret not!! I have my revenge planned out already. You see, every December, I make one of those large photo calendars and send one each to all my relatives – parents, in laws, siblings, brother-in-law etc. Every page has multiple pictures of Sharmila and the daughters and myself. The idea is to remind them about the family far away. I also put every family member’s birthdays and wedding anniversaries – there are about 25 entries or so. The idea is the family members should not forget to wish each other on those special dates.

Well, this time, I am first going to get a few more cartoon pictures of mine drawn. And then, in every page, along with some nice pictures of Sharmila and the kids, I will insert one small cartoon picture of myself. I want to see if they will I put it up on the wall. They will be torn between showing off their family in America to all guests who come by and having to admit that their son looks funny 🙂 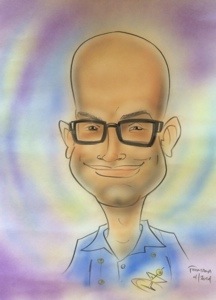