It was worth breaking my own rules!!!

“There is a glass of wine with your name written on it here”, read the text message from Rupak. It was 9:30 at night. I had just finished up my work for the day. I was wondering what to do for the last thirty minutes before I hit the sack. I was certainly feeling bad that I had skipped the party Rupak and Jasmine had thrown to celebrate Rupak’s brother-in-law Swarup’s (who was visiting from Melbourne, Australia) 40th birthday. But I am too stuck up in my ways to eat late and sleep late. Plus Sharmila and the daughters were there in full force anyways.

However, Rupak – may his tribe increase – hit me at the right time. I was wondering what to do and I realized once I saw his text message that I had not had any wine that evening. So, off I went, throwing caution to the winds.

I was introduced to his sister Rupa and brother-in-law Swarup and their really really cute small daughters. I had spent most of the time with their 16 month old when Rupa showed us a special video she had made for Swarup’s birthday. She had done, what I thought, was a fantastic job in stitching together a lot of old memories of Swarup – right from his birth all the way to birthday greeting videos from his friends all over the world. I was really surprised by how well she had done it – especially while keeping it a secret from Swarup.

Finally, I spent some time with Swarup. As always, I tried to see if I can find some “intersection points”. Of course, I had learnt a lot about his past from the video.

My opening shot was “Which DPS in Delhi?” (DPS is the school he went to; there are multiple branches)
Swarup: “The oldest one . Mathura Road”
Dead end 🙁 All the ones I know are from RK Puram.

I remembered from the video that his first job was in Hind Motor.
Me: “So, do you know Mr. I.R. Sharma?” (He was my high school classmate’s father; high up in Hind Motor management and I had met him a couple of times)
I again struck out. The timelines did not match.

And so the discussions went.

And then I remembered his engineering college.

So I asked him: “Which batch?”
Swarup: “1995”
Me: “I see. By the way, would you know a Chiradeep Roy from your batch?”
Swarup (excitedly): “Of course. We were great friends. We used to eat together.. hang out together… how do you know him?”

Instead of answering his question directly, I told him “Wait”. Then I fished out my iPhone photos and picked out an old scanned black and white picture. Zoomed in on one face and asked “Did he look like this?”
Swarup – after a few seconds – “Yes. But he had glasses”.
Me: “I know. This picture is 12 years younger than when you knew him”.

And then I panned to another face in the photo and zoomed in.
Me: “Do you recognize this face?”
Swarup kept thinking.
I helped him a little. “Imagine the hair is gone”.
Swarup recognized!! “Is this you?”
“Indeed!”, I said and then panned to the rest two faces in the photo and added “and those are our parents!!”

“CHIRADEEP IS YOUR OWN BROTHER”????? Swarup was just floored.

For the next few minutes, he kept on asking if he was my “own” brother. A distant cousin, a relative… was more believable. But meeting the elder brother of your close friend from college twenty years later on the other end of the world from where you live… now that was an unbelievable coincidence.

See, this is why I believe in “intersection points”.

Rupak, thank you for saving that glass of wine for me. I got to know my dearest brother’s dear friend from twenty years back!!! It went down very well with that fine wine!!! 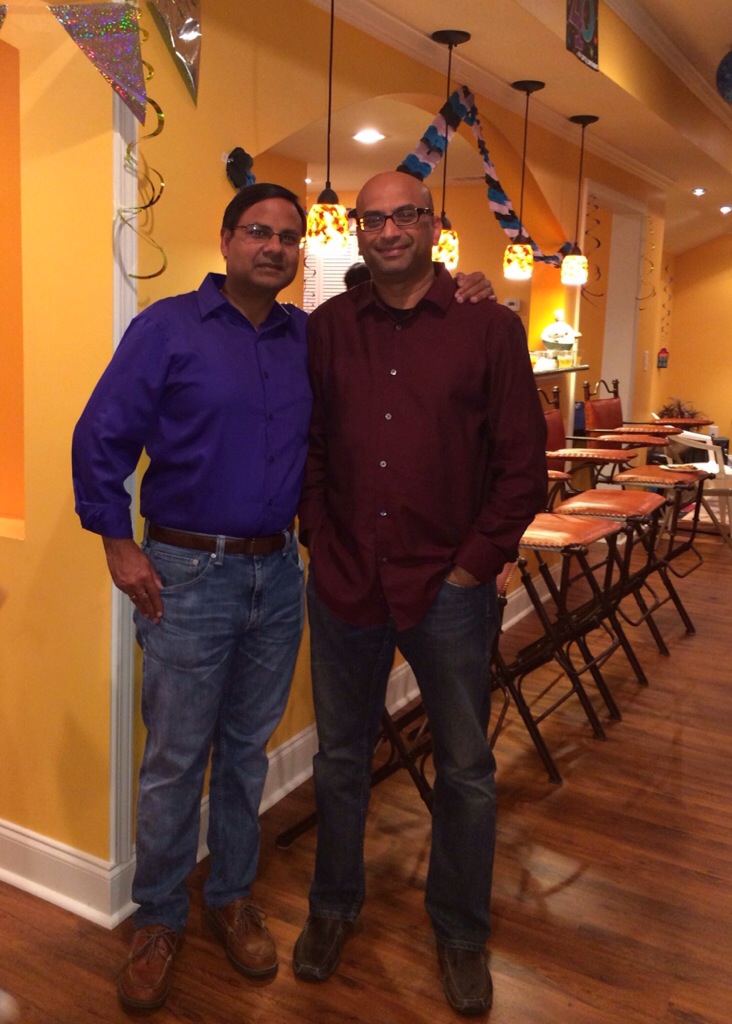