This time, in my hometown Durgapur, there was a Marathon Run that was organized by a local club. I was mildly surprised since running – let alone marathon – is not that popular in India in general, my sleepy hometown in particular. Nevertheless, I decided to participate (I was already running 10 km everyday after I landed for vacation). First let me point out that you should not get fooled by the naming. While called “marathon”, it was really a half-marathon – 21 kms. For the uninitiated, “Bengal” refers to the state that we are from. 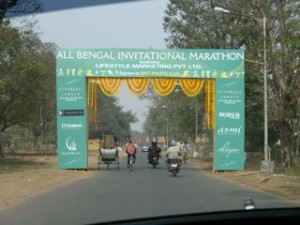 In any case, my decision to participate caused great consternation in my family. Nobody in my family could fathom that a 42 year old would be running for 21 km. My dad took sleeping pills the previous night and went to sleep 🙂

When I arrived at the running place, there were a lot of surprises in store for me. First, unlike here in USA, when they said they will start at 8 AM, they were merely saying that somewhere around that time we will get started. When I enquired, they said they are waiting for the VIP to arrive. Some minister came and started the run – so we had to wait for an hour for him.

The lineup itself was a lot of fun. I was the 42-year old. Next there was a 33 year old (who did not finish) and then a 27-year old. Most everybody else were 17-23 years old. They were getting completely confused by me – most of them mistook me for an organizing official 🙂

It was also a lot of fun watching these kids pushing each other to get their feet on the chalk-mark of starting line. Nobody wanted to stand behind anybody. Everybody wanted to be the first to get started. As if over a stretch of 21 km, starting a foot behind, would unduly pose an insurmountable gap that they could not cover. Most of these kids also bowed out by the 8 km marker. (Out of about 350 participants, 72 or so completed).

Running on the roads was pretty much like here in USA. There were the folks gathered to cheer; kids running out of their houses to see the spectacle; the volunteers and pilot cars and ambulances. In addition we had the stray dogs once in a while getting in our way. A side story to all this is that since I did not go from USA prepared for a long run like this, I did not have my water bottle belts and other such paraphernalia. Most people were impressed that I refused all the water that the volunteers were offering and ran without a single drop of water. What they did not know is that if I did drink any of that water, I would be running at twice the speed looking for the nearest toilet. (I stick to bottled water while in India after a few – let’s just say – “learning experiences” 🙂 )

The real attraction for everybody was to get an award from Sourav Ganguly. India is a cricket crazy country. One of their most successful captains – now retired Sourav Ganguly – hails from Bengal. Bengalis of all age and groups are absolutely nuts about Sourav. He cannot do anything wrong in their eyes. Every failure of his was due to a bigger conspiracy somewhere else. Bengalis usually forget their otherwise lacklustre performance as a state in almost every aspect of life by just bringing up Sourav in any conversation. (btw, before Sourav it was the Nobel prize won by Rabindranath Tagore 🙂 ) That said, Sourav was indeed a very fine cricketer and a very successful captain.

Nonetheless, I did finish the race – nowhere close to getting recognized by Sourav though!! I finished at 2 hour 3 minutes. While that was my career best half marathon, the winner was a 20 year old marathon runner from North Bengal who finished it at 1 hour 11 minutes!!! I was impressed. This year I am determined to increase my speed.

In any case, my whole – extremely worried – family was there was at the finish line. There was more of a sigh of relief that I did not die halfway rather than rejoice. Nonetheless, it was immensely satisfying to finish the race (and watching the twenty-year olds drop out at every mile-marker) 🙂 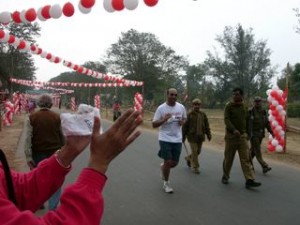 In case you are wondering what the security guys were doing around me, they had come there for Sourav Ganguly!!